As recently as four to five years ago, Ontario corn producers were still applying 85 per cent of their nitrogen (N) fertilizer pre-plant, according to Ian McDonald, the crop innovations specialist with the Ontario Ministry of Agriculture, Food and Rural Affairs (OMAFRA).

But natural pools of nitrogen have plenty to offer, and McDonald believes if producers don’t wait to soil test or judge the impact of weather on the crop’s early development, they might be missing an opportunity for improved N management.

Back in 2001, McDonald and OMAFRA’s then-corn specialist Greg Stewart decided to evaluate levels of organic N across Ontario’s soil zones. “Most N went down as urea or urea ammonium nitrate (UAN) applied on bare ground before the corn was planted. We wanted to raise awareness of how much organic N was available from the natural pool across Ontario,” he says.

“We did that on an annual basis in the hopes of better understanding how the natural pool was mineralized, and to give people other options than throwing all the N up front. Pre-plant N application works from a time perspective but doesn’t give producers much opportunity to use management thinking to customize the rates based on a sound knowledge of the year’s yield potential,” McDonald says.

In 2016, the survey morphed into the “N Sentinel Project,” a three-year Grain Farmers of Ontario and Growing Forward 2 sponsored effort designed to improve current tools for estimating N fertilizer requirements. Instead of visiting dozens of sites the team focused their analyses on 23 dedicated sites across clay-loam, loam and sandy soil zones.

“In the past, we were just haphazardly going out and sampling fields across the province and it wasn’t a very organized or targeted process,” McDonald says. “It was a one shot-in-the-dark per year analysis, and we felt that although it was giving us generalities, it wasn’t able to answer the important questions that needed to be answered on an annual basis.”

What are those questions? The researchers are mostly interested in discovering the impact of weather patterns on the mineralization of the natural N pool each year, as well as the effects of previous cropping practices, temperature, moisture and soil type on background N levels.

Sites are established with zero N (max 30 pounds of N per acre) in a starter band and a full-rate non-yield limiting commercial N rate. Each site is sampled four times per year between May 1 and July 1, and has its own weather station installed by Weather Innovations Network, which processes local weather data and hosts results on a dedicated website.

All sites, McDonald says, will have two replicates of the zero and full N treatments harvested for yield at maturity. “This will allow a calculation of the delta yield for each location that measures yield response to N rate,” he says. “This will also provide a [maximum economic rate of nitrogen] MERN for each site and a calibration of the [pre-sidedress nitrogen test] PSNT taken at the mid-June sample timing.”

In the previous soil N survey, he notes, there was no correlation to crop yield and thus no way of determining whether the PSNT taken to generate the survey was in the ballpark of predicting what the crop needed for economic yield.

“We have more info being generated on each site than in the past,” McDonald agrees.

In 2015, the corn survey generated surprising results: soil N levels were “considerably higher” than previous years’ data, due to an unusually dry spring.

“In 2016, the results were closer to normal, or maybe just above,” Rosser says. While the season began with cooler than normal temperatures, it warmed up by June.

“With an overall average of 11.2 [parts per million] ppm in 2016, soil nitrate levels tended to be average or slightly above average relative to the five previous survey years (2011-2015), while slightly lower than 2015 values, which were well above normal,” states the team’s 2016 field crop report, before recommending normal N application practices.

But recommendations should never be taken as holy writ, the authors again caution: “Soil nitrate values are highly influenced by the environment and agronomic practices. For instance, if you are in an area which has received significantly more rainfall than other parts of the province, you may have also experienced more loss than is reflected in these results.

McDonald believes producers are beginning to realize the value of managing N application more tightly, thanks to their use of Internet and social media resources promoting the practice — and the genetics they’re employing.

“The biggest change that’s occurred is that the genetic potential of new hybrids has really increased, and with that, producers are understanding how important nitrogen management is to achieving that yield potential,” he says.

A previous version of this article originally appeared in the October 2016 edition of Top Crop Manager East. 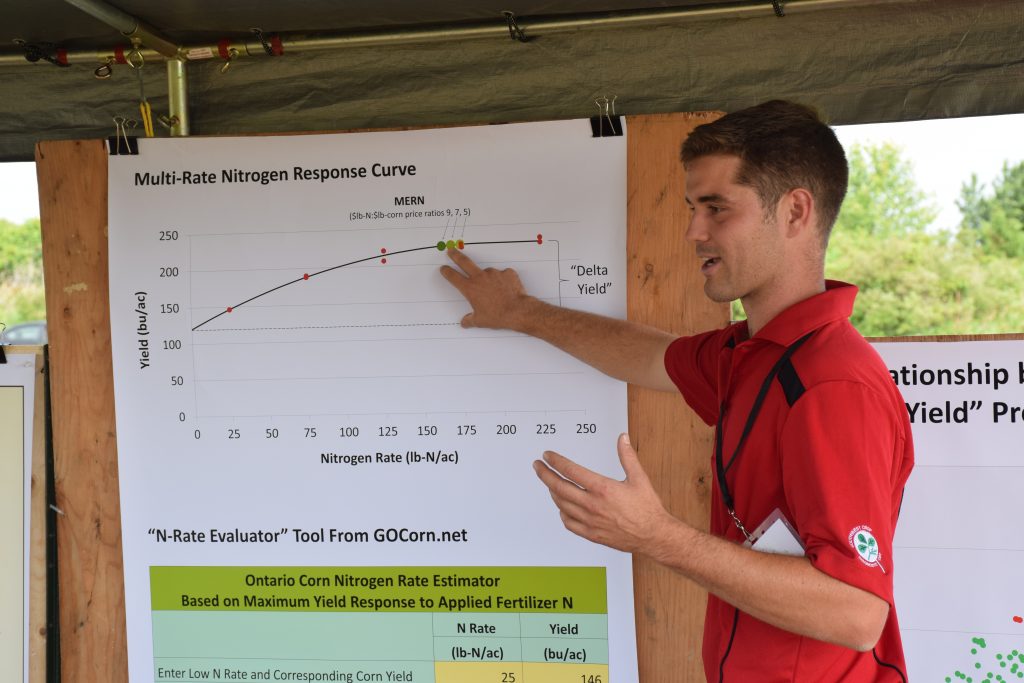