Some diet books have claimed modern wheat breeding has produced changes in wheat varieties that are causing harmful effects to human health. But University of Saskatchewan researchers have already determined that some key nutritional characteristics in wheat have actually changed very little from the varieties grown 150 years ago to today’s varieties. Now these researchers are teaming up with a University of Alberta colleague to delve into another important aspect of this issue: Have wheat gluten proteins changed over time? 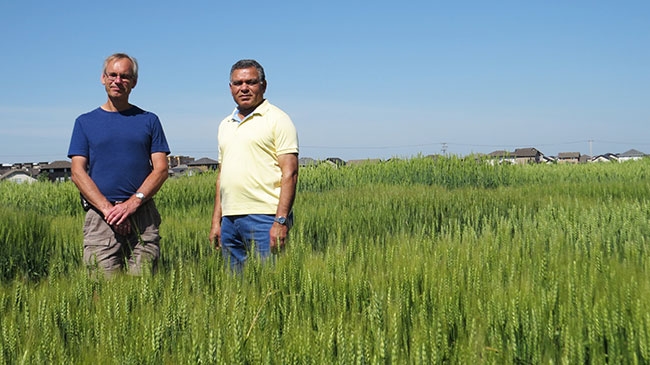 Ravindra Chibbar (right) is collaborating with Pierre Hucl (left) and a University of Alberta colleague to see if gluten proteins in wheat varieties have changed over time. Some diet books have claimed modern wheat breeding has produced changes in wheat varieties

“We are trying to see if there is any science behind the claims,” explains Ravindra Chibbar, a professor at the University of Saskatchewan (U of S) who is leading this research.

Recent studies
His studies so far involve nutritional analyses of grain samples from 37 hard red spring wheat varieties dating from the 1860s through 2007. These varieties are part of an ongoing field experiment to measure the rate of improvement in Prairie wheat varieties over time. The experiment started in 1989 and involves replicated trials in central Saskatchewan. U of S professor Pierre Hucl leads this experiment, and he has selected representative varieties for each decade since 1860. The oldest of the 37 varieties is Red Fife, a well-known Canadian heritage wheat.

In 2015, Hucl and Chibbar published some results from their analyses of the agronomic, processing and nutritional characteristics of these varieties. They found that traits like grain yield, kernel weight and several milling and baking quality characteristics improved from the heritage wheats to the modern varieties, but the total protein concentrations changed very little.

Since 2015, Chibbar and his research team have been conducting detailed studies of the starch and mineral characteristics of the grain from those same 37 varieties. They have completed the lab work and are now analyzing the data and preparing a manuscript for a peer-reviewed scientific publication.

They examined starch granule size, structure and digestibility because these factors relate to some of the negative claims made about wheat consumption and weight gain. Chibbar explains that starch digestibility is a very important factor in weight gain and obesity. “The calories stored in starch are released when starch is digested in the gastrointestinal tract. In calorie-deficient regions of the world, grain starch and protein need to be more digestible so people can extract all the benefits from the food to meet their daily requirements. In calorie-excess regions, lower starch digestibility [would help overweight and obese people to manage their weight].” He adds that starch digestibility is also the concept behind the glycemic index, where lower digestibility means a lower glycemic index.

Chibbar notes that each wheat variety has its own specific starch characteristics, so the data vary from variety to variety. However, based on his preliminary data analysis, the trend lines for these characteristics show little change over time.

The trend line for total starch concentration shows a slight increase from 57.8 to 61.5 per cent over the past 150 years. He says, “This increase was expected because starch increases when we increase the grain yield and we have made significant grain yield increases since 1860.”

To assess changes in starch digestibility, Chibbar’s group determined the concentrations of the two major components of starch: amylose and amylopectin. “We are still analyzing the data, but we see a slight increase in the amylose concentration, from 25.5 to 27.5 per cent. This is a good thing from our viewpoint because amylose, a long glucan polymer, is hard to digest; therefore an increase in amylose concentration can reduce starch digestibility. In contrast, some diet books have said that amylopectin, which is easy to digest, has significantly increased in modern wheat varieties. But we have not found that in the hard red spring wheat varieties in our study.”

Chibbar’s group determined the concentrations of calcium, iron, zinc, selenium and manganese in the grain samples using the VESPERS (Very Sensitive Elemental and Structural Probe Employing Radiation from Synchrotron) at the Canadian Light Source synchrotron at the U of S. The mineral concentrations differ from one variety to the next, but the only statistically significant trend from the heritage to the modern varieties is a slight decrease in the calcium concentration.

Chibbar is now analyzing the data to see if there is a dilution effect on the mineral concentrations. “This theory of dilution is that, because starch has increased in modern wheat varieties due to grain yield increases, the minerals become diluted. On the other hand, a study in the United States comparing soft wheats with hard wheats found that this dilution theory only held true in soft wheats because soft wheats have more starch and less protein than hard wheats.”

The iron concentration has a slight decreasing trend that is not statistically significant. As a side note, Chibbar points out that his study is analyzing the meal from the grain samples, whereas all white flour sold in Canada must be fortified with certain nutrients, including iron. The Canadian Food Inspection Agency’s website states: “The mandatory enrichment of white flour with B vitamins, iron and folic acid is a cornerstone of Canada’s fortification program aimed at helping to prevent nutrient deficiencies and maintain or improve the nutritional quality of the food supply.” Under these requirements, Canadian white flour must contain 4.4 milligrams of iron per 100 grams of flour.

Next: a closer look at gluten
When water is added to wheat flour, certain proteins interact with each other to form gluten. Gluten gives wheat dough its elasticity and plasticity, which enhance the quality of baked goods. Also, gluten extracted from wheat, referred to as “vital gluten,” is added to other food products to improve their characteristics.

Gluten is of particular interest to Chibbar because it can have health impacts in some individuals. For people who are genetically predisposed to celiac disease, gluten consumption triggers an immune reaction in the small intestine. As well, wheat consumption in some people is associated with non-celiac gluten sensitivity.

Some research studies have found an increased occurrence of celiac disease in the last half of the 20th century. The reasons for this increase are unknown. Various possible contributing factors have been suggested, such as increasing amounts of vital gluten in our diets, increased per capita wheat consumption, changes in wheat genetics and changes in agronomic practices, such as nitrogen fertilizer practices.

Some diet books have suggested the increase in celiac disease is due to an increase in gluten in wheat varieties in recent decades. But Chibbar’s findings show the total protein concentration in the study’s hard red spring wheats has increased by only about one per cent in 100 years.

However, he wondered, “Have there been changes in the types of wheat proteins?” To answer this question, Chibbar and Hucl are collaborating with Dr. Leo Dieleman, a gastroenterologist at the University of Alberta. Funding for this new project is from Saskatchewan’s Agriculture Development Fund, the Western Grains Research Foundation and the Saskatchewan Wheat Development Commission.

The first stage in this project will be to see how the severity of celiac disease relates to the many different kinds of gluten protein fragments (peptides) in wheat. The researchers will be determining which specific peptides evoke a celiac-related response using serum samples from celiac patients.

The University of Alberta’s Centre of Excellence for Gastrointestinal Inflammation and Immunity Research collects serum samples from its celiac patients. Once Dieleman and Chibbar have the necessary ethics approvals in place, they will have access to samples from this serum collection. Dieleman’s research team will identify five or six patients for each of three categories of celiac disease: severe, moderate or mild. Then they’ll provide those patients’ serum samples to Chibbar for testing with the wheat gluten peptides.

After Chibbar’s team has identified the celiac-disease-causing peptides, the next step will be to determine if the amounts of these peptides have changed from the heritage to modern varieties in Hucl’s set of 37 varieties. If it turns out that these peptides have not increased, then that would help refute the claim that changes in modern wheat varieties are somehow responsible for the increasing incidence of celiac disease. On the other hand, if these peptides have increased, then that trend could potentially be reversed through targeted breeding, and that might be very helpful in the prevention of celiac disease.

In another component of the project, Chibbar’s group will determine the amount of these disease-causing peptides in current western Canadian wheat varieties. They will be comparing 100 varieties that include all Canadian market classes of wheat.

In addition, the project is looking even further into the past than the 1860s. The researchers will assess the amount of the celiac-disease-causing peptides in five varieties of three ancient wheats – emmer, spelt and einkorn – and in canaryseed. Canaryseed does not cause an immune response in celiac patients, so the researchers are using it as a check for comparison.

Chibbar and his colleagues have also applied for additional funding to identify the wheat genes that play a part in the occurrence of the celiac-disease-causing peptides and then use genome editing technologies to reduce the amount of these gluten fragments in wheat.

The long-term goal of this research is to develop wheat varieties that have minimal or no celiac-disease-causing proteins but retain all the great end-use properties.

Chibbar believes nutrition and health objectives will play a part in wheat breeding objectives. “The upcoming trend is to reshape agriculture for health and nutrition. This concept was put forward in 2012 by the International Food Policy Research Institute. And with evolving technologies – such as being able to analyze minerals in very small quantities like we did with the Canadian Light Source, and techniques to look at proteins as we will be using in our new project – and with evolving knowledge in genomics and other areas, I think there is good potential that those nutritional and health objectives can be achieved.”