Slow to germinate seeds can be vulnerable to fertilizer induced salt damage.

Over the past two years, in areas of the prairies that were wetter and
colder than normal at the time of seeding, I have encountered a number
of fields seeded to barley or wheat that were very slow to emerge from
the typically tight, clayey soils. Excavation of the seedrows indicated
a higher than normal degree of germinated but weakened seeds. The
resulting plant stands were usually much thinner than expected.

Wheat seedlings emerging through a distinct layer of ‘hair-pinned’ crop residues.   In a wet spring, the coulter opener used for no-till seeding had a great deal of difficulty slicing through the damp residues of the previous pea crop. In cases where the previous crop was canola, crop emergence was improved compared to the pea stubble.

Guidelines developed cultivated soils
The limits for seedrow applied urea-N were developed by Westco
agronomists on soils that were cultivated. That meant that the seedbeds
would have been warmer and better aerated than no-till soils. These
guidelines have been adopted by government agencies in the prairie
region and are available in many extension publications.

Subsequently, the Westco researchers expanded these guidelines to
accommodate the higher rates of seedrow urea-N treated with Agrotain.
The recommended rates for the treated urea-N were approximately 50
percent higher than for untreated urea.

LEFT: Delayed, diseased and variable wheat growth is achieved adjacent to the area where the soil had been bared of crop residues. In this area adjacent to that, the same excessive rate of seedrow applied urea-N had been applied. The grower reported that the same excessive rate of seedrow applied urea-N, using the same coulter opener, produced excellent crops during the prior year.
RIGHT: Excellent crop establishment in a no-till field in an area where the surface crop residues had been inadvertently removed. This stand had been achieved despite the fact that it had been treated with the same seedrow rate of urea-N that significantly exceeded the rate recommended in the guidelines. The displacement of the crop residues allowed the soil to warm more quickly and the crop to emerge more rapidly, thereby reducing the risk of fertilizer salt induced damage.

Do the guidelines apply to no-till and direct seeding?
Because of the excellent seedbed moisture usually associated with direct seeded and no-till fields,
numerous growers have told me that they were able to exceed the
official seedrow-N guidelines with no sacrifice in plant stand
establishment. Under normal conditions, this could be expected since
the amount of moisture present within the seedbed has a significant
role to play in dissipating the urea-N, which at least initially is
quite soluble, away from the seedrow. For that reason, one could
generally predict that slightly more urea-N could be applied within the
seedrow for crops sown under no-till or direct seeding conditions.
However, that is not true in all conditions.

Some problems encountered on no-till and direct seeded fields
During the early part of the growing season, in the past two summers, I have encountered either no-till or direct
seeded fields that were performing poorly in terms of achieving an
acceptable level of plant stand density. In all cases, the urea
fertilizer blend was applied within the seedrow and in all cases, the
spring weather was unseasonably cold and rainfall was above normal.
Also in all cases, in the previous year, the growers had applied the
urea-N at rates that had exceeded the published guidelines and all
reported that they had produced excellent crops. In the following
problematic year, when they had applied the same or a lower rate of
urea-N in the seedrow, crop stand and yield performance were
disappointing. 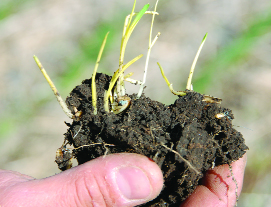 Very low seedbed temperatures implicated
It appears that under the adverse spring seeding climatic conditions
that were encountered, low seedbed temperatures significantly delayed
the amount of time required for germination and crop emergence to take
place. This left both the seeds and the seedlings more vulnerable to
disease pressure. There was ample evidence of the presence of diseased
seeds and seedlings, especially where crop residues were hair-pinned
into the seedrow where the seeds had not been treated and when the crop
was seeded too deep.

In portions of the field that were wetter and/or the load of residues present on the soil surface were greater, a greater percentage of the seeds died from disease infection. Note the bluish mould that was present on some of the seeds.

Unusual fertilizer damage
As a direct result of the delayed crop emergence, the seeds appeared to
have become much more vulnerable to some form of fertilizer damage than
would normally be expected given the moist soil conditions. In fact, in
some fields the plant stand density was greater in an unfertilized
check strip than in the fertilized area. This was a very puzzling
development, especially given the excellent results obtained with
higher rates of seedrow-applied urea-N in the previous years.

No evidence of ammonia toxicity damage
In the cases where the urea had been treated with Agrotain, researchers
confirmed that the rootlets did not exhibit the usual symptoms
associated with ammonia toxicity. That meant that the Agrotain had been
successful in preventing or retarding the conversion of urea and the
release of the seed-damaging ammonium form of N. It was therefore
apparent that ammonia-induced toxicity was not the culprit in these
fields. 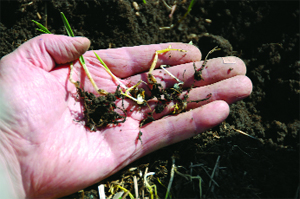 Guidelines accommodate some stand loss
All fertilizer materials are salt based and, in that regard, excessive
contact between the seed and the fertilizer can in fact damage and
weaken the germinating seedlings. In developing the seedrow urea-N
guidelines, the researchers allowed for a maximum of 15 percent plant
stand loss in establishing the upper limit of urea-N placed with the
seed.

This level of plant stand was thought to be acceptable since the
crop should readily overcome this temporary setback by quickly and
aggressively responding to the very favourably located fertilizer
nutrients.

Illustration of the types of wheat seedlings that were struggling to emerge from the seedrow in a tight, clayey soil under a no-till cropping system. The spring of 2007 was abnormally cold and wet in this region.

Encourage rapid crop emergence
When ‘pushing’ the upper limits of seedrow applied urea-N, it is
critical to get the crop germinated and out of the soil as rapidly as
possible. That means seeding the crop as shallow as possible to ensure
germination, potentially
waiting for the soil to warm up before sowing the crop, carefully
managing the uniform re-distribution of crop residues, rotating crops
in order to avoid over-loading the soil surface with crop residues and
in some cases, using an opener that will deflect some of the crop
residues away from the seedrow in order to enable sunlight to warm the
soil. 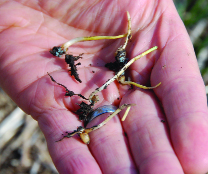 Risk of fertilizer salt damage amplified in cold soils
Indications are that if the soil seedbed is quite cold, the seeds will
be slow to germinate and the crop will also be much slower to emerge
from the soil. Under those conditions, it appears that the risk of
fertilizer-induced salt damage can become much greater than under
normal seedbed conditions. This increase in risk occurs as a direct
result of the slow to germinate seeds being exposed to the negative
impact of being directly exposed to the effect of fertilizer salts on
the surrounding soil solution.

This is the type of weakened, diseased wheat seedlings that were struggling to emerge from a residue covered no-till field in a cold, wet spring. Hair-pinning of pea crop residues from the previous crop as well as the underlying wheat residues from the wheat grown two years prior produced plenty of disease carrying inoculums to infect the semi-dormant seeds.

Word of caution warranted
No-till and direct seeding growers need to be made aware that the
fertilizer salt related risks associated with applying the higher rates
of seedrow of urea-N exceeding the recommended guidelines, when the
soil is cold and wet, can result in unacceptably poor stand
development. In fact, in very wet and cold springs no-till growers
should consider reducing the seedrow applied rate of urea-N, regardless
of whether or not the urea is treated with Agrotain. Another
consideration when dealing with an unusually wet, cold spring would be
to use a seed/fertilizer opener that creates some blackening of the
soil surface directly above the seedrow in order to facilitate a more
rapid warming of the seedbed.

Cold, dry seedbeds can also be problematic
Phil Thomas, a highly respected agricultural consultant, states that in
2007, “I did get quite a few calls about poor stands where in nearly
every case the cause was deep and/or high speed seeding into cold,
drier seedbeds. Deep seeding and/or high speed seeding, which mixes
seed and fertilizer, stresses developing seedlings. This makes them
more susceptible to infection by soil seedling blight organisms that
kill them just before or just after emergence.”

John Harapiak has more than 40 years of western Canadian based fertilizer related experience. He will continue to contribute stories to Top Crop Manager. He can be contacted by e-mail: jharapiak@shaw.ca, telephone: (403) 281-3132.