Features Agronomy Other Crops
Are soybeans truly the ‘resilient one’?

No signs yet of a single limiting factor. 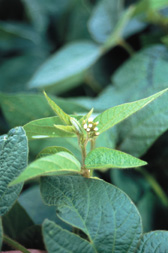 If there was ever a year that might just push soybeans – not to mention
growers – to the limit on the question of resiliency, 2004 had to be one
for the record books. By the end of August, widespread belief across much of
the primary growing area of Ontario was that yields would again be far below
the long-term average. Cool, wet temperatures had left plants, which were about
to go into leaf drop, with fewer pods and very little inside.

Then came the warm, sunny and dry days of September, and as they have in 1999,
2000, 2002 and 2003, the soybeans bounced back. Initial yields were reported
to be in the high 30 and low 40 bushel per acre range, with 40 to 50 bushel
per acre yields through Huron and Perth. The quality of IP soybeans was also
a pleasant surprise.

All of this raises the question: Are soybeans unbeatable? "Absolutely
not, but they are extremely resilient," says Horst Bohner, soybean specialist
with the Ontario Ministry of Agriculture and Food. "It comes back to the
number one factor for soybeans, generally speaking around the world: moisture.
If you give them enough water, they will do incredible things, despite aphids,
despite many diseases, or despite no-till, or a cool summer as we had in 2004.
If you give them enough moisture and half a chance, they will really come through."

The only year in the past five that soybeans experienced a large-scale hit
to production was in 2001, a year when the crop came under fire from not one
but three stresses, including soybean aphids. In fact, Bohner suggests there
is a strong link between rainfall amounts in any one year, and soybean yield.
"If we were to look back at weather data from the last 40 years and predict
soybean yield strictly on how much rainfall we've had, I'll bet it'd be fairly
close," says Bohner, acknowledging the fact that rainfall amounts are cumulative.
Records may indicate 50mm of precipitation in one month, yet fail to show that
most of it fell over a period of a few days. "I'm still convinced that
when you look at any major dip in the provincial yield, it was a dry year or
an extremely cold, overly wet year."

Adaptability through physiology
In many ways, the ultimate success of soybeans comes as a result
of the plant's unique physiology. "On the one hand, it is a plant that
can develop a single stem if it's planted in a thick stand, or it could develop
branches if it's spaced out," explains Dr. Istvan Rajcan, a soybean breeder
at the University of Guelph. Soybeans are indeterminate, meaning they flower
and continue producing new nodes over an extended growing period. Over the course
of three weeks, usually starting in July, soybean plants are at their flowering
stage. If the plant is allowed to spread out, it develops more branches and
leaves. "Since the flowers are formed at the axis of leaves, obviously
the more branches you have, the more leaves you will have, and more places for
these flowers to grow."

But branches and flowers do not form all at once. While a hot, dry spell of
one week can cause those flowers that are in full bloom to abort, the weather
in that week is unlikely to affect the leaf and flower development potential
of the entire plant. "It will still have the ability to develop new flowers
and it will have developed other flowers in the week previous," says Rajcan.
"So they can compensate yield and have those conditions by the fact that
the flowering extends over three weeks or sometimes even four weeks. Another
important asset of the soybean plant is its ability to fix nitrogen from the
air in a symbiosis with nitrogen-fixing rhizobia. That gives them another tool
in meeting different environmental challenges."

Indications become clearer with time
The 2004 growing season also benefitted from delayed planting, which helped
in the early stages of fall when the plants had enough energy to make use of
the available light, heat and moisture. Had conditions allowed for the usual
planting window, or if September 2004 had been warm but with greater cloud cover,
yields may not have rebounded as they did.

For Rob Templeman, 2004 will go down as one more year in which soybeans proved
their resiliency, more so than previously thought. And although he is impressed
at the plant's overall ability, it does underscore other points worth considering.
One is the impact of stress. "Soybeans seem to handle one stress well,
however, the impact of sequential multiple stresses can hammer yields,"
says Templeman, field agronomist with Pioneer Hi-Bred. He notes that growers
often try to define that one key stress that can damage a stand and ultimately
affect yield, but Templeman believes the impact from something like aphids is
a little overstated. "When I think of the combination factor, I think we
can say with some confidence that aphids are a lot more damaging under drought
stress than they are when there is enough moisture."

To that end, it may not be the second stress itself as much as the timing of
its arrival on an already stressed plant. In 2001, it was not heat and drought
and aphids that hurt the crop, it was heat and then drought stressing plants
already ravaged by aphids; a number of successive stresses as opposed to a cumulative
impact.

Another surprise year in 2005
"In many ways, 2005 was a surprise again: soybean yields were better than
feared considering how dry it was," says Bohner. For those that received
timely showers, the incredible heat and sunshine resulted in excellent pod set
and outstanding yields. "Many fields in Oxford and Perth counties came
off in excess of 50bu/ac. I know some producers who didn't have a field under
65bu/ac. However, where it was extremely dry, yields were disappointing, as
was expected. On the whole, yields are roughly average to slightly above average
across the province," he adds.

The other underlying issue is the mind-set that says 'soybeans are an easy
crop to grow'. From year to year, says Templeman, yield limiting stresses may
not be an issue and if they do appear as a single event, the soybean plants
most often suffer little yield loss. What that does is divert attention and
diligence away from scouting and proper identification of diseases and pests.
Ontario has seen an increase in soybean cyst nematode, phytophthora root rot
and other serious conditions. And now, soybean rust is in North America (see
Awareness is essential for soybean rust, page 32, January 2005 Winter
Issue). "It's like anything, that if you beat it up enough, it will succumb
and we've been wrong to think it wouldn't," says Templeman. "We've
just never been faced with that stress-after stress-after stress type of scenario,
year after year."


Related
Rock ‘n’ rolling soybeans
Soybeans in Saskatchewan?
Heat, sun and moisture – striking a balance
What can we expect from soybeans after a dry year?