The answer depends on your objective. 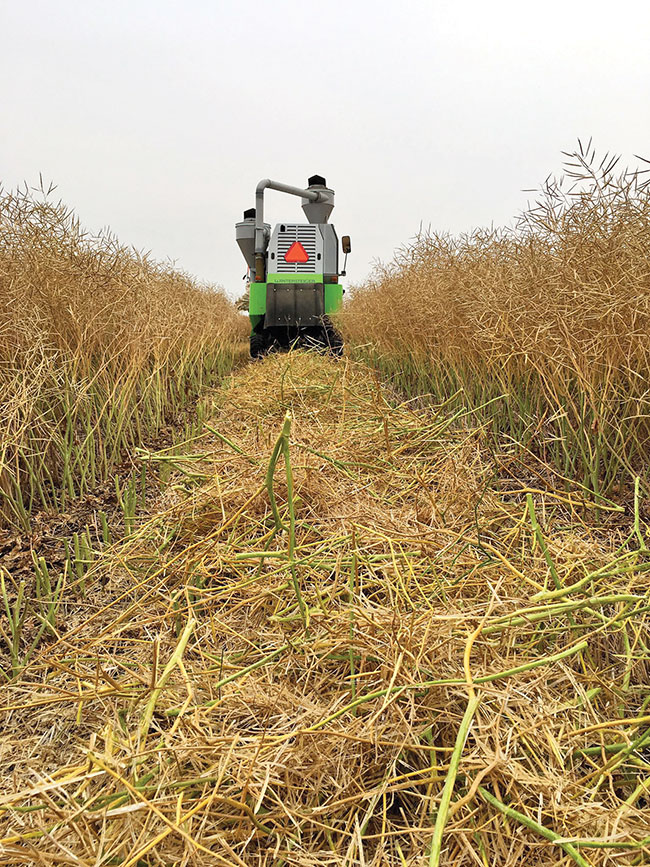 Going without a pre-harvest or desiccant application can be a viable option. Photo by Chris Holzapfel

With roughly 50 per cent of canola now straight-combined, the practice has become common place with growers. What is lesser known is whether straight-combined canola needs a pre-harvest application or a desiccant to help make the operation more successful. A three-year research trial in Saskatchewan and Manitoba looked into that question.

“Whether there was a benefit to a pre-harvest application really depended on individual circumstances such as whether there was uneven maturity, perennial weeds present, lots of green straw or weeds, or if the harvest was entering into a stretch of wet, cool weather,” says lead researcher Chris Holzapfel with the Indian Head Agricultural Research Foundation. “What we did find was that going without a pre-harvest or desiccant application was a viable option for early seeded, relatively uniform and weed-free fields seeded to a pod shatter tolerant hybrid.”

Field trials were completed in 2017, 2018, and 2019 in Indian Head, Melfort, and Scott, Saskatchewan, and Melita, Manitoba. In each year, a Liberty Link and a Roundup Ready pod-shatter tolerant variety was grown. For the Liberty Link varieties, pre-harvest treatments included glyphosate, Heat (saflufenacil), glyphosate plus Heat, and the desiccant Reglone (diquat), along with an untreated control. In the Roundup Ready varieties, pre-harvest treatments included glufonsinate ammonium (unregistered application), Heat (saflufenacil), glyphosate plus Heat, and Reglone (diquat), along with an untreated control. These were applied in a minimum of 20 U.S. gallons per acre to ensure adequate coverage, except for glyphosate applied alone at lower water volumes.

Timing of the pre-harvest treatments were targeted for 60 to 75 per cent seed colour change for glyphosate and Heat applications or approximately 90 per cent seed colour change for glufosinate ammonium and Reglone. Holzapfel says that the wide range of environmental conditions and variation in treatment application and harvest timing provided a robust evaluation of the treatments.

Variable results by year and location
Using Indian Head results as an example, the three-year whole plant moisture average saw the untreated control with the highest moisture content at 36.2 per cent, and the lowest with Reglone at 26.8 per cent. This was to be expected since Reglone is the only true desiccant among the treatments. Glyphosate plus Heat was the next lowest at 29.8 per cent. Glyphosate alone and Heat alone were intermediate in whole plant moisture content. However, the results varied by year with 2017 showing no difference between treatments (including the control) with 2018 and 2019 showing some differences with Reglone always significantly lowest of all treatments.

Similar to whole plant drydown, seed moisture content at Indian Head during the dry 2017 harvest season was similar between treatments ranging from just under six per cent to around 7 per cent moisture content. 2018 and 2019 was variable between treatments. The three-year average showed that Reglone had the lowest seed moisture at 10.4 per cent, glyphosate plus Heat at 11.1 per cent, glyphosate alone at 11.4 per cent, Heat alone at 12.0 per cent and the untreated control at 12.6 per cent.

The effect on green seed at Indian Head was not statistically significant. All treatment including the control had similar green seed content averaging 0.3 to 0.6 per cent.

The trends in whole plant moisture content, green seed and whole plant drydown observed at Indian Head were similar at other sites, depending on year, weather and crop conditions.

Holzapfel says that seed yield was the least important measurement for this agronomic study. He says that none of the products that were evaluated should impact yield if used according to label directions and harvest is completed within a reasonably timely manner.

“Yield differences between hybrids cold be reasonably expected but pre-harvest treatment effects would indicate either improper timing, reducing yield when applied too early as an example,” Holzapfel says. “We monitored for pod shattering but no substantial losses or treatment differences were ever noted.”

Similarly, seed size should not be effected unless a treatment was applied too early ahead of recommended crop staging, similar to what happens if canola is swathed too early. The data showed that pre-harvest applications had no impact on seed size at 75 per cent of the individual site years. At the other 25 per cent, there wasn’t any consistent pattern to a reduction in seed size among pre-harvest treatments or varieties. 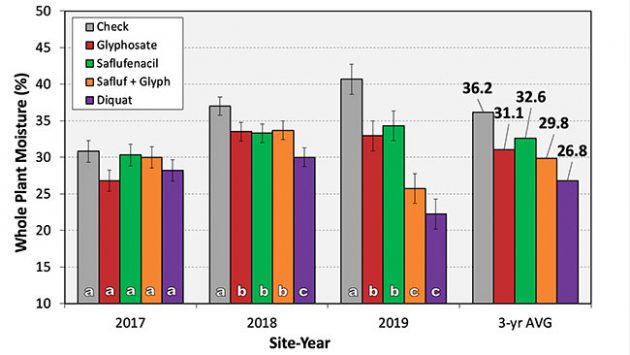 Advantages and disadvantages of the treatments
Each pre-harvest option brings advantages and disadvantages to the table. Glyphosate is relatively low cost, requires lower water volumes, provides excellent perennial weed control, and is unlikely to cause grading issues when applied at the correct timing. However, it has slow dry down activity and may not show any benefit for reducing green plant growth prior to harvest.

Tank-mixing glyphosate plus Heat increases the cost, but improves the speed of dry down compared to glyphosate alone. Glyphosate still provides excellent weed control in this tank mix. The research found that the dry down benefit was inconsistent on Roundup Ready hybrids, and higher water volumes are required for this product.

Holzapfel observed that with the Heat treatments, the upper stems and pods dried quickly, but the lower stems often remained green, likely due to lack of coverage.

Reglone, as the only true desiccant, provided the most rapid, consistent and complete dry down on both hybrid types. Holzapfel says the later application timing at 90 per cent seed colour change adds flexibility in the decision-making process so that if the crop is already uniformly drying down and good harvest weather is on the horizon, an application might not be required. On the other hand, Reglone does not provide perennial weed control and requires higher water volume.

“The pre-harvest applications generally were more of a benefit in areas with shorter growing seasons and higher moisture conditions where the stems stayed greener. Under those conditions, the seed moisture can often be low enough to combine and store but the green material can be hard to put through the combine and potentially contribute to green dockage and subsequent issues in the bin,” Holzapfel says.

On the other hand, even in southern regions, conditions that drag out maturity could result in later, green crops that would benefit from a pre-harvest application.

“Whether to apply a pre-harvest application really depends on field conditions. If you are squeezed on harvest timing, an application could help speed dry down of the green material to help speed harvest. But if the field is clean, relatively uniform, and there is a reasonable harvest window ahead, you could get away without one,” Holzapfel says. “It can go either way.”