It seems that higher commodity prices are here to stay, with a growing world population and a burgeoning middle class resulting in an increased demand for food and for higher-quality foods. But do higher prices mean that farmers will be able to enjoy an easier ride in 2012?

Many factors will affect how high prices go, as well as individual commodity crop prices. Final 2012 prices will depend on how the values of the Canadian and US dollars play out, supply and demand, the global economic situation and other factors.

With regard to last year, “The price of wheat fell a long way from its highs, while corn fell by less – but wheat has a disadvantage on the demand side,” observes Dr. Larry Martin, a senior research fellow at the George Morris Centre in Guelph. “Unlike corn, wheat is essentially a food crop and not generally used for animal feed and fuel, so fewer supply and demand factors affect it.”

Martin notes that the US government recently removed one of its subsidies for ethanol, and it’s anyone’s guess if manufacturers will be able to withstand this market change. That means demand for corn for ethanol production may dip. “Many people have also been saying for years,” he adds, “that ‘in three years, cellulosic ethanol will be produced on a large scale,’ but who knows when that will really happen.”

One thing is for certain – Martin foresees that more land will be used to grow crops like soybeans and corn, and that there will be less land for horticulture, squeezing supply and driving up the price of crops like peas. “With demand for meat declining domestically and demand for vegetables increasing, I think there will be continued diversification of crops grown on farms,” he asserts. “The price will always be a factor in how much of a given crop is grown, but we’ve seen the price of peas increase as the prices of soybeans and corn have risen.” Todd Austin, the marketing manager at Grain Farmers of Ontario, adds that the price must be worth the effort. “If someone wants to buy something like edible beans from Ontario farmers, they will have to agree to pay an appropriate amount,” he says.

“We may see more linking of producers and end-users in these lower-acreage markets.”

Martin, Austin and Maurizio Agostino (a managing commodity strategist at Farms.com based in London, Ontario) all predict that along with prices continuing to be high, they will also continue to be volatile in 2012. “South America has been dry due to La Niña, and many analysts are downgrading corn supply down there,” Agostino notes. “Yes, Argentina only makes up about three per cent of global production, but it’s the second largest exporter of corn to Asia, next to the US. However, this rally in grains could fizzle if weather turns around. It’s tough to predict.” He says feed demand is very low right now, which depresses corn prices, but demand could pick up if the global economy picks up.

“On the other hand, a good corn harvest could see prices drop,” Agostino says. He observes that the information in US Department of Agriculture reports wasn’t terribly accurate over the last year due to weather factors. “In their May 12 report, they will make their first predictions about the 2012-2013 marketing year, and predicted prices are always higher in the first half of the season,” he notes. “They will then reassess based on weather, how the crop is doing, demand and so on.”

Another factor contributing to volatility, according to Martin, is the widespread use of just-in-time shipping. “When there are perceived temporary shortages from things like USDA reports, then people react by stockpiling to some extent, then demand goes up and prices go up,” he notes. “Then, when people realize there was no shortage they slow down with buying, prices drop, and so on.”

Impact on growers
Whether higher prices will mean easier times for farmers is a question, Martin says, that is best answered with another question. “It’s not the prices, but the margin that matters,” he says. “So, we have to ask how things like the cost of land and the cost of inputs are going to affect the bottom line. Farming will always be a margin business.” He says it is more important than ever that farmers develop both their crop management and financial management skills. “High prices drive high risk, and there is a lot more pressure – and opportunity – to manage a situation like that, than a low price stable situation,” he states.

However, Steve Duff believes grain and oilseed farmers today have been able to take advantage of the marketing opportunities even more so than a few years ago. “Farmers are much more market-savvy than they were, and much better equipped to take advantage of price volatility than ever before,” says the senior economist at the Ontario Ministry of Agriculture, Food and Rural Affairs’ Strategic Analysis and Planning Unit in Guelph. “They have a very good idea of their cost of production combined with access to a wide range of marketing tools and information technology.”

One factor that contributes to profit margins, which Martin thinks farmers should pay attention to, is government support. “I think growers should keep in mind that federal and provincial governments will not be able to provide the business risk payments they have been providing,” he asserts. “As we produce export products with higher and higher values to them, governments cannot keep up. They simply cannot do everything.” Duff agrees that the more the Canadian commodity market relies on exports, the more we will be affected by world prices on an individual and industry level, but he notes that in one way or another, government programs are all a function of margins.

The Agri-Invest Program, a national scheme available since 2007, allows farmers to contribute a small percentage of their earnings into a fund. The government matches their individual contributions, and farmers can later use these funds to manage growth or problems on their farms as they see fit. As well, the national AgriStabilty Program is available to those farmers who have had income negatively affected in some way. “In Ontario, we introduced the Risk Management Program for grains and oilseeds in 2007 and one for livestock in late 2011,” notes Duff. “It helps fill the gap between the cost of production and price of a commodity when the cost of production is higher.” He says all livestock farmers who applied got payments last year, but that was a unique situation. “The program had just started, and it addressed cost of production gap issues not just for 2011, but for 2010 as well,” Duff explains. “Most grain farmers didn’t get a payment because market prices exceeded the program cost of production.”

Duff concludes that the effects of commodity prices on farmers will always depend on how profitable and productive they’re able to be. “Commodity growers have recently had the opportunity to benefit from increasing global prices due to tight supply and high demand,” he says.

“Profits outpaced increasing input costs last year, and we didn’t have that situation during the years just before that. I think that going forward, supply will be reasonably tight and demand will stay reasonably strong, so we will likely continue to see strength in prices, certainly compared to historical levels, but such tight situations result in lots of day-to-day variations, and so that also means continued price volatility.” 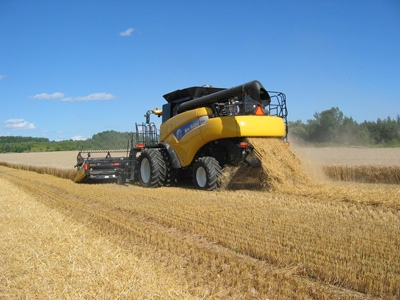