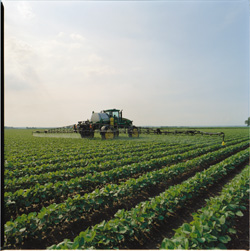 Extensive field tests conducted by John Deere agronomists in Brazil suggest
that growers should increase spray volume and spray at higher pressures to ensure
effective treatment against Asian soybean rust. Best results were obtained by
spraying 15gal/ac or more at pressures of 70psi or greater. Field speed, however,
had little effect on coverage. In fact, the percent of lower leaves covered
at 15mph versus five to eight miles per hour were nearly identical.

Many experts suggest fungicides must be applied within two to three days after
the first infection to protect yield, so growers may want to consider increasing
field speed to cover acres quickly once rust is identified. Deere advises, however,
that growers using older style boom suspension systems that might bounce at
higher speeds should slow down to ensure coverage.

It's not herbicide
Application specialist with AppliTech Canada, Ralph Walker emphasizes that when
spraying fungicides it is important to "Divorce yourself from 'herbicide
habits'." When spraying for soybean rust, use a similar technique to spraying
fungicides on potatoes. The real target is where the disease starts: the stems
and lower leaves where there is plenty of heat and moisture.

It is droplet velocity that enables droplets to penetrate to the target. He
suggests using a two-directional nozzle that produces larger droplets forward
and smaller droplets rearward. The Hypro TwinCap can accommodate two flat fan
nozzle. 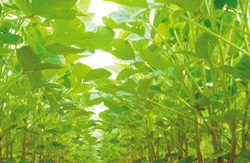 This advice is echoed by pull-type sprayer manufacturer, Hardi: It is best
to use medium spray nozzles with a standard flat fan or low drift nozzle, preferably
at 25psi to 55psi.

"Forward speed influences droplet behaviour: high speed increases horizontal
movement of droplets and drift, and decreases spray penetration into dense crops,"
says the company's sales manager, Wayne Buchanan. "It is an operator call,
as the density of the canopy will dictate the ideal speed. Ideally, we would
like to see the operator do a test using water sensitive paper placed into the
canopy at three levels so that he can see what he is accomplishing."