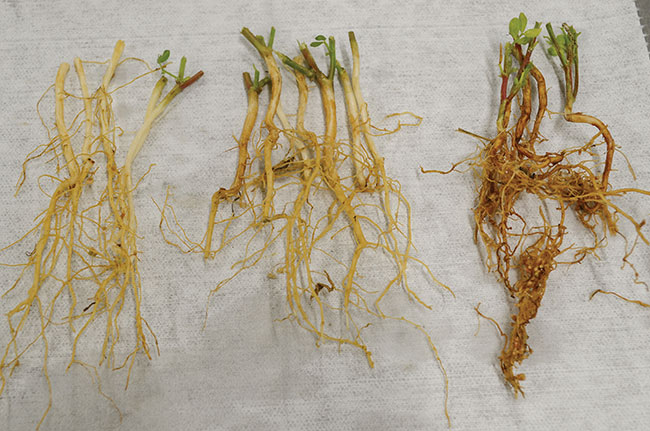 Aphanomyces root rot is caused by a soilborne pathogen, Aphanomyces euteiches, that is hard to detect and whose presence in a field is difficult to predict.

But the effects of this tricky pathogen on lentil can be severe, and management is difficult due to the pathogen’s ability to survive in fields for long periods without host plants. A. euteiches was confirmed in the Prairies only a few years ago, but it has likely been here longer, according to Sabine Banniza, a professor of plant pathology at the University of Saskatchewan’s Crop Development Centre (CDC).

She says producers in some areas of the Prairies have long struggled with root rot in their pulse crops without being able to pinpoint the exact source of the problem, but it’s possible aphanomyces has been present in Western Canada for many years.

“Identification of this pathogen from infected roots is not easy compared to other pathogens,” Banniza says. “There’s at least one other fungal pathogen that looks similar, so to confirm that it is aphanomyces root rot you have to use a molecular test.”

With the CDC’s Tom Warkentin and Bert Vandenberg, Banniza just completed a project on aphanomyces root rot (ARR) in lentil and pea.

Funded by Saskatchewan Pulse Growers, the project’s goals were to identify pathotypes of western Canadian isolates of the pathogen, screen lentil and pea lines from around the world to find sources of ARR resistance, and finally to create a breeding platform to develop new varieties of pea and lentil with ARR resistance.

Because ARR has been a recognized pathogen of pea in fields in the Pacific Northwest and in France for several decades, and of lentil since 2010, Banniza’s team worked with French and U.S. researchers to screen pea and lentil germplasm for resistance.

They found that Canadian field isolates of the ARR pathogen were far more virulent than U.S. isolates; as a result, lentil germplasm identified as having good partial resistance in the U.S. was susceptible to the disease when exposed to Saskatchewan’s more harmful isolates, Banniza says.

“Because we have, over the last two decades, worked with wild lentil species and found a fair amount of resistance to other diseases, we decided to systematically screen lentil’s wild relatives for resistance to ARR,” she explains.

One species of wild lentil in particular stands out, Banniza says, and it’s this species that will likely take a starring role when it comes time to make crosses.

Saskatchewan’s Agricultural Development Fund has funded the next stage of the research, which will see Banniza’s team developing molecular markers for screening lentil lines. Markers have already been developed for pea by French collaborators, but they don’t yet exist for lentil, she says.

They’ll screen germplasm not only for ARR resistance but for Fusarium resistance. Fusarium infection often occurs in tandem with ARR, and according to Agriculture and Agri-Food Canada pathologist Syama Chatterton, the most severe symptoms and crop yellowing show up when both diseases are present.

But the development of new lentil lines with improved disease resistance is a long time from realization, Banniza says. It might be another decade before these lines are in the field.

Aphanomyces root rot is caused by a water mould, or oomycete, plant pathogen.

Management
While the CDC’s lentil breeding program is the only one of its kind in Canada, other research is ongoing that will help producers with management.

Chatterton began conducting ARR surveys five years ago. A major part of her program involves determining the threshold inoculum dose in the soil that changes its status from “healthy” to “diseased.” In time, Chatterton’s team hopes to develop a soil risk analysis tool to help speed diagnosis. They’re also doing field trials – primarily with pea – assessing the effectiveness of seed treatments and a range of agronomic practices in controlling ARR in the field.

Chatterton says severity in the field varies dramatically year-to-year, largely depending on moisture levels. ARR has less of an impact in dry years. In 2017, a fairly dry year in Saskatchewan, disease incidence sat at about 26 per cent. But in 2016, incidence was at 60 per cent.

“When we look at disease severity, we rate on a scale of one to seven, with seven being dead. We would say we’re reaching an economic threshold of severity when we’re above a three,” she says. “On average across the Prairies, the disease severity for lentils is between around two to three in dry years, and in the wet years the average disease severity is higher at three to four.”

Currently, there’s only one seed treatment registered in Canada against aphanomyces in lentil – Ethaboxam (Group 22), trade name Intego Solo, but it’s only registered as early-season suppression, and Chatterton says it won’t be effective in heavily infested fields.

The most effective management tool against ARR is rotation. Chatterton says producers with ARR issues should rotate those fields away from susceptible pulses (pea and lentil) for at least six to eight years.

There’s little data on how long exactly the inoculum can thrive in a field. Chatterton points to one paper published in the 1990s that claimed the half-life of resting spores was about a year. “The researchers did some calculations to find that it would take about six to eight years to reduce resting spores below threshold levels,” she says.

Her team is two years into a study looking at the effect of alternate pulse crops on inoculum levels in the soil. It’s too early to make conclusive statements, but so far they haven’t seen those crops support aphanomyces growth.

Chatterton says producers should keep track of disease incidence and severity by field.

“Farmers need to be aware of how their crop did the last time they planted peas or lentils, keeping track of small yellow patches and noticing low spots where the disease usually starts. That can be difficult to keep track of, and that’s why we want to move toward a soil risk analysis system so we can take some of the guesswork out of root rot risk,”
she says.