One of the key challenges for winter canola production is very basic: crop survival into the spring. So a project with multiple sites in Eastern Canada has been evaluating the overwintering success of today’s winter canola cultivars, as well as testing several factors that might improve the crop’s survival and yield.

“I knew researchers had worked on winter canola in the past and found that it could work but didn’t work often enough. I wanted to see if there had been improvement enough in the genotypes that we might be looking at a better situation now,” says Don Smith, a professor in the plant science department at McGill University, who is leading the study.

The project started in 2013 and ran through two winters at five sites, for a total of 10 site years. All analyses and reporting are now nearly completed. The project is part of the canola and soybean research being conducted under the Eastern Canada Oilseeds Development Alliance (ECODA), jointly funded by Agriculture and Agri-Food Canada (AAFC) and industry. Smith is the scientific director of ECODA’s research network, involving more than 20 research agencies across Eastern Canada. His winter canola project was funded through AAFC’s Growing Forward 1 and Growing Forward 2 programs.

“A number of things came together in terms of increased interest in spring and winter canola in Eastern Canada,” Smith says. “The cash value of some of the small grain cereals that producers grow sometimes has been pretty low, so they were looking for cash crops that might pay better and they were interested in canola. Also, a few years ago a major oilseed crushing plant opened at Becancour, Que., providing easier access of oilseeds produced in Quebec and the Maritimes to crushing facilities; before that, the nearest crushing facilities were in southern Ontario. Also the St. Lawrence River at Becancour doesn’t freeze so you can bring in oilseeds by boat year-round, which is much less expensive. So that changed the economic landscape for oilseed production around here.”

ECODA focuses mainly on spring canola, with only a small amount of research on winter canola. “Winter canola is always a higher risk, with Canadian winters being what they are,” Smith explains.

Although winter canola is not as winter-hardy as crops like winter wheat, it does have some potential benefits for growers. “When winter canola survives the winter, it can yield quite well. Also, it provides ground cover through fall, winter and spring, protecting the soil from erosion,” Smith notes. “And winter canola starts to grow much earlier in the season [than spring-seeded canola].” Earlier growth means earlier maturity, which can be an advantage, for example, if fall frosts come very early or if the summer turns hot. He says, “Canola is a temperate zone crop so when temperatures get above about 25 C, the crop starts to get into problems caused by heat stress, such as floral abortion.”

One component of Smith’s winter canola project compared four varieties to see which ones performed best at each site. The five sites included one in Ontario (Ottawa), two in Quebec (west end of Montreal Island and south-east of Montreal), one in Prince Edward Island (Charlottetown) and one in Nova Scotia (Truro). Researchers in the ECODA initiative managed the sites.

There were small differences in variety performance from site to site, but no variety was dramatically better than another. “We found that we don’t yet have the genotypes that can survive our winters very well. We had survival in about one year in three or four, which is just not enough,” Smith says.

“We only had good winter survival when there was enough snow cover. A good snow cover will insulate the plant against the more extreme weather conditions in the atmosphere. So you could have plunging air temperatures of -25 C or -30 C, and – although it depends [on the snow pack’s characteristics] – the temperature might only be a few degrees below 0 C at the soil surface under a thick covering of snow. Without a snow cover, it can be much colder for the plant and that can be a challenge.”

He adds, “Winter survival can be tough, but spring survival can also be difficult. With the transition from winter to spring, you get transitions back and forth across 0 C. So you get melting snow and pooling of water in low spots because the water can’t trickle down into the frozen soil, and then the puddles freeze into ice. That is very hard on the plants.”

The project’s sites included a range of conditions, so overwintering success varied from site to site and from year to year. The site at McGill’s Agronomy Research Centre near Montreal had some of the best winter survival. Smith explains, “At the McGill site, the winter canola plots were in a small field ringed by fairly tall trees so the snow catch was generally good. The message that comes out of this is that it’s about snow catch.”

All of the five sites used conventional tillage systems. So a possible next step in this research would be to try no-till canola because the standing stubble from the previous crop has the potential to increase snow trapping.

The project’s results also confirmed that winter survival is affected by seeding date. Seeding has to be early enough for the plants to become sufficiently established before the first killing frost. The recommendation from Ontario’s agriculture department is that winter canola plants should have about four to six leaves and a root system large enough to withstand some frost heaving and drying winds. If you seed too late, then the plant might be too small to make it through the winter. However, if you seed too early, the plant might bolt in the fall and would not survive the winter.

For the study sites in Smith’s project, seeding dates in the first 10 or 15 days of September were usually the best. He notes, “That can vary, of course, from year to year. In 2015, warm weather persisted and persisted, so in a year like that you might be able to plant into the first week of October and it would still be okay.”

Another component of the project assessed the suitability of winter-seeded spring canola. Smith explains, “You can seed spring canola just before freeze-up in the fall or just before spring melt so the seeds don’t germinate immediately because the weather is too cold. When the snow melts in the spring, they’ll germinate right away. So the crop starts growing much earlier than spring-seeded canola.” So, like winter canola, winter-seeded spring canola would have potential advantages over spring-seeded canola due to earlier maturity.

“However, in our trials, very late seeded or very early seeded (onto frozen soil in both cases) spring canola had reasonable survival one year of the two when it was evaluated, which is not really good enough,” he says. Canola’s growing point is at or above the soil surface as the plant emerges, which makes it very vulnerable to early spring frost damage if the plant starts to grow during a warm spell and then gets hit by a cold snap. Cereals like wheat and barley protect their growing points by keeping them below the soil surface during their early growth stages.

Overall, Smith concludes, “We’ve learned that winter survival of winter canola is not there yet. But I think sooner or later breeders will develop winter canola varieties that have the right stuff and we’ll get there.” 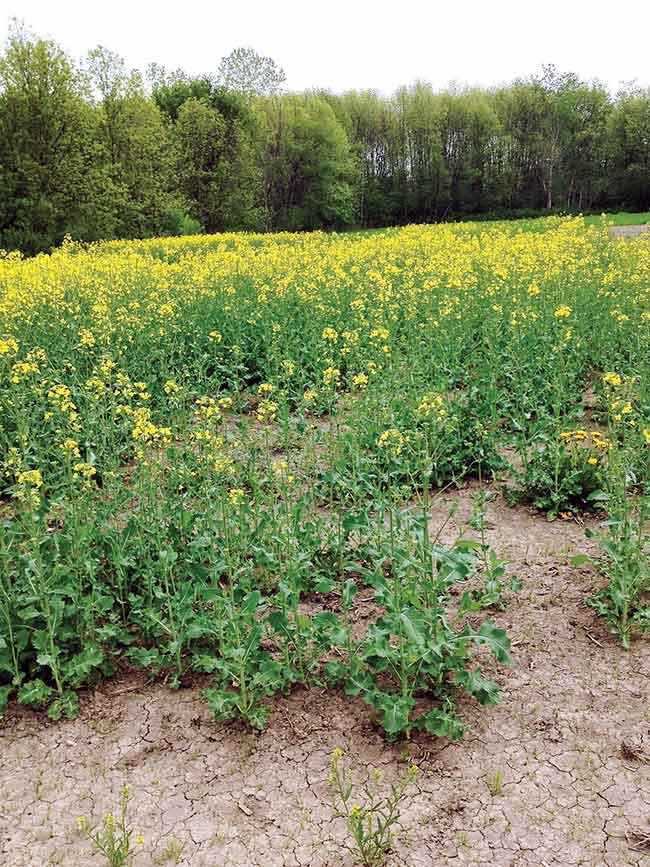