News
An artificial diet may make it easier to rear insects

February 10, 2016
By Entomological Society of America

Feb. 9, 2016 - Scientists who conduct research on insects need to be able to keep them alive, sometimes for many generations. That can be difficult, especially since members of many insect species are particularly picky eaters.

However, a group of Canadian entomologists may have found a solution, at least for scientists who are conducting research on moths.

They began by taking semiloopers in the subfamily Plusiinae and feeding them on the McMorran diet, which is named after Arlene McMorran, who created it back in 1965. Then they soon realized that many other species readily fed on a modified version of the McMorran diet. In fact, they successfully reared 39 different moth species on the diet -- some for multiple generations -- and they also tested it on other field-collected caterpillars that they reared until they metamorphosed into adults.

"[The McMorran diet] allowed us to quickly handle high numbers of field collected caterpillars of various species," the authors wrote. "It saved us tremendous time, space, and money because we did not need to grow plants, and we did not need to develop species based rearing knowledge as we were pretty much ensured that any Noctuidae would develop on this diet."

Their methodology and results are published in an article in the open-access Journal of Insect Science, which also includes a literature review of other insects that were previously reared using the McMorran diet.

"Because we believed that, like us, other entomologists may be interested in using the McMorran diet to ease their laboratory rearing of insects, we decided to do a literature search to find out the species that have previously been reared on this diet and publish this information," said Dr. Vincent Hervet, one of the co-authors. "Our paper highlights the use of an easily-prepared and stored artificial diet on which to rear a broad variety of phytophagous insects species, including 39 new species that we report in our study. According to information we found in the literature, it seems that the success of this diet is particularly associated with the use of wheat germ and linseed oil as ingredients."

Their literature review revealed that at least 103 Lepidoptera species have been reared on the McMorran diet, including species that belong to the families Erebidae, Gelechiidae, Geometridae, Lasiocampidae, Noctuidae, Pieridae, Pyralidae, Saturniidae, Sphingidae, and Tortricidae. They also learned that grasshoppers in the genus Melanoplus had been reared on the McMorran, and that many other insects had been reared on slightly modified versions, including the white pine weevil (Pissodes strobi) and more than 49 species of longhorn beetles.

These slight modifications "could potentially be used to rear many more phytophagous insect species that do not readily feed on the McMorran diet," according to Dr. Vincent Hervet, one of the co-authors. 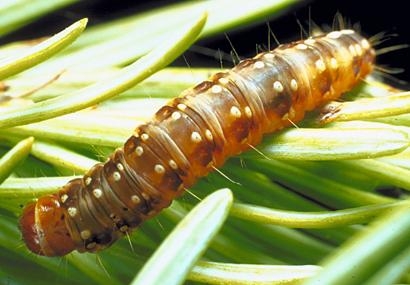 This is a spruce budworm caterpillar (Choristoneura fumiferana) An artificial diet may make it easier to rear insects.