November 6, 2014 - In Ontario, over 80 per cent of nitrogen (N) is still applied to fields as urea through spinner spreaders and is incorporated with tillage equipment. However, Ontario Ministry of Agriculture, Food and Rural Affairs (OMAFRA) applied research coordinator, Ian McDonald, and others would like to see more N applied as a side dress in June.

“In the latter strategy, management decisions are made based on weather, crop performance, expected yield and so on,” he explains, “and the N application rate is targeted based on these conditions. When all the nitrogen is applied ‘up front,’ there is no way of making adjustments based on yield potential relative to current conditions.” Indeed, a later N rate decision can be very different than the N rate decision made before the crop has even been planted.

Many producers are reluctant to side dress, however. The reasons are many, including time and speed restraints, weather, herbicide application timing and a desire to avoid tramping emerged corn. “The reality is that side dressing, for those who are used to it, fits nicely in their system, lets them adjust N rates and doesn’t tramp much crop,” notes McDonald.

“We wanted to do a study to demonstrate that later applications of N could fit into farmers’ operations and give a number of important advantages.” For instance, UAN (urea mixed with ammonium nitrate) can be applied to emerged corn with large-capacity boom sprayers, which cover a lot of ground quickly and accurately without much crop damage.

In their study, McDonald and his colleague Greg Stewart (OMAFRA field crop corn specialist) also wanted to examine how much surface-applied UAN is susceptible to nitrogen loss through ammonia volatilization, compared to a more “protected” soil injection system. They also wished to see how surface applications of N in standing corn might cause leaf burn, which could in turn lead to yield loss. Grain Farmers of Ontario (GFO) provided support for the project, and technical assistance was provided by K. Janovicek, B. Rosser, W. Featherston, and J. Welch at the University of Guelph.

To investigate ammonia and yield loss potential of surface UAN application, the team compared the use of three-hole streamer nozzles (with or without Agrotain urease inhibitor) to UAN applied through injection below the soil surface with an Ag Systems coulter knife injector. There were two trials during the 2013 study seasons, one shortly after planting and another at conventional side-dress timing (V6 stage).

Nitrogen was applied at 100 lb N/ac so that yields would be responsive to N loss. McDonald and Stewart measured ammonia loss by dosimeter tube traps and final yields by weigh wagon. There were four trial locations each year.

Since ammonia volatilization is associated with surface applications of UAN, nozzles that concentrate UAN in a single stream are recommended. In this study, the team compared dribble band, flat fan, and three-hole streamer nozzles, using ammonia dosimeter tube traps on bare soil to measure volatilization. Each nozzle type was also applied with or without Agrotain urease inhibitor, with each treatment replicated four times within each application timing. To investigate the impact of precipitation on ammonia volatilization, one set of dosimeter traps was moved to “fresh” ground within plots following every rainfall while another set was not moved.

There were three locations where yield impact of leaf burn from post-emergent UAN applications was investigated. There were also three treatments including untreated, streamer nozzle applying N over the emerged corn and a directed application that delivered N under the corn canopy to the soil surface.  All application treatments were conducted at the four, eight and 10 leaf stages and replicated three times for each timing at each location.

Yield and ammonia loss were assessed. Some of the yields from corn that received surface applications of UAN were no different than those that received it by soil injection, but some had significantly less yield. “The lower yields came from using streamer only (no Agrotain) at two locations in pre-plant application, and one sidedress location,” Stewart notes. “On the average, there was a yield loss of six bu/ac across all locations and timings with later N applications.” Streamer + Agrotain treatments were only significantly lower-yielding than injection at one side-dress location. Across all locations and application timings, ammonia readings were always highest for the streamer treatments and were followed by slight declines for the streamer + Agrotain treatments.

In the nozzle trials, the team found no clear difference in ammonia loss between application among the three nozzle types (fan, streamer, dribble). “This supports results from previous years, and suggests that using one nozzle over another doesn’t help mitigate ammonia volatilization,” McDonald notes. “However, when Agrotain was included with UAN, ammonia volatilization was consistently reduced across all nozzle types and most dates.”

Applications up to the six leaf stage did not show yield-impacting levels of leaf burn, but those beyond the 10-leaf stage did show yield losses compared to injected side-dress or pre-plant N applications. McDonald says that between the six and 10-leaf stage, application impacts on corn yield are quite variable and thus should be avoided. However, they do offer a wider window with minimal yield loss expectations, should the weather cause an application delay. He says once the corn gets to the  eight leaf stage, farmers should consider using drop pipes, Y drops, high boy injection systems and so on to get good placement of N for availability to the corn crop.

In terms of final recommendations to farmers, McDonald says based on the results of this study, farmers should surface-apply UAN or urea to dry soil, and should remember that precipitation of at least 15-20 mm is needed to incorporate surface-applied N into the soil to stop volatilization losses.

“In addition, consider that applications of N to emerged corn that is not washed into the soil may also cause reduced yields beyond straight leaf burn caused by leaf interception during application,” McDonald notes. “Regardless of the timing of N fertilizer to emerged corn, sufficient rainfall is needed to move the nutrient into the root zone to ensure it is available for plant uptake.”

McDonald says that since the study began, many farmers have been asking questions about N application into standing emerged corn. “Interest is growing, and it’s likely because of a few difficult spring planting seasons,” he explains. “Farmers recognize the importance of planting date on achieving optimal yield potential and are looking for ways to speed up the planting progress and address nutrient application and other management choices after planting.” McDonald and Stewart are writing up the final results of this project, and the complete final report will be available on www.gocorn.net

“We continue to look at this as part of other projects including a significant GFO and industry collaboration on increasing the understanding and  adoption of precision agriculture in Ontario, with management zone development and variable rate applications of nutrients and plant population,” says McDonald. 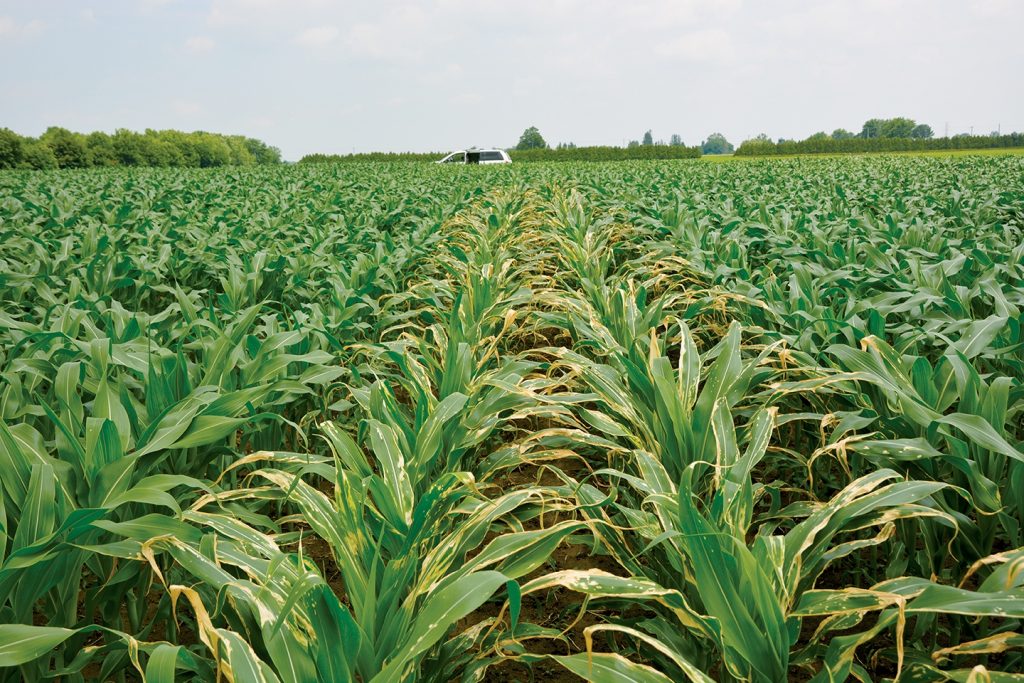 UAN nitrogen corn leaf burn 4-7 days after streamer nozzle application of 30 US gal/ac to 12 leaf stage corn. At this stage of growth UAN applied leaf burn can be severe and symptoms remain visible for a long period of time In Ontario