Monoammonium phosphate (MAP), ammonium polyphosphate (APF) and orthophosphate (OP).  These commonly used inorganic phosphate fertilizers are used to meet nutrient demand for crop growth, but are there differences in soil solubility and plant availability? Not according to research from the University of Manitoba (U of M).

“In the experiment, what we saw was that within a few days, differences in solubility and plant available P became insignificant,” says soil scientist Rigas Karamanos at Calgary who collaborated on the research with Tee Boon Goh with the department of soil science at the U of M, and John Lee with Agvise Laboratories at Northwood, N.D.

Granular phosphate fertilizer dissolves slowly in soil solution and converts to orthophosphate forms, but the latter react quickly in soils to form secondary phosphate compounds with calcium (Ca), iron (Fe) and aluminum (Al), becoming insoluble over time. Liquid P fertilizer formulations that combine sparingly soluble orthophosphates and more soluble phosphates such as P2O74-, were theorized to be more available because they do not require dissolving in soil solution. However, P2O74- must still convert to orthophosphate for plant uptake. To address this theory, the researchers investigated the impact of fertilizer formulation on short-term solubility and plant availability.

Three soils, four fertilizers and one unfertilized control
Three soils of similar texture, organic matter and “available” P level were selected for use in the greenhouse trial. One was acidic and two were alkaline (one non-calcareous and one calcareous).  Four fertilizer formulations were applied; a MAP (11-52-0), an ammonium polyphosphate (10-34-0) and two ammonium orthophosphates (6-24-6 and 9-18-9), at a rate of 100 ppm. All treatments were replicated four times. The fertilizer was physically injected into the soils. The soil water was kept at nearly field capacity throughout the experiment.

Samples were assayed for water soluble (orthophosphate) and “available” P (Olsen method) immediately after application (zero days) and at one, two, four, eight, 16 and 32 days after application.

In alkaline soils, Karamanos explains that the P converted to less soluble Ca and Mg compounds producing the same trends, except that the 9-18-9 maintained higher water soluble P values until day 4 in the non-calcareous soils.

Looking at plant available P using the bicarbonate extractable P method, the trends were the same, with higher plant available P from the liquid fertilizers in the first two to four days, and then non-significant differences after that. Differences in the first few days were widest in the non-calcareous soils and narrower for the slightly acidic soil, reflecting the limitation of the bicarbonate extractable P method in acidic soils.

When phosphate fertilizer is applied at time of seeding, either side-banded or seed-placed, the differences in short term P availability observed by the researchers would not make a difference to P uptake by a crop. Plants would not start to take up P from the soil until well after the two to four day period after planting when the fertilizer formulations differences become insignificant.

Time of emergence after seeding depends on the crop and soil temperatures. Generally, research in Western Canada has shown that even under optimum conditions, the earliest a crop typically emerges is in four days, but for most crops under cool soil conditions, emergence is typically more in the six- to 10-day range.

Additionally, research has shown that P uptake by plant roots does not start until approximately 10 days after seeding. Other research in Western Canada has confirmed that P uptake and accumulation in cereals happens at the tillering to stem elongation stage between approximately 22 and 36 days after seeding. In canola, Karamanos did a study monitoring nutrient uptake in hybrid canola and found that measurable biomass and nutrient accumulation did not start until the third week after seeding. He says the biomass accumulation in the third week averaged one pound per acre per day, and the P uptake was 0.0 to 0.1 pounds P per acre per day.

“What the research is telling us is that the type of phosphate fertilizer formulation applied does not have any impact on long term solubility or plant availability and uptake of P. The soil-P interactions control P uptake and not the formulation of fertilizer applied,” says Karamanos.

Further, Karamanos cautions that no matter the formulation applied, phosphate fertilizer needs to be applied at rates that will ensure the long-term sustainability of P fertility in the soil. Cutting P fertilizer rates because a fertilizer is thought to have better solubility and plant availability will lead to nutrient deficiencies over the long term.

“Soil test using a recognized and calibrated soil test for your area, and apply adequate amounts of phosphate to maintain soil fertility,” he advises. 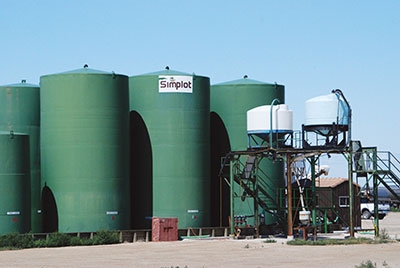 Liquid or granular Do all phosphate fertilizer forms perform the same? Yes