The alfalfa weevil (Hypera postica) is turning into a bigger challenge for some alfalfa growers. Populations of the insect pest in the Rosemary area of Alberta (about 170 kilometres east of Calgary, near Brooks) have been confirmed as resistant to the Group 3A synthetic pyrethroid insecticide Matador. By extension, those populations are likely also resistant to the other pyrethroid insecticide Decis, which is registered for alfalfa weevil control in alfalfa. 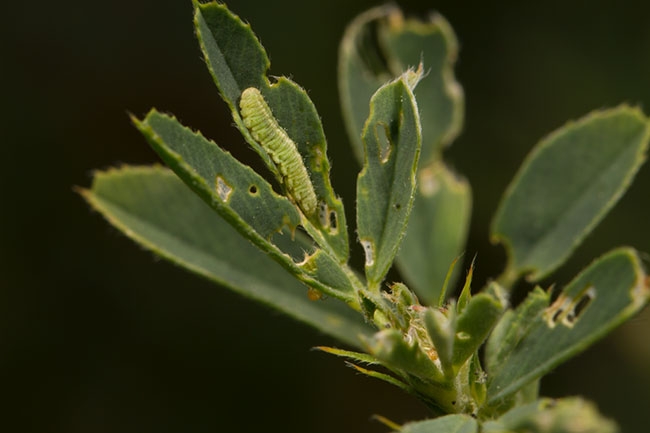 Both adult and larval alfalfa weevils feed on foliage and on opening leaf buds. The alfalfa weevil (Hypera postica) is turning into a bigger challenge for some alfalfa growers.

“Currently these resistant populations are isolated in the Rosemary area but are slowly moving outward,” says Brad Alexander, research and extension manager with the Alberta Alfalfa Seed Commission in Brooks, Alta.

Alfalfa weevil is found in most alfalfa-seed producing areas on the Prairies.

The alfalfa weevil adult overwinters in alfalfa crowns or crop debris in alfalfa fields. The adult is about four to five millimetres long. In the spring, eggs are laid on alfalfa leaves, leaf sheaths, buds and petioles on in surface litter. The eggs hatch and the worm-like larvae go through four instar stages. Peak larval activity is from late June to mid-July. The fourth instar larvae pupate, and new adults appear in a few weeks later in the summer.

Cold winters can help control the overwintering pest. Extended periods of -20 C are required to kill them.

Both adult and larval alfalfa weevils feed on foliage and on opening leaf buds, although the primary damage is from larvae. Feeding can reduce hay tonnage and damage flowers to reduce seed formation. Economic thresholds have been established, varying by growth stage and whether the alfalfa is grown for hay or seed.

Both adult and larval alfalfa weevils feed on foliage and on opening leaf buds.

Control options
In alfalfa grown for hay, scout fields by collecting 30 stems in an M-shaped pattern in the field. Beat stems inside a pail to knock off the larvae and count the larvae. Determine the average height of the alfalfa as well. Economic threshold for insecticide control is reached if larval counts are greater than one larvae per stem, for alfalfa under 30 cm, and two larvae per stem, for alfalfa between 30 and 40 cm. Three larvae per stem is generally economical to control, regardless of the height of the crop.

For hay production, alfalfa growers have the option of taking an early cut of hay to avoid insecticide application. Early cutting is recommended when alfalfa has reached 50 per cent budding and alfalfa weevil has reached economic thresholds. If two or more larvae per stem reappear in regrowth after cutting, insecticide may be necessary if a second cut is anticipated.

In alfalfa grown for seed, scout to assess the damage to leaf tips, and conduct sweep net sampling. The economic threshold is 20 to 30 third to fourth instar larvae per sweep, or 35 to 50 per cent of the leaf tips showing damage.

“The pyrethroids were popular because they were effective. The problem with the organophosphates is that the air temperature during application needs to be warm for them to work well,” Alexander says. “The organophosphates worked well in 2017 because it was so warm but that doesn’t always happen.”

Another benefit of only spraying when economic thresholds are reached is that beneficial parasitoids are encouraged. Several parasitic wasp species, including Anaphes luna, Bathyplectes anurus, B. curculionis and Oomyzus incertus have been introduced in the United States to control alfalfa weevil. A study in Montana found an average parasitism rate by B. curculionis of 37.2 per cent in the North Dakota/Montana border region.

Cárcamo says some of these wasps are also found on the Prairies. However, he says B. curculionis is more effective at controlling alfalfa weevil populations in eastern North America than in the west.

“Research by Julie Soroka at Saskatoon (AAFC) found parasitism, but not at high levels. Maybe the wasp is not the same species as is found in the east,” Cárcamo says.