Triticale is a human-made crop developed by crossing spring rye and spring or durum wheat. Triticale has the potential to be an attractive crop for use as a feed grain, cereal silage or a biofuel feedstock due to greater grain yield potential, weed competitiveness and tolerance to drought and pests.

A research study was conducted in Alberta to determine optimum dryland agronomic practices for triticale (seeding rate, seeding date and nitrogen fertilizer requirements) for grain and starch productivity when grown in the various agro-ecological regions of Alberta. Research trials were conducted at seven locations each year for three years across Alberta for a total of 21 site-years of data. The locations ranged from Bow Island (Brown soil), Lethbridge (Dark Brown soil), High River (Thin Black soil), Vegreville (Thin Black soil), St. Albert (Black soil), Barrhead (Gray soil) to Falher (Gray soil). All locations were no-till, continuously cropped, except Bow Island which was summerfallowed every third year. Two experiments were conducted at each location, which looked at seeding date and rate, and nitrogen fertilizer rates.

Growing season precipitation during the three years of this study was average or above average at most site-years in southern Alberta, but less than average at most site-years in other regions. Total growing degree days (GDD), a measure of heat accumulation, over each growing season was below average at site-years in the Brown soil zone, but average or above average at central and northern sites. The Brown soil zone conditions that are typically drier and warmer than other soil zones were not present during the years this study was conducted. Variation from typical environmental conditions makes data interpretation a challenge. However, this study encompassed a wider range of growing conditions than previous studies because it was conducted for three years over a wide geographic region of the western Prairies.

Seeding date and rate trial
Seeding date and seeding rate effect on grain yield and starch yield was determined for the spring triticale variety AC Ultima. The first seeding date was usually during the first week of May, and the second and third dates were, on average, 12 and 23 days later, but seeding times varied due to soil and weather conditions. At each seeding date, triticale was seeded at 100, 200, 300, 400 and 500 viable seeds/m2 (9, 19, 28, 37 and 47 viable seeds/ft2).

The yield loss per day from delayed seeded at each site-year was positively related to cumulative GDDs in May and June. This result indicated that yield losses due to delayed seeding increased with warmer spring temperatures.

The inconsistent and modest effect of seeding date on yield in this study was similar to that reported by other researchers, who found that a two-week delay in seeding did not consistently affect the grain yield of seven triticale cultivars in a two-year study conducted at three Alberta locations (Collier et al. 2013). Temperatures were generally cooler during the Collier study as well as in this study. Average grain yield was 10 per cent greater at 500 seeds/m2 than at 100 seeds/m2, but based on the relationship between grain yield and seeding rate within each site-year, the maximum benefit from higher seeding rates ranged from minus seven to plus 30 bu/ac. Site-years with less than 125 mm of precipitation did not derive a yield benefit from higher seeding rates, while site-years with more than 200 mm of precipitation consistently benefited from higher seeding rates.

The seeding rate at maximum yield at site-years with a significant effect of seeding rate ranged from 350 to 480 seeds/m2. Higher seeding rates may provide benefits other than yield, such as improved weed competitive ability and earlier crop maturity. General suggested seeding rate recommendations are provided in Table 1.

Soil test nitrate-N was not closely related to triticale yield increase with added N fertilizer, due to appreciable soil N mineralization at low levels of soil nitrate-N and to variable N losses. Based on the results from this study, N fertilizer rates for triticale should be based primarily on the range of expected growing season precipitation for a given location. 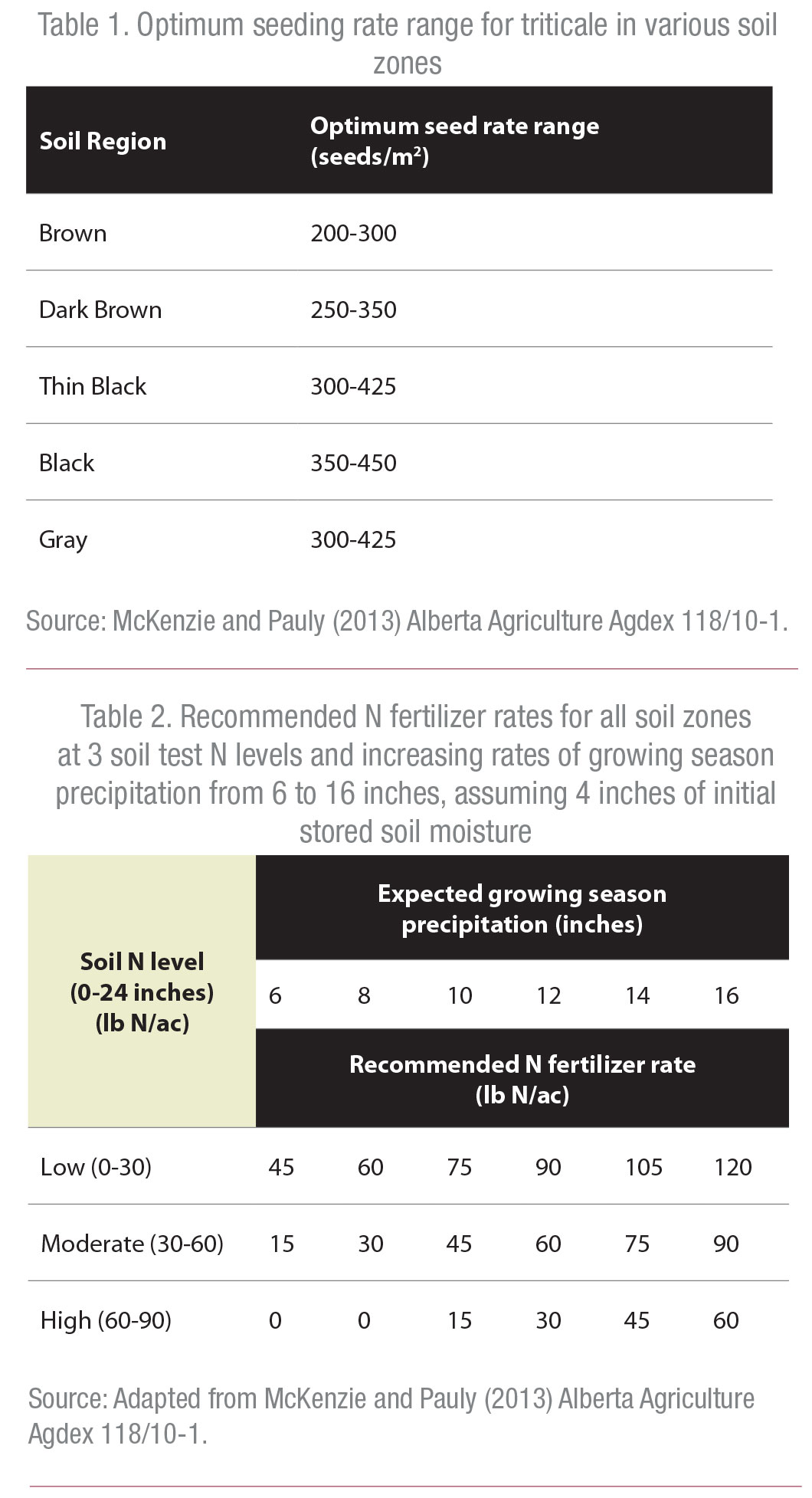 The results indicated that N fertilizer rates for triticale should be mainly based on the range of expected growing season precipitation as optimum N fertilizer rate did not correlate well with preseeding extractable soil NO3-N. Increasing rates of N fertilization increased kernel weight and protein concentration and slightly decreased starch concentration. 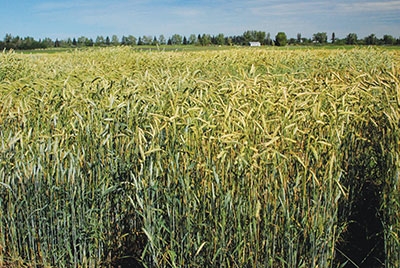 Agronomic recommendations for spring triticale vary by location and year. Triticale has the potential to be an attractive crop for use as a feed grain