Prairie farmers seeded over four million acres to pea in 2016. In 1975, peas were grown on about 10,000 acres. Peas have become a very important crop over the last 40 years, and Canada has become the world’s largest exporter of both yellow and green pea. As western Canadian pea acreage has grown, so has the demand for information on agronomy and nutrient management to achieve optimum production. 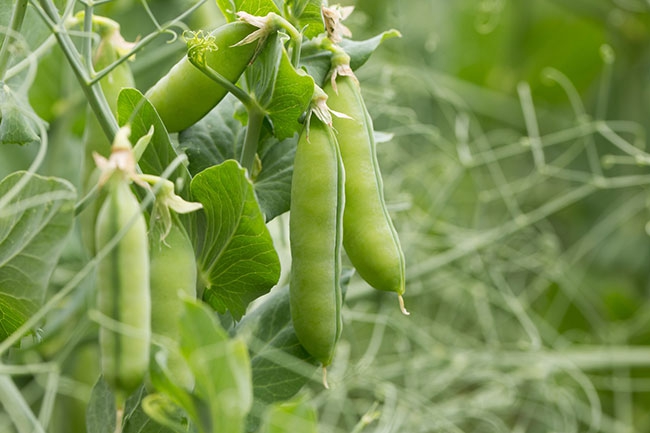 Pea is an efficient nitrogen-fixing crop. Pea residue will release significant nitrogen (N) the following year, benefiting the next crop. Growing spring or durum wheat after pea can significantly benefit grain protein the following year. Recent research in Western Canada has shown malt barley yield and quality are very good when barley is grown after pea with half the normal rate of nitrogen fertilizer.

Pea cultivars
Significant market types include green, yellow, maple, dun and forage pea. A few farmers in southern Alberta are now growing winter pea. Check your provincial department of agriculture for the list of pea cultivars and how each is rated for yield, vein length, standability, disease tolerance (e.g. powdery mildew, Fusarium wilt, Ascochyta blight, etc.) maturity, thousand seed weight, and other factors such as seed coat breakage and bleaching tolerance. Review how each variety performs in your region and consider which agronomic characteristics are most important in the region you farm. Newer pea cultivars developed for Prairie conditions have better agronomic characteristics and yield potential than previously available cultivars. Most varieties are semi-leafless with shorter vine length and upright growth habit, which increase the ease of harvest.

Seeding depth, rate and date
Ideally, pea should be seeded between 1.5 and 2.5 inches deep into a moist seedbed. Pea should be seeded at a rate of seven to nine seeds per square foot (seeds/ft2). Thousand seed weight is quite variable among pea varieties; always use seeding rate and thousand seed weight to determine the seeding rate in pounds per acre.

For most Prairie farmers, field pea should be one of the first crops seeded in the spring. Early seeding often results in higher yield and better quality. Pea is quite tolerant to late spring frost: In the event of a very heavy frost, pea will almost always regrow successfully from below ground nodes.

Pea is very sensitive to heat when flowering. Extended high temperature in excess of 25 C to 30 C may cause pea flowering to terminate and yield to decline. Seeding peas early can result in flowering before the arrival of hot summer temperatures, which in turn can help achieve optimum yield.

Seed quality and treatment
Be sure to use good quality seed. Testing seed to determine the presence of seed-borne disease is important. The use of a registered fungicide seed treatment is important, particularly when seeding early into wet, cool soils. If wireworm or pea leaf weevil are concerns in your area, seed treatment is recommended for control.

Nitrogen fertilizer and inoculant response
Pea field research in Alberta has shown that rhizobia inoculation increased pea seed yield in more than 40 per cent of trials by an average of 14 per cent. In rhizobia inoculated treatments on land with no history of peas, the yield increase with inoculation was 19 per cent. Given the uncertainty of naturally occurring levels of rhizobia in soil and the responsiveness of the many pea cultivars available to growers, rhizobia inoculation is strongly recommended. Rhizobia inoculation represents a cost-effective means of ensuring maximum pea yields. However, the frequency and magnitude of inoculation benefits are likely to be less than 50 per cent, especially in fields that have regularly grown a pea crop.

In the Alberta study, approximately 80 per cent of N in the pea plants came from N fixation. Generally, it took rhizobia bacteria three to five weeks to inflect pea roots and start to fix N, depending on environmental conditions.

Pea benefited little from starter N fertilizer; normally N fertilizer is not recommended for pea. The Alberta research did show that on Brown and Dark Brown soils, a small amount of fertilizer N was beneficial when soil test N was less than 15 pounds per acre (lb/ac) in the top 12 inches of soil. No benefits were observed on Thin Black, Black or Gray soils.

Phosphorus fertilizer
Research in Alberta showed applying phosphate fertilizer significantly increased pea seed yield at 37 per cent of sites with an average increase of seven per cent. The average yield benefit was greater in the Thin Black, Black and Gray Wooded soil zones versus Brown and Dark Brown soil zones. More than half of the research sites responded to phosphorus (P) fertilizer when soil test P was less than 30 lb P/ac in the zero- to six-inch depth, using the modified Kelowna method. This would be about 15 lb P/ac using the Olson method. Results showed only six per cent of trials with soil test P levels greater than 30 lb P/ac (modified Kelowna method) had a significant yield increase. Generally, peas are only responsive to P fertilizer when soil test levels are low to very low. Application of 25 to 30 lbs of phosphorus pentoxide (P2O5) per acre was usually enough to achieve optimum yield. Phosphate fertilizer should be either side-banded or seed placed. Seed placement should not exceed 25 to 30 lb P2O5/ac to avoid significant seed germination injury.

Potassium and sulphur fertilizer
The Alberta results rarely showed yield benefits from adding potassium (K) and sulphur (S) fertilizer. These fertilizers should be applied based on soil test level and yield potential.

Pea takes up relatively large amounts of K. However, only 20 per cent of the K is contained in pea seed, while the remaining K, contained in the leaves and stems, is returned to the soil. Many Prairie soils have K levels in the range of 400 to more than 1,000 lb/ac. Generally, K fertilizer is ineffective in increasing pea yield when soil test K levels are more than 250 to 300 lb/ac. Potassium fertilizer is recommended on fields that test less than 250 lb/ac, or on sandy soils or intensively cropped fields.

Potassium fertilizer should be side-banded and not seed-placed. Even small amounts of seed-placed K with pea may reduce germination and emergence. If potassium is required, banding is the better placement method. Table 1 gives generalized K fertilizer recommendations for pea grown on various Prairie soil types.

Soil sulphate-sulphur (SO4-S) levels are generally adequate in the Brown and Dark Brown soil zones; however, some soil types are occasionally low in sulphur. Much of the sulphur in the topsoil is contained in the soil organic matter and is slowly released as sulphate-S – the form a pea crop takes up. Thin Black, Black and Gray soils are more frequently low in sulphur. Irrigation water usually contains substantial amounts of sulphate-S. Typically, 12 inches of irrigation water will add approximately 30 lb/ac of sulphate-S to the soil in southern Alberta. Therefore, pea crops usually do not require S when grown on irrigated land.

Sulphate-S can be highly variable across fields. When a field is uniformly low in S, a soil test is very useful to estimate S fertilizer needs. However, if 10 to 20 per cent of a field is low in S, it can be difficult to identify low S areas without intensive soil sampling.