Small planes have been flying over local farms and taking aerial photos for decades. Now, individual farmers are able to get an aerial view of a field using a small remote-controlled drone equipped with a camera.

But Agriculture and Agri-Food Canada (AAFC) has been receiving information from a far more sophisticated data collection network for at least the past 30 years, according to Leander Campbell.

Campbell, a geographer who specializes in geomatics, works as a remote sensing specialist with the Earth Observation team at AAFC. He says most of his work is on the AAFC Annual Space-Based Crop Inventory. He gets his data in the form of imagery from satellites and uses it to produce an accurate national crop map.

“The crop map, the one I work on, is at a 30 metre resolution so each pixel is a 30 metre by 30 metre square. It covers all of Canada,” he explains. Campbell adds one of the crops mapped in year one of the crop inventory in 2009 was soybeans. Since then, the data has shown how the crop is spreading west and north on the Prairies. 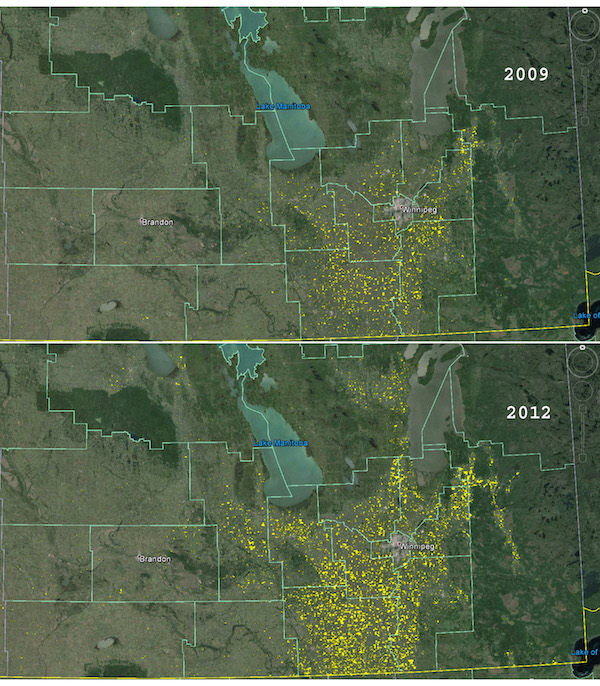 Campbell extracted only the soybean fields (in yellow) from Manitoba crop maps for the years 2009 and 2012.
Photo courtesy of Leander Campbell, AAFC.

The network Campbell gets his data from consists of several international satellites. The American satellite Landsat-8 provides optical data to create crop maps anyone can download. In addition to these data, Campbell’s team also uses microwave data from the Canadian RADARSAT-2 satellite.

The combination of optical and microwave data has been shown to produce more accurate maps than maps created from either single source. These maps are created and validated using data collected by people in the field. For the Prairies, “we have agreements with the provincial crop insurance companies,” Campbell says. “It’s not a perfect system but we’re about 85 per cent and 90 per cent accurate and working to improve that.”

Satellites don’t stay in orbit forever and Campbell says a backup is always an asset. Canada has plans to launch a constellation of three microwave satellites in 2018, the RADARSAT Constellation Mission (RCM), to gather data that’s even more detailed and precise than what’s available now.

“There are more uses than I ever thought of,” Campbell says. For instance, crop placements, crop monitoring, research, commodity marketing, land use management and even flood forecasting in Manitoba.

Microwave data collected by the European SMOS (Soil Moisture and Ocean Salinity) satellite allows Campbell’s team to operationally measure soil moisture in the top five centimetres of soil. He says most people don’t realize the Earth naturally radiates very low-level microwave energy and a satellite in space can pick up the variations in waves. Water absorbs microwave energy. When the microwaves radiate out from the Earth and pass through the soil, some of them are captured by moisture in the soil.

According to Campbell, in September 2015, Statistics Canada did not do a farmer survey, opting to use AAFC climate data to complete their crop yield forecast. Satellite data can describe how agriculture land is changing or evolving over the years, whether it’s farmland expanding by eliminating small woodlots or urban expansion covering agricultural land. These phenomena can be monitored year over year using the AAFC crop maps.

Campbell has compiled maps that helped document the areas where clubroot is developing in canola. Scott Keller, a farmer from Camrose County in Alberta, contacted AAFC, asking Campbell if he could map Camrose County to determine how often canola was grown in particular fields. Keller wanted to determine which fields grew canola most often, either in a tight rotation over multiple years or in succession, in order to determine if there was a correlation between the escalation of clubroot and the rotation schedule. 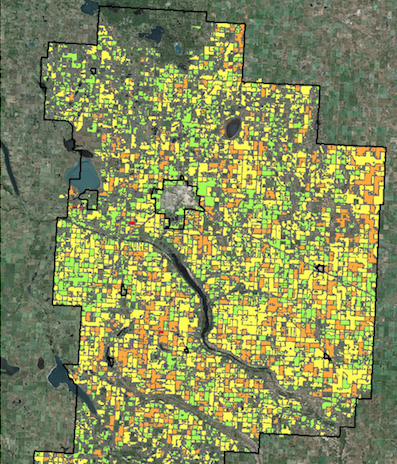 That’s just one way satellite data can support crop management. Campbell says he’s confident that as computer technology and Internet costs come down, AAFC will be able to create more products from data because they can monitor specific areas once or several times over a growing season, or over years.

Campbell and his six colleagues who create the crop maps, soil moisture reports and the normalized difference vegetation index (NDVI) reports have an international presence as well. “I know some of our maps are incorporated into more global crop assessments for global market information, especially the NDVI maps,” Campbell says.

He explains that several nations around the world use satellite imagery to monitor their own crops. They meet on a monthly basis and compare data on major crops like corn, wheat, rice and soybeans through an organization called GEOGLAM. The group’s website states its vision is to “use coordinated, comprehensive and sustained Earth observations to inform decisions and actions in agriculture through a system of agricultural monitoring.” https://cropmonitor.org

Canadian farmers can access existing maps and data products online from the AAFC website. Because these maps are highly detailed, producers may experience difficulty downloading them on devices while in the field, but they can still view them online. According to Campbell, that’s the sort feedback he needs to hear from farmers.

“In our little world we have all these high-end computers and that works fine for us, but it may not be the most practical thing for others,” Campbell says. And, he’s looking forward to finding more ways to help farmers and make the website more user-friendly.

As satellite mapping matures, both farmers and scientists will view agriculture in new ways and Campbell is enthusiastic about the possibilities. “It’s a really exciting time to be in our field,” Campbell says.