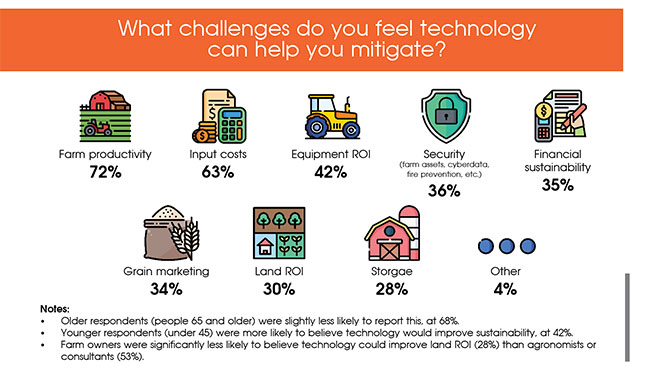 Notes: • Older respondents (people 65 and older) were slightly less likely to report this, at 68%. • Younger respondents (under 45) were more likely to believe technology would improve sustainability, at 42%. • Farm owners were significantly less likely to believe technology could improve land ROI (28%) than agronomists or consultants (53%). ICONS courtesy of FzLATICON.

“Farmers are farmers for a reason,” says Kerry Wright, CEO of the Canadian Agri-Food Automation and Intelligence Network (CAAIN). “They are very entrepreneurial, but I think they’re learning that they like to have a life too.”

Wright says the right technology, when layered correctly, can enable farmers to get back to more of what matters. And although survey respondents reported a number of barriers to adoption and uptake, the survey results indicated that they, too, are keenly aware of the positive benefits of precision ag technology.

Alain Goubau, CEO of Combyne Ag, says in his experience, Internet of Things (IOT) devices and systems have provided better performance throughout the farm operations. “We’re much better at managing fertility and diseases through some of the things you can measure through IOT devices,” he says, adding to echo Wright’s point, “The time you get back and how you use it is something technology can bring when you get comfortable with it.”

Some respondents also reported that security including farm assets, cyberdata and issues such as fire prevention could be improved with new technology, with 36 per cent reporting this. And 35 per cent of respondents believed that technology would help their farms achieve more financial sustainability – however, younger respondents (under 45) were more likely to believe technology would improve this, with 42 per cent selecting this.

Just over one-third (34 per cent) of respondents believed technology would help them improve grain marketing. And while 30 per cent of respondents reported that technology could provide farms with better ROI on their land, there was a significant split between groups on this answer. Farm owners were significantly less likely to believe technology could improve land ROI (28 per cent) than agronomists or consultants (53 per cent).

Additionally, 28 per cent selected storage as an area that could be positively impacted by technology, and four per cent of respondents selected “other.”

Connected farms with better access to their own data can use that data for better proof-of-concept, adds Darcy Herauf, director, FCC Ag Expert. “I think we have to be able to tell our own story better, and I think data is going to underpin a lot of that.”