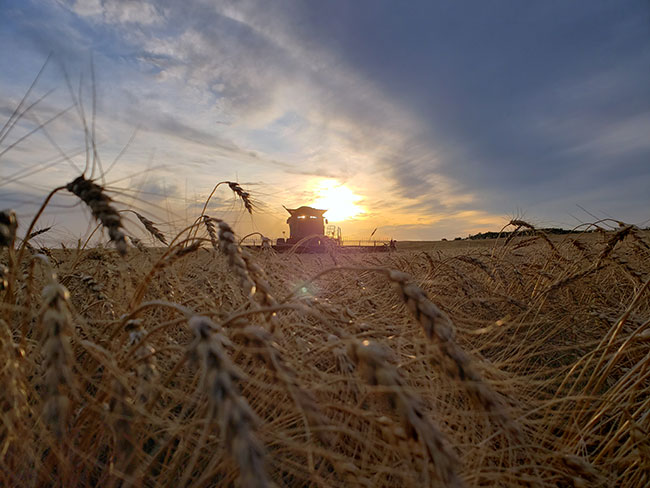 Winter wheat is an important crop in some areas; however, overwinter survival – particularly under low snowfall conditions – can be challenging in some years. Winter hardiness is a complex trait that is heavily influenced by several environmental factors, such as the presence of snow cover, soil fertility, soil heaving or ice encasement, as well as biotic factors like disease pressure or insect damage.

Researchers continue to work on advancing cold hardiness of winter wheat and rye and improving traits associated with greater winter survival and injury avoidance. This work builds on previous studies conducted by C. Robert Olien from Michigan State University, Brian Fowler and Larry Gusta from the University of Saskatchewan, David Livingston from the United States Department of Agriculture’s Agricultural Research Service and Bryan McKersie from the University of Guelph.

“Although it is well known that the crown of winter wheat is critical to overwinter survival, until recently little was known about the specific areas of the vegetative crown or different tissues that were important,” says Karen Tanino, professor in the University of Saskatchewan’s Department of Plant Sciences. “The crown was really a black box, and we are trying to break down the black box to better understand what the key critical tissues are that enable winter survival and avoidance of injury.

“We are developing a complete model of freezing behaviour in the critical crown organ to identify meaningful improvements in winter cereal cold hardiness,” she says. “We wanted to study the mechanisms of the parts of the winter wheat crown that were being injured or killed over winter. Once the mechanism of survival has been identified, breeders can then select for this trait.”

Tanino first studied winter wheat as part of her master’s thesis in the mid-80s, looking at eastern Canadian varieties and mechanisms of cold hardiness at the University of Guelph. Limited new research has been published in this specific area since then, leading Tanino and her PhD student Ian Willick to initiate a new project in 2013 focused on improving cold hardiness of western Canadian varieties of winter wheat. Norstar winter wheat and Puma and Hazlet winter rye were selected for the investigation of cold-acclimation and freezing behaviour responses in the crown. This project is funded as part of a larger program led by Brian Fowler at the University of Saskatchewan.

“The vegetative crown of winter cereals, which is a modified stem, is the key organ that survives the winter,” Tanino explains. “The leaves and roots eventually die over winter, but if the crown is alive then the plant can regenerate new roots and shoots in the spring. The vegetative crown organ is divided into two major constituents: the shoot apical meristem (SAM) and the vascular transition zone (VTZ). The shoot apical meristem includes the apical meristem tissues as well as newly formed leaves. The vascular transition zone, which is located between the SAM and the base of the crown, is a complex tissue comprised of root meristem cells, pith and xylem responsible for the translocation of water from the roots to the above-ground organs. The leaf sheath, which is associated with the mature leaf aerial organs, encapsulates the crown.

“However, due to the complex nature of the vegetative crown, the critical organ for survival, not all these constituents achieve the same level of hardiness,” Tanino says. “The ability of the plant crown to withstand prolonged exposure to low temperatures can also substantially vary between winter cereals and different genotypes, with winter rye the most cold-hardy, followed by winter wheat, winter barley and oat.”

Further lab studies were conducted on the winter wheat and rye crowns to determine the tissue-specific differences in freezing survival. The tissues were subjected to controlled freeze testing and cold acclimation, and then sampled and tested for recovery. Tetrazolium chloride (TTC) vital staining was used to compare freezing survival on tissue samples, and is also a common method used for testing seed viability for germination. The TTC essentially assesses respiration of living tissues: the sample will turn a red colour for live cells/tissue, while the off-white and yellow tissue colour indicates injured or dead cells/tissue as a result of freezing.

The results confirmed that the lower region of the crown, or the VTZ, is the area where injury first occurs. However, the results also showed that the VTZ is not the most important tissue in the crown; rather, it is the apical meristem, or SAM. If the VTZ was injured, the injury was not lethal and the crown could recover; however, if the SAM was damaged, that was the final blow to the plant. This is in contrast to earlier findings on eastern Canadian varieties, where the VTZ appears to be the most important tissue in the crown.

Several approaches were used in lab trials to further identify how the freezing process results in injury to plants, including differential thermal analysis, ice nucleation, and spatial localization studies using the Canadian Light Source in Saskatoon. The objective was to understand how the plant managed freezing and ice propagation, including where freezing starts in the plant, how fast it develops and what the barriers are that may help the crown avoid or tolerate freezing.

“The results confirmed there is a differential pattern of freezing in winter wheat and rye, and it is the leaves that are the initial source of freezing in the fall,” Tanino says. “The ice then rapidly travels down the leaves into the crown. However, the crown has developed various barriers, including one shown by others to be located below the apical meristem, presumably preventing ice from reaching the apical meristem and preventing injury. 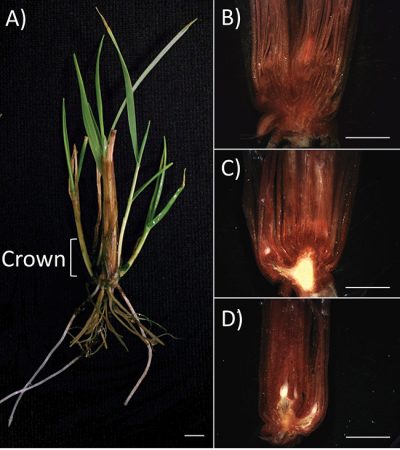 “Although this differential pattern of freezing injury has long been reported in other complex structures, such as overwintering tree bud organs, this is the first study that has proposed that cold-acclimated crowns of winter cereals utilize a similar strategy of translocating and segregating ice into freezing-tolerant tissues and organs to avoid lethal injury.”

Tanino adds that in reviewing how overwintering tree buds manage water flow, freezing and thawing, it is the outer bud scales that are the first to freeze. A barrier between the scales and the bud tissue allows water to flow out of the bud to the scales, but prevents larger ice crystals from moving back into the bud. The apical meristem in the bud basically dehydrates, preventing freezing.

“As temperatures fall, the tree buds or crowns begin to reduce free water,” Tanino explains. “There is not a single process but rather a sequence of events that will vary depending on the tissue, degree of acclimation, temperature of initial ice nucleation, rate of ice growth, and physical and chemical factors that affect water activity and migration.”

In this study, three distinct freezing events were identified that correspond to the risk of injury to different parts of the crown. A high-temperature event at -3 C to -5 C corresponded with ice formation and high ice-nucleating activity in the leaf sheath encapsulating the crown. The leaf sheath appears to act as an ice sink by accommodating ice from the VTZ and SAM water vapour. A mid-temperature event at -6 C and -8 C corresponded with cavity ice formation in the VTZ, but an absence of ice in the SAM. A low-temperature freezing event, similar to buds, corresponded with SAM freezing injury and also corresponded with the killing temperature in winter wheat at -21 C and rye at -27 C. The findings show that cold-acclimated winter wheat and rye crowns likely survive freezing using an ice segregation freezing strategy, and rye is better able to survive due to higher SAM freezing avoidance.

“A proteomic analysis was also performed to understand tissue-specific differences in cold acclimation and freezing survival,” Tanino adds. “This component of the study was conducted in Japan at Iwate University. The results of the analysis indicate that the SAM and VTZ express two distinct tissue-specific barrier responses during cold acclimation, and show differences in how proteins are regulated in the crown and specifically in the cell walls.

“The analysis identified that dehydrins, vernalization-responsive proteins, and cold shock proteins preferentially accumulated in the SAM,” Tanino says. “In contrast, modifications to the VTZ centred on increases in pathogenesis-related proteins, anti-freeze proteins and sugar-hydrolyzing enzymes. These findings suggest that there may be some commonalities or overlap with other abiotic or biotic stress resistance such as diseases. For example, those plants that are more cold-hardy are known to be more disease-resistant, but the mechanism is not yet known.”

“The results from this project have provided a better understanding of cold hardiness in winter wheat and rye and the mechanisms for winter survival. This new knowledge helps inform and expand my program, which is focused on finding strategies to enable plants to overcome a range of abiotic and biotic stresses,” Tanino says. “In the field, crops have to survive everything, and we never know from one year to the next what will be more important: cold or drought tolerance, diseases, insect pests or other stresses. And ultimately, the results of the project have provided additional targets and tools for plant breeders in advancing cold hardiness in winter wheat and rye.”