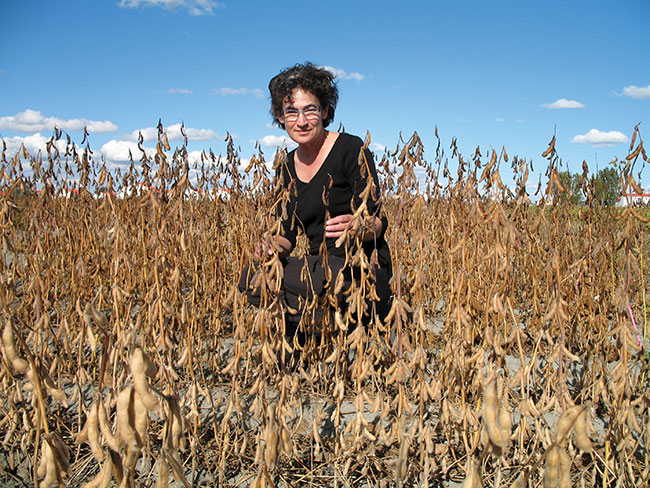 Growers in eastern and northern Quebec, northern Ontario, the Prairies and the Maritimes are interested in growing soybean. As a higher-value crop that fixes nitrogen, it is a good option for diversifying their rotations. But these growers need very early maturity varieties adapted to their own growing conditions. That’s where researchers like Louise O’Donoughue come in.

O’Donoughue is a research scientist with CÉROM (Centre de recherche sur les grains) in Quebec. She has been focusing on development of early soybeans for about a decade.

“Initially, my interest was to expand soybean production into parts of Quebec with shorter growing seasons like Saguenay-Lac-Saint-Jean. I also knew that interest in earlier maturing soybeans was increasing out West and in other short-season areas,” she explains.

“And the timing was good for addressing this issue because when I was starting this work, four maturity genes had been identified in soybean. So I knew that I could look at the status of these four earliness (E) genes in the breeding material, characterize the material and develop markers. As well, the soybean genome had been completely sequenced [providing a strong foundation for in-depth work on soybean traits].”

O’Donoughue’s work on early maturity soybeans has been funded through programs like Growing Forward, Growing Forward 2, the Canadian Agricultural Partnership and Genome Canada (SoyaGen). Her research so far has helped to create a springboard for further breeding advances and has resulted in the development of many advanced lines in the soybean maturity groups (MG) 00 and 000 for short-season regions.

Getting a better handle on earliness
A key objective of one of her recent projects was to find out more about the early maturity sources in the soybean gene pool.

“Canada was a pioneer in developing early maturity soybeans, but I thought perhaps we hadn’t exploited all the different ways of getting early maturity that were available in the gene pool. Back in 2013 when this project started, we didn’t know what was in the Canadian soybean gene pool. So, we wanted to see what maturity genes we had been using in our germplasm,” she says.

To start the work of characterizing the early maturity genes in the Canadian gene pool, O’Donoughue teamed up with two other soybean breeders: Elroy Cober with Agriculture and Agri-Food Canada (AAFC) in Ottawa, and Istvan Rajcan at the University of Guelph.

“We put together a collection of lines that we thought represented the Canadian soybean gene pool at the time,” she says. “And we characterized them for allelic status at those four E genes, E1 to E4.” In other words, the researchers determined all the different variants, or ‘alleles’, of these four earliness genes that are present in the different lines.

They also characterized a set of about 100 early lines from all over the world. “We also wanted to look at other sources of early maturity in soybeans from various areas in the world to see whether we could introduce more diversity in Canadian breeding of early maturity and to see what maturity genes were in those exotic lines.”

For instance, the researchers grew the set of exotic lines at eight sites to see how the different lines with their various combinations of E genes and alleles would perform in different environments. The field trials took place at two sites in Saskatchewan, two in Manitoba, two in Ontario and two in Quebec.

These exotic lines ranged from MG 1 to MG 000. O’Donoughue explains, “At that time, we didn’t really know how those different maturities would behave in environments like Manitoba.”

Some highlights of accomplishments
This project’s characterization work has produced important outcomes. In particular, it has provided Canadian soybean breeders with a much better picture of the early maturity genetic resources available in the Canadian and exotic gene pools.

O’Donoughue and her research group also made several valuable discoveries through this work. She says, “We discovered some alleles for these E genes that were previously unknown. And we also found other alleles in the exotic material that had not been utilized at all or were very underutilized in the Canadian gene pool, alleles that could be used to produce early maturity lines for Canada.”

In this same project, her group also developed more than 100 new breeding populations using the new exotic sources for early maturity. These new populations are a great source for those unused and underused earliness alleles.

“Another very important achievement is that we have developed at least 16 markers for various genes to select for early maturity, and we are using these markers in our breeding program,” she notes. “Developing markers for maturity may sound silly because you can select for maturity by growing the material in the field. But selecting for maturity in the field means that you have to wait until the plants are mature to see what their maturity is. With the markers, we can predict beforehand which ones have the most potential for early maturity.” 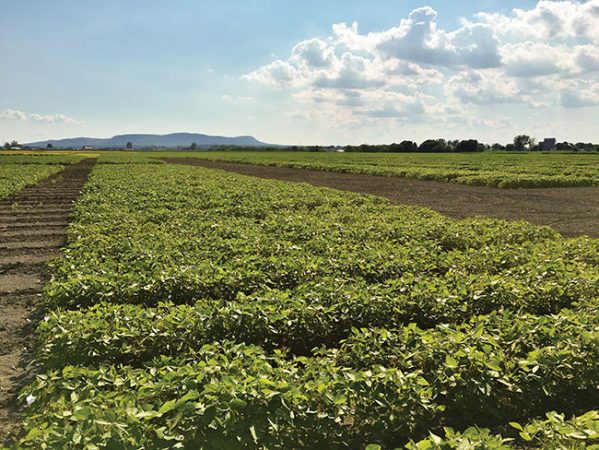 O’Donoughue is breeding soybean lines in the 00 and 000 maturity groups. Photo courtesy of SoyaGen.

Poised for further advances
“As a result of this research, we have about 10 early maturity lines that have potential for registration. We’re in the process of trying to commercialize them,” O’Donoughue says. Most of these advanced lines are rated as MG 00. So far only one is a MG 000, but O’Donoughue says more MG 000 lines are coming along in the breeding pipeline.

In one of her current early maturity projects, O’Donoughue is collaborating with AAFC’s Cober and Tom Warkentin at the University of Saskatchewan’s Crop Development Centre. They are targeting development of food-type soybeans for MG 00 and MG 000 areas.

Warkentin’s soybean breeding program is fairly new, so O’Donoughue and Cober are sharing some of their breeding materials with him for screening in his MG 000 environments.

And all three breeders are collaborating on testing their lines at locations in Saskatchewan, Manitoba, Ontario and Quebec.

O’Donoughue is also working to improve other traits in early maturity soybeans. For instance, she is developing lines with resistance to soybean cyst nematode (SCN) and Phytophthora root rot.

“Soybean cyst nematode is the most damaging pest of soybean in the world,” O’Donoughue notes. This soil-dwelling pest has been spreading across North America since it was first detected in North Carolina in 1954. In Canada, SCN was first found in southwestern Ontario in 1987. By 2013, the nematode had arrived in western Quebec. And in 2019, it was confirmed in southern Manitoba near the U.S. border.

Resistant varieties are key to SCN management, so SCN resistance is an important objective for O’Donoughue’s breeding program.

However, she notes, “Overall, about 98 per cent of SCN-resistant lines use a single source of resistance. This resistance source is now breaking down in the U.S. Also, a lot of the breeding materials with SCN resistance are later-maturing lines [so the resistance genes would need to be brought into earlier-maturing material for her breeding program].”

O’Donoughue and her collaborators at AAFC, Benjamin Mimee and Tom Welacky, obtained 12 alternate sources of SCN resistance from soybean genebanks. They have tested those sources and confirmed that they are resistant to very damaging SCN populations in Ontario.

O’Donoughue adds, “Some of these resistance sources are in soybean lines that are as late as MG 2. So if I make a cross and develop a population, I can use my maturity markers to remove anything that is beyond the maturities that I’m targeting.”

“Phytophthora sojae is an important pest here in Eastern Canada and I think it’s going to be a problem out West also,” O’Donoughue says.

Benefits for growers and breeders
“The advances from this research – the new knowledge about how maturity is controlled in the Canadian gene pool, the new sources of maturity and the underutilized sources, and the new markers – are already benefitting Canadian soybean breeders. I think that we’re all in a better position to breed for early maturity in Canada because of these projects,” O’Donoughue says.

“For growers, I hope this research will lead to soybean varieties that are better adapted to their various environments because a short-season soybean that performs well in Saskatoon is different from one that does well in Lac Saint-Jean. With the knowledge we have gathered and the tests we’re doing across environments, I’m hoping to be able to provide growers with varieties that have high yield potential in their own environment.”