July 1, 2021
By Tracey Baute, with information from Jocelyn Smith

Exploring the impact of Bt-resistant corn rootworm populations and steps to mitigate risks. 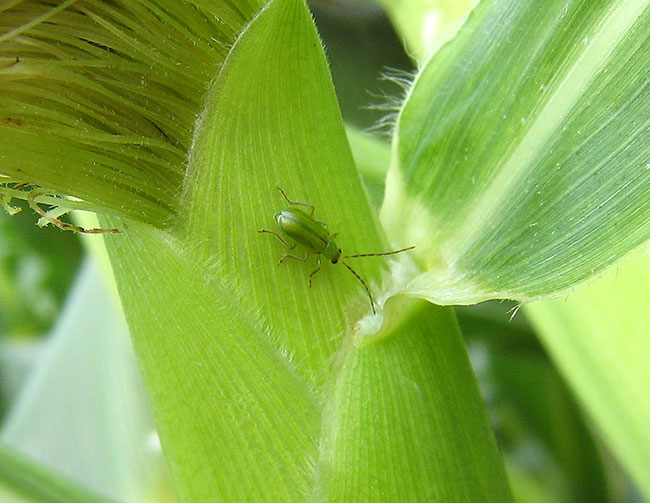 Bt-resistant corn rootworm is having an impact on Ontario corn. Tracey Baute, field crop entomologist with the Ontario Ministry of Agriculture, Food and Rural Affairs, discussed the impacts of Bt-resistant corn rootworm populations, and the necessary steps to take to mitigate the risks at the Top Crop Summit, held virtually on Feb. 23 and 24, 2021.

The western corn rootworm and northern corn rootworm can cause significant damage when larvae feed on corn roots during June and July. Research has found that for each node pruned, yield loss can be 15 to 18 per cent. Silage corn losses can be higher because of lodged plants left behind during harvest.

Bt-rootworm hybrids have become the foundation of corn rootworm management, but when corn is grown in continuous rotations, rootworm populations build up in the field. Within these populations are ones with resistance to a Bt-protein, and these can survive and multiply to overcome Bt-rootworm corn hybrids.

The development of Bt-resistance has been documented in the United States over the last two decades. Single traits were marketed first, and then combined in pyramid hybrids where two different Bt-resistant proteins were placed in one hybrid. Solely relying on pyramid hybrids (repeated use) for rootworm management with rotation of these pyramids as the only resistance strategy resulted in cross resistance to multiple Bt-rootworm proteins, and a breakdown in protection. 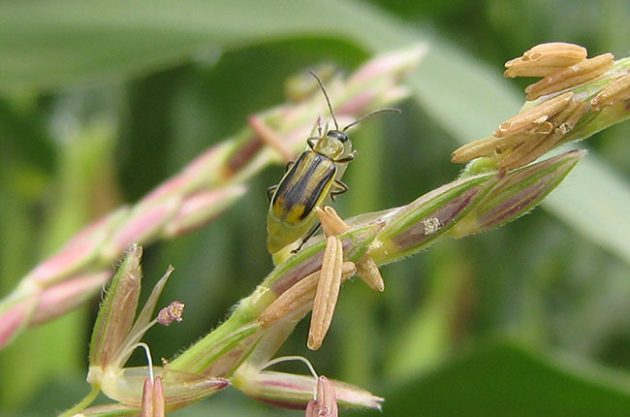 Mitigation in Bt-resistant areas
In areas with Bt-resistance, these resistant corn rootworm populations persist in fields. As a result, rotation out of corn for two years will be the main strategy to knock the populations down to lower, less damaging levels. Growers are strongly discourage from planting corn with a different Bt-rootworm pyramid hybrids in 2021, as pyramids are now largely single trait hybrids at best in these failure areas.

For livestock producers who rely on corn for feed and silage, OMAFRA forage and livestock specialists have worked to find the best non-corn feed and silage options. For silage replacement, this includes double cropping of winter cereal and spring seeded sorghum-sudangrass, while others like Italian or westerwold ryegrass have potential, too. Various cereals can be considered for high moisture corn feed replacement though consultation with livestock nutritionists are advised.

Another option is to grow non-Bt rootworm hybrids; Bt hybrids that only contain above ground Bt proteins for European corn borer or western bean cutworm. Protection against corn rootworm would be achieved with in-furrow application of granular or liquid insecticides. A high-rate neonicotinoid seed treatment could also be used (though require pest assessment reports for use in Ontario) for root protection. 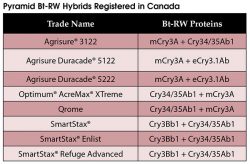 One or both proteins may be compromised. At best, some may have only one working protein (single trait hybrid). No new traits coming!

Biocontrol with nematodes has potential as production labs scale up supply over the next several years. The nematodes have shown success in the U.S., and a few Ontario growers have already used them. The nematodes can persist for more than 10 years after one application, and can help drive Bt-resistant rootworm populations down to enable the use of Bt-rootworm hybrids again.

In the long term, sustainable practices to restore the durability of Bt-rootworm hybrids will require a combination of rotating out of corn once every four years, using Bt-rootworm hybrids only in high risk years, and rotation of all rootworm management tools in the other lower risk years.

As part of a long-term strategy, corn growers are encouraged to scout for signs of resistance, such as high adult beetle activity, and goosenecking and lodging of corn plants. If growers think they have a failure, they should notify their seed supplier and provincial entomologist.

Contact Tracey Baute or Jocelyn Smith if you are interested in learning more about the biocontrol nematodes.