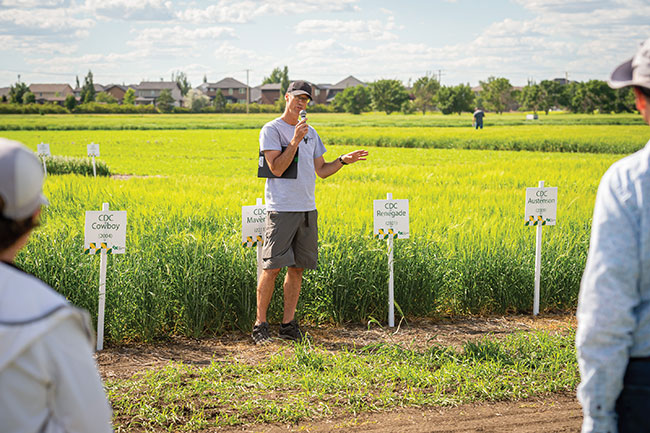 The malting barley and brewing industry is an economic driver in Canada. But it didn’t get there overnight. It took the dedication of plant breeders, their colleagues and farmers to continually move the industry forward. With a focus on not only yield and agronomics, but also specific malting traits demanded by brewers, plant breeding takes novel approaches to improve profitability from farm to glass.

“Collectively, the malt barley industry has a large impact on the Canadian economy with about $3.5 billion dollars of economic value going directly to the malt and grain companies, and the farmers who grow it. But there is quite a large additional benefit to the economy primarily through taxation on beer,” says Aaron Beattie, plant breeder with the Crop Development Centre, College of Agriculture and Bioresources at the University of Saskatchewan. “Altogether, it’s a pretty big number with about $13.6 billion going into the Canadian economy due to Canadian barley production in 2021.”

Canadian feed and malt barley acreage, of which about 95 per cent is grown on the Prairies, has fluctuated between six- and seven-million acres over the past 10 years, but since 2018, there has been a steady rise to upwards of eight million acres in 2021.  That acreage produces between 8.5 and 10 million tonnes of barley each year.

Canada also exported two million tonnes of feed barley with most of it going to China and small amounts to Japan the U.S. 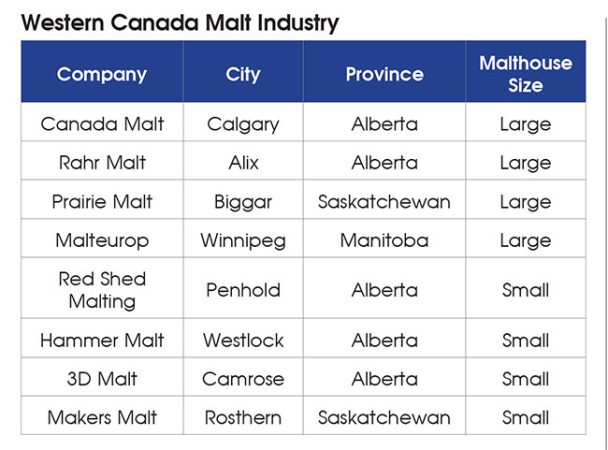 Plant breeding programs are the foundation of the malting industry
Like most crops, registered varieties offer a fairly long list of choices, but a few varieties have become the dominant ones grown by farmers and in demand by maltsters. In 2021, the insured acres saw only a few varieties grown on the most acres. CDC Copeland (37 per cent of total malt barley acres in 2021) and AC Metcalfe (12 per cent) are well established malting varieties since the early 2000s. AC Synergy was registered about 10 years ago, and the trend for its acreage is on the rise and is now grown on 30 per cent of malt barley acreage.

Long-term malt barley breeding programs in Western Canada include the CDC, which celebrated its 50th anniversary in 2021, along with the Field Crop Development Centre at Lacombe, Alta., that is associated with Olds College, and the Agriculture and Agri-Food Canada program in Brandon, Man. A malt barley breeding program in Fort Collins, Colorado, that is associated with Anheuser-Busch, also contributes lines tested in Western Canada.

More recently, international companies have been evaluating and testing lines in Western Canada including Limagrain out of Saskatoon, a French company Secobra, Syngenta out of the U.K., and Ackermann out of Germany.

Beattie says plant breeders can bring value to the malt barley industry with new varieties by focusing on different breeding objectives. These include agronomic traits important to farmers such as yield, lodging resistance and earlier maturity to help avoid weathering. In addition, disease resistance to spot blotch, scald, smuts and stem rust are also very important to farmers growing the crop. Fusarium head blight resistance is important to both farmers and brewers.

A study conducted in Alberta a few years ago looked at malt barley profitability. It assumed a commodity price of $5.50 per bushel for malt barley and input and capital costs of $300 per acre. Increasing yield by 10 per cent from 67 to 74 bushels per acre would increase profitability by 62 per cent. “When plant breeders can increase yield, it is money that goes directly into the farmer’s pocket,” Beattie says.

Quality is another important issue, and plant breeding objectives focus on test weight, thousand kernel weight, plumpness and uniformity of the grain.

“For maltsters in the ideal world, every grain barley would be exactly the same size, shape and weight,” Beattie says.

Malt quality is another important breeding objective. Craft brewers primarily use only malt barley in their brewing process, while large breweries may use other ingredients such as corn grits or rice as an additional source of starch that can help produce more alcohol. As a result, these two markets have different requirements for their malt quality. The big difference is that the craft industry doesn’t need as many starch degrading or protein degrading enzymes as the large brewers do.

“If a breeder can impact any of these different objectives, they are going to add value to the industry,” Beattie says.

Novel scald resistance
One example of adding value to the industry is research on a novel scald resistance. Typically, resistance has relied on genetics within the cultivated germplasm pool of barley, but historically the pathogen has overcome many of these genes. Richard Pickering, a barley researcher in New Zealand, looked for resistance in wild germplasm, Hordeum spontaneum, the wild progenitor of barley. He developed a line called 145L2, which was brought to plant pathologist Kelly Turkington’s disease nursery at AAFC Lacombe for testing. Over six years of testing from 2008 to 2014, the line typically didn’t develop much disease.

DNA analysis was conducted on 145L2 by the CDC to identify the source of resistance, and genetic markers were identified on chromosome 6H. The researchers then developed a molecular marker assay that allows them to identify this gene in breeding lines.

“If we make a cross with 145L2 as a parent, we can identify and track the gene through the progeny subsequently created,” Beattie says. “This is a very nice system because we don’t have to spend time growing the lines in a disease nursery, and can be done quite cheaply at about $1 per data point, compared to $5 to $10 per line in a disease nursery.”

Beattie says this approach is used for a many different disease resistance genes, and helps them to more quickly and cheaply incorporate new resistant genes into new varieties.

The CDC has a long history of bring value to the Canadian malt industry.
Photo courtesy of Chris Hendrickson.

Improving beer quality
As another example of bring value to the malting barley industry, CDC worked in cooperation with Sapporo Breweries to increase the shelf life of their beer. They focused on an enzyme produced during the malting process called lipoxygenase, or shortened to LOX-1. The presence of LOX-1 in malt can produce compounds in beer that cause the breakdown of foam stability and flavor. The objective of the research was to identify barley lines that lacked LOX-1 to maintain foam stability and flavor during storage.

In Sapporo brewing trials with CDC PolarStar, they found that CDC PolarStar had improved foam stability and a fresher taste for a longer period of time.

“These were two very beneficial quality attributes that changed as a result of having this LOX-less mutation,” Beattie says.

Since the release of CDC PolarStar in 2008, two more varieties with the LOX-less trait have been released; CDC PlatinumStar was released in 2014 and CDC Goldstar in 2017.

Steady progress in variety improvement
Beattie points out that breeders have made significant improvements in malt barley varieties over the past 20 years. New varieties like AAC Synergy and CDC Fraser are yielding 14 per cent more than the old standard AC Metcalfe, while CDC Churchill is even higher yielding at 17 per cent over AC Metcalfe.

On the quality side, new varieties are also lower in kernel protein content, which can help farmers meet maltsters’ low protein requirements. AC Metcalfe averages 11.7 per cent, and CDC Copeland at 11.1 per cent. CDC Churchill comes in at 10.7, AAC Synergy at 11.0 and CDC Fraser at 10.5 per cent.

These three new varieties also come with a higher ‘fine extract’ percentage, which is a measure of how much alcohol can be produced per unit of malt. Higher levels of fine extract mean the brewers can produce more beer per unit of malt. “From a brewer’s perspective, that’s a real benefit.”

“This is a potentially significant increase in profitability to the brewer if they use a hulless barley. This would be a novel way to increase value to the brewing industry. In addition, the lack of a hull may provide some novel flavour attributes to the beer,” Beattie says.