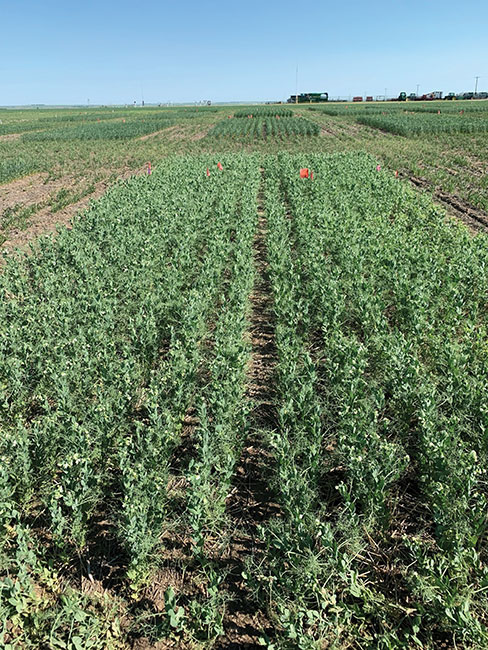 Diversified and sustainable crop production in a whole system approach can improve soil quality, carbon sequestration, resilience and cropping system profitability. Researchers and industry are investigating a range of crop rotations including several minor special crops, and their overall impacts in the semi-arid Prairie region.

“We initiated a large and complex research project in 2018 to develop sustainable crop production systems by including selected special crops into existing cereal, oilseed and pulse crop rotation systems in the semi-arid region of the Canadian Prairies,” explains Mervin St. Luce, research scientist with Agriculture and Agri-Food Canada (AAFC) in Swift Current, Sask. “We wanted to determine best management practices for sustainable crop production and to investigate how a diverse cropping system would impact productivity, economics, environment, carbon sequestration and nitrogen dynamics. Ultimately we want to know if these cropping systems would be profitable for farmers.”

This five-year project, in partnership with Mustard 21 Canada Inc., and the Diverse Field Crops Cluster (DFCC), included three interconnected study components: a controlled environment and carbon input study, a five-year crop rotation study and a three-year nitrogen response study. The controlled environment study is being conducted at AAFC Swift Current and AAFC Quebec City. The crop rotation study, which includes 19 rotations, is being conducted at Swift Current and Scott, Sask., and Lethbridge, Brooks and Oyen, Alta. The sites are all dryland except at Brooks, where supplemental irrigation was included. The nitrogen fertility study is conducted at all sites except Oyen.

“Our objective for the study is to develop a robust crop rotational database with highly valuable crop rotation technical information and knowledge for the semi-arid Prairie region,” says St. Luce. “The 19 crop rotations include the major crops of wheat, canola, field pea and lentil and several special or minor crops including oriental and yellow mustards, carinata, canaryseed, camelina, sunflower, flax and quinoa. We want to determine how the special crops affect the performance of the subsequent cereal, oilseed or pulse crops, as well as the entire cropping system. The crop rotation study is divided into two experiments, one examining the impact of major and minor crop species (Rotation Component 1) and comprises 14 crop rotations, and the other focusing on the impact of selected minor crops and has five crop rotations (Rotation Component 2).” 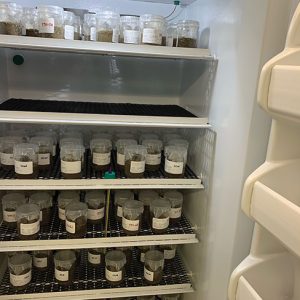 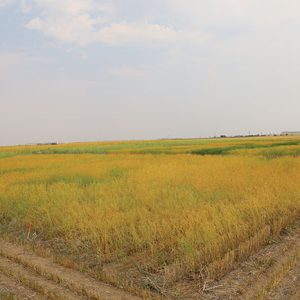 For the nitrogen response study, the objective is to update recommendations for growers with new information on nitrogen fertility management and optimum N rates for five special crops including yellow and oriental mustard, carinata, camelina and sunflower. The study commenced in 2019, but due to the COVID-19 pandemic, the 2020 field plots were cancelled, then continued in 2021 and will be repeated in 2022.

“We are looking at crop rotation effects, as well as N response in these five special crops, and in particular the potential impact of mustard species on N fixation by pulses,” explains St. Luce. “Mustard species can synthesize and release compounds such as erucic acid and glucosinolates that can alter soil microbial communities and potentially subsequent crops in rotation. We are collaborating with Diane Knight and Piumi Gallage [PhD candidate] at the University of Saskatchewan to take a more in-depth look at the effects of the previous special crops on N-fixing bacteria and N dynamics on peas and lentils. They are using nitrogen stable isotopes in small sections of the crop rotation plots at three field locations to assess nitrogen fixation, as well as more controlled lab experiments at the University to measure this impact.”

The soil carbon levels were measured at the beginning of the experiment and will be measured again at the end of the field trials in fall 2022. Soil tests were conducted every spring and fall to measure nitrate availability and to determine how these rotations are affecting N availability. “The fertilizer N recommendations for each crop are based on soil tests and adjusted for N credits for preceding pulse crops,” St. Luce adds. “In dry years, such as 2021, substantial amounts of N may be left in the soil as crop growth was not optimal due to the drought conditions. Our preliminary results, and as expected show lower N fertilizer requirements after pea and lentils compared to wheat. We also have one rotation that was fallowed in 2020, which also resulted in lower N requirements for the following crop. We are expecting low yields this year because of the drought, plus pests including grasshoppers have also adversely affected some of the plots.”

The third component is a detailed controlled environment and carbon input study to determine how these crops contribute to N cycling, as well as the carbon sequestration potential. At Swift Current, the lab experiments are focusing on the N cycling component and the Quebec lab on carbon sequestration. Both straw and root samples of all of the same major and special crops from the crop rotations and N response studies are being incubated in two different soils, a silt loam from Swift Current and a heavy clay from Oyen. The stubble and root samples were taken after harvest as a means to mimic the decomposition process following harvest.

St. Luce notes the pandemic had a big impact on this component of the study, with initial trials started in 2019 but abandoned part way through. The initial Quebec trials were abandoned after the first month, and are expected to restart in September 2021. These lab experiments will take six months to complete.

“In Swift Current, the trials were up and running for six weeks before we had to stop and dismantle the lab setup. We do have some preliminary observations for CO2 emissions, and have restarted the trials in 2021. Our preliminary observations from the various crops show that more CO2 was emitted in the first three days from quinoa, followed by sunflower, while the least amount of CO2 was emitted by flax and wheat. After the peak period, the levels dropped and were either constant or declining thereafter. It was interesting that the trends were similar across both soils. On average across both soils, the overall amount of CO2 emitted by crops after 28 days was highest from quinoa and sunflower, followed by canary seed, and the least by flax.”

The study will be completed in March 2023, and final results will be available then. St. Luce is looking forward to being able to provide more science-based and technical information on cropping system performance, optimum N requirements and best management practices for more diverse and sustainable crop rotations that include special crops.

The study will also provide the economics and profitability of diverse rotations, along with information on how special crops can help improve soil quality and contribute to carbon credits that producers can claim from adding special crops into existing cereal, oilseed and pulse crop rotations. The project is funded by the Agriculture and Agri-Food Canada’s Canadian Agricultural Partnership program, Mustard 21 Canada Inc, Saskatchewan Mustard Development Commission, Canadian Mustard Association, Government of Saskatchewan and Nuseed Canada Inc.