While there are many agronomic, geographic and environmental factors involved in achieving high yields in no-till canola, the two inputs that farmers can control that will give them the biggest bang for their input dollar are higher seeding rates and increased nitrogen fertility. Those are the findings of a three-year research study conducted across the Prairies by Agriculture and Agri-Food Canada (AAFC). Led by research scientist Neil Harker at AAFC Lacombe, Alberta, the 2008 to 2010 study included eight sites across Western Canada at Beaverlodge, Brandon, Edmonton, Indian Head, Lacombe, Lethbridge, Melfort and Swift Current.

“We wanted to see what level of agronomic inputs could be used to increase canola yield and oil concentrations relative to current production practices, and to determine which input practices increased yield and oil content the most,” explains Harker.

Part of the rationale for doing the study was influenced by the increasing demand for canola oil, and the subsequent high canola prices. Canola growers are looking both to increase canola yields and to grow canola more frequently in a crop rotation. The researchers wanted to assess both approaches.

Treatment design
Canola was direct seeded into cereal stubble the first year, and then followed a canola-wheat-canola rotation or continuous canola over the three trial years. Two target seeding rates of 75 or 150 seeds per square metre (seven to 15 seeds per square foot) and two nitrogen (N) rates of 100, or 150 percent of soil test recommendations, were used. Three nitrogen formulations-fungicide (prothioconazole) combinations were also included: uncoated urea-no fungicide, uncoated urea-fungicide, and 50 percent polymer-coated urea-fungicide. Herbicides, insecticides and fertilizers other than nitrogen were applied as required for optimal canola production.

Most treatments were based on the canola-wheat-canola rotation. This was used to provide an in-depth assessment of the varying input variables. Canola yield was assessed in the first and the third year. The three additional treatments of continuous canola were added to assess the yield impact of growing canola continuously.

Plots were seeded from late-April to mid-May using hoe or knife openers on 20- to 30-centimetre (eight- to 12-inch) row spacings at a depth of one centimetre (half-inch). Fertilizer (N, P2O5, K2O, S) was side-banded during planting two centimetres (3/4 inch) beside and three to four centimetres (1.2 to 1.5 inches) below the seed row at recommended levels based on soil tests and yield targets.

The Canola Council of Canada (CCC) recommended target plant population is four to 20 plants per square foot. This is based on older research studies from the 1980s. Harker explains that while the 7.5 seeds per square foot target rate falls within CCC recommendations, a seeding rate that low has risks associated with it.

“Lower seeding rates bring a lot of variables with them. You need to depend on good weed control and ideal stand establishment,” he notes. “The biggest risk with lower seeding rate is longer maturity and higher green seed. What you see with higher seeding rates is more stable, dependable yield, and that is reflected in our results.”

Fungicide treatment increased canola yields in 2010, which was surprising given the low level of sclerotinia stem rot infection. 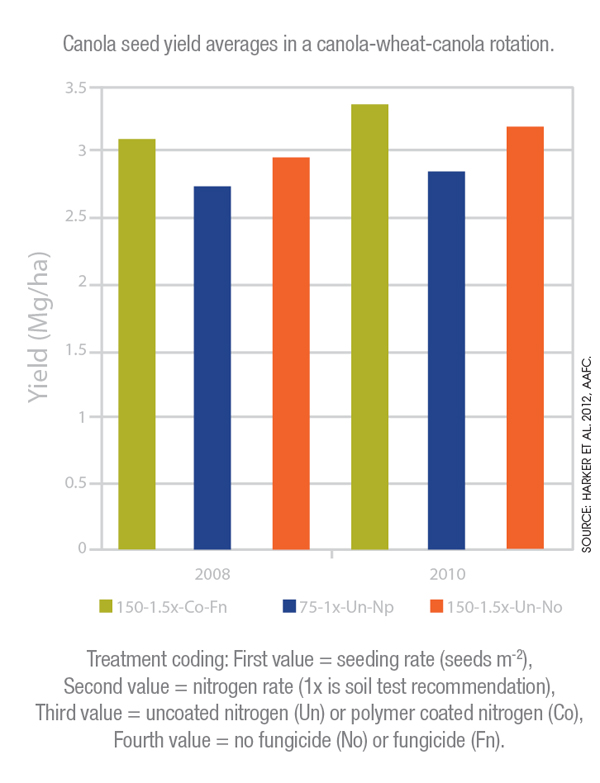 The big bang
A major objective of the study was to assess combinations of inputs to look for the biggest yield impact. The highest-yielding input combination was the 15 seeds per square foot seeding rate combined with 150 percent N rate plus 50 percent polymer-coated N and a fungicide application. This treatment yielded 5.9 bu/ac more than the base treatment in 2008 and 8.9 bu/ac more in 2010.

“High seeding and nitrogen rate combination were usually the top-yielding treatments and provided the most consistent response,” says Harker.

“If you aren’t comparing rotations, it can be hard to determine your losses from growing canola-on-canola stubble,” says Harker. “Some growers say they are doing fine getting 45 bu/ac with canola on canola, but you could be losing 5 bu/ac.” 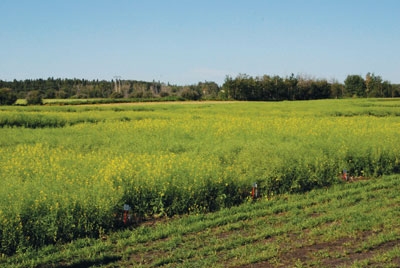 Increasing seeding and fertilizer rates can pay off with higher yields Higher seeding rates and increased nitrogen fertility give biggest bang for a farmer's buck.