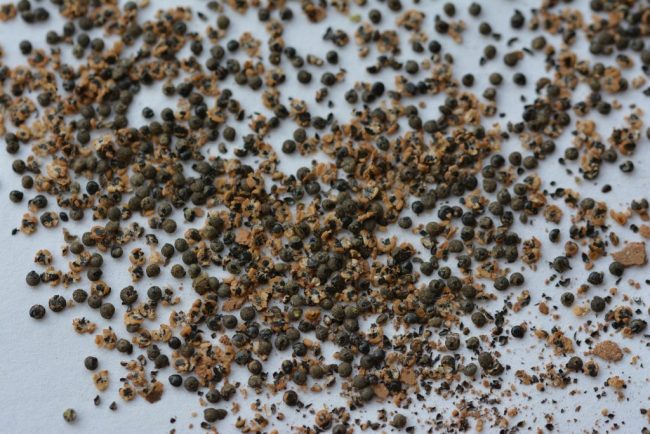 Weed seeds after running through the potato vine crusher that were planted in soil and petri dishes to determine weed population. Photos courtesy of AAFC.

In 2011, Agriculture and Agri-Food Canada (AAFC) scientists were researching ways to control European corn borer (ECB) populations, a common pest in potato crops that lay their eggs in potato vines after harvest and then mature the following year. As a way to target the pest at its source, they developed a piece of equipment dubbed the “potato vine crusher.” The novel equipment included two metal rollers, each attached to a motor, hooked up to a speed regulator running from a 10-horsepower generator. It was designed to attach to the back of a potato harvester; as potatoes were being harvested, the machine would crush the vines, killing the ECB larvae.

The potato vine crusher successfully reduced ECB populations. However, mature ECB have wings that allow them to fly from one potato field to another. In order to control populations in a given region, the majority of farmers, if not all, would have to adopt use of this new equipment. Unfortunately, this “all or nothing” approach caused the demise of the potato vine crusher.

“Harvest weed seed control is when during harvest, instead of returning weed seeds back to the field so they grow to become weeds, the weed seeds are harvested by removing them from the field completely or destroying them directly in the field.”

Going against the grain

McKenzie-Gopsill learned of the “Harrington weed destructor” developed in Australia – a tow-behind unit on a combine that destroys weed seeds when grain crops are being harvested. In order to adopt the harvest weed seed control concept to horticulture crops like potatoes, which are harvested differently than grains, he would have to think outside the box.

While presenting at a local university, McKenzie-Gopsill was approached by an AAFC colleague who had helped develop the potato vine crusher. They suggested that it could be used to crush weed seeds to reduce weed populations instead of its original intended use of crushing potato vines. Intrigued, McKenzie-Gopsill set out to test the idea. 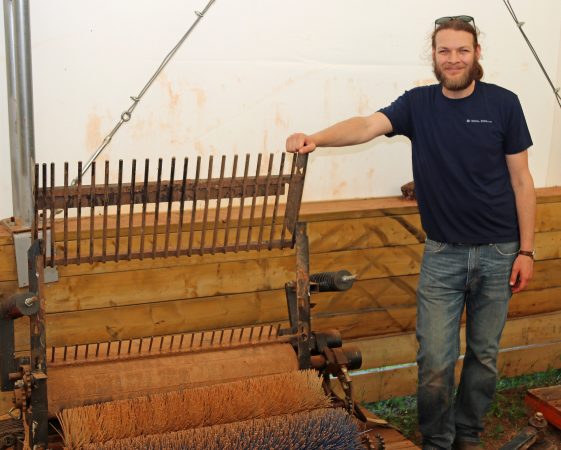 Without making any modifications to the potato vine crusher, McKenzie-Gopsill chose to test the equipment in a simulated potato harvest, taking potato biomass from the field, adding weed seeds to the mixture and sending it through the vine crusher. He then placed the crushed weed seeds into petri dishes and soil to see how they grew.

McKenzie-Gopsill tested the equipment first on common lamb’s-quarter weed seeds, as this weed is the most economically important weed in Canadian potato production. He discovered that the vine crusher was very effective in crushing lamb’s-quarter seeds, resulting in their inability to germinate and mature into fully grown weeds. Other weed species that affect potato crops were tested and they also did not germinate. These included redroot pigweed, barnyard grass, yellow foxtail and volunteer canola.

The results of the potato vine crusher’s ability to reduce weed pressure impressed McKenzie-Gopsill and his team. In a controlled petri dish environment, seed germination, or the ability of the crushed weed seeds to develop into a weed plant, was reduced by 60 to 95 per cent. The simulated harvest approach resulted in 50 per cent reduction in lamb’s-quarter and pigweed germination, while other larger weed seed species were reduced by 50 to 75 per cent. Therefore, the potato vine crusher could also reduce the amount of herbicide that farmers use.

“We’ve developed the first ever adaptation of harvest weed seed control for a horticultural crop like potatoes. It’s an exciting first step and potential for a huge breakthrough for weed management for farmers.”

The simple custom design of the potato vine crusher makes it fairly cost-effective for farmers, and McKenzie-Gopsill estimates it can be built for well under $10,000. He explains that while farmers can build and use this now, he intends to continue testing this summer to see how the equipment fares in actual field settings. He will then make modifications to the equipment to increase its effectiveness on reducing weed seed germination or sprouting.

McKenzie-Gopsill highlights the significance of his discovery by comparing his initial results to data published within the last two years by American researchers. They performed simulations with Palmer amaranth, similar to pigweed, on how effective this type of equipment would need to be in order to have a long-term impact. They estimated it would need to reduce weed seed germination by 20 per cent to stabilize weed populations – the amount of weeds will neither increase nor decrease.

“Our data shows in the simulated harvest that we are having a much greater effect than 20 per cent reduction on species that are not as invasive as palmer amaranth,” McKenzie-Gopsill says.