August 9, 2022
By Agriculture and Agri-Food Canada 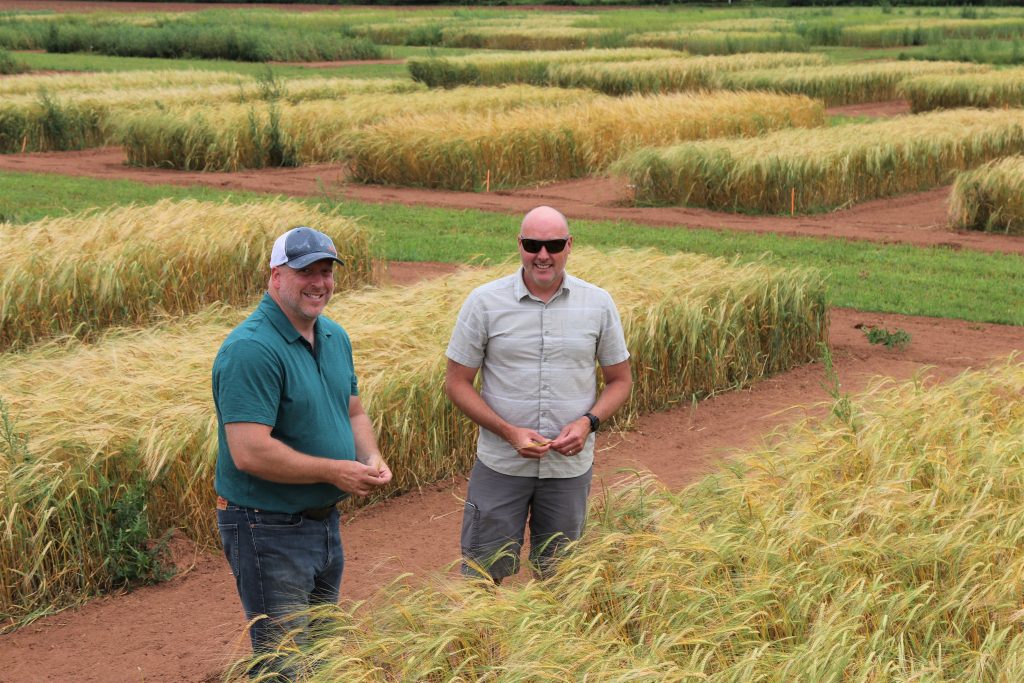 Agriculture and Agri-Food Canada (AAFC) scientists Aaron Mills and Jason McCallum are well on their way to developing the first commercial varieties of Maritimes wild hops. But you can’t brew beer without its other key ingredient – malt barley. It was only natural that Mills began researching the best malt barley variety to grow in the Maritimes, while providing expertise to farmers and helping to bring new flavours to beer drinkers.

Canada is known for producing some of the highest quality malt barley in the world. While 95 per cent of malt barley varieties are developed and grown in Western Canada, Mills is growing and evaluating heritage malt barley varieties on Prince Edward Island to see which ones work best for Maritime farmers, maltsters and craft brewers. These heritage varieties, grown commercially as recently as 1930, may not be as high-yielding as the modern malt varieties developed for large-scale brewers, but could have qualities that allow the plant to grow better on the East Coast. They also may have unique flavours that interest craft maltsters and craft brewers, who brew on a smaller scale.

“Our growing conditions, with high humidity and moisture, are closer to Europe, specifically the U.K. The European malt barley varieties from the U.K., France and Russia may be more suitable for the growing conditions in Eastern Canada compared to the varieties that perform well out West.”

Mills is interested in finding the best varieties for grain farmers and the brewing industry on the East Coast, regardless of where the varieties originate. One of the varieties being tested includes the heritage variety called “Chevallier.” It was first developed in the U.K. in 1870 and is normally found in golden ales and IPAs. Chevallier has recently been commercialized by Crisp Malting in the U.K. and is now widely distributed in both Europe and North America. Mills is also testing malting barley variety AAC Synergy in the Maritimes, as this variety is gaining popularity in Canada due to high yields and consistent quality.

“Learning how to grow malt barley on the East Coast has been a steep learning curve. It’s not your typical feed barley, it requires a lot of love and precise crop management. Our work will hopefully provide valuable insight for farmers in the region to get the best results from their crop.”

Mills, along with other AAFC and industry scientists across P.E.I., Alberta, Manitoba, Saskatchewan, Ontario, Quebec, Nova Scotia and New Brunswick, recently participated in Canada’s first national evaluation of nitrogen management for AAC Synergy. While nitrogen fertilizer application can be very effective in increasing barley yield, too much nitrogen can reduce malting barley quality. The team evaluated nitrogen fertilizer application practices on malt barley crops as well as rotational crops planted prior to barley, such as brown mustard, peas, canola, faba bean and soybean. These rotational crops planted in the years prior often provide nitrogen to the soil that helps the next crop to grow.

The team discovered that legumes, like faba bean and soybean, planted prior to barley provided the most benefits to yield and quality of the malt barley and also meant that farmers can reduce the amount of nitrogen fertilizer applied to the malt barley crop.

When a variety has been shown to work well for farmers in the Maritimes, it then needs to be assessed for malt quality and beer flavour. Mills is collaborating with Shoreline Malting, located in Slemon Park, P.E.I. One of the partners at Shoreline, John Webster, is interested in seeing how the varieties grown at the Harrington Research Farm can add value to the craft brewing industry.

“Each malt barley variety brings their own unique flavour and aroma to beer, and that excites the craft brewers who are interested in the Maritime-grown varieties,” Webster says.

Once Webster receives field data like yield, protein levels and pre-harvest sprout information from Mills, he will select the best barley variety to be malted. The malted barley will be used to brew test batches of beer and sent to interested brewers to compare taste, colour and aromas. 2 Crows Brewing Company in Halifax, N.S., is interested in developing new beers from older heritage varieties. They plan to evaluate how increasing the production of beer with heritage varieties may affect taste and flavour profiles, as well as potentially matching specific barleys with specific beers.