Features Agronomy Cereals
A weapon in the fight against fusarium

Method is not a biotech application. 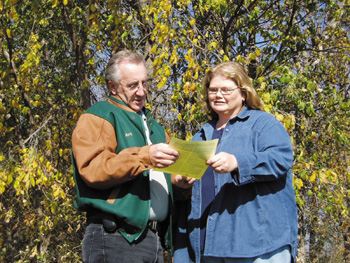 Fusarium and wheat. For years, growers have had to accept the risk of one with
growing the other. While there has not been a recent outbreak in Ontario to
rival 1996, there is the constant threat given the province's potential combination
of cool and damp conditions at pollination. And while the use of Folicur is
now a welcome option in the fight to minimize the potential for fusarium, there
is a new research tool that could pave the way to even greater control of the
disease.

Virus Induced Gene Silencing (VIGS) is a process that identifies genes responsible
for fusarium infection by introducing the virus into a wheat variety, and then
silencing or 'switching off' the gene. The process of imparting this gene silencing
application is still years from the breeding stage. But success has been achieved
developing a VIGS assay for identifying wheat genes that contribute to fusarium
head blight resistance.

Dr. Steve Scofield, a researcher with the United States Department of Agriculture's
Agricultural Research Service (USDA-ARS) in West Lafayette, Indiana, has been
working with VIGS in cereals since 2002. Prior to that, he used the technology
attempting to engineer disease resistance in vegetable crops. "Tobacco
was the first crop in which VIGS was developed and used to probe mechanisms
of disease resistance," says Scofield.

He adds that he proposed developing VIGS in wheat to the USDA-ARS when applying
for his job, but it carries a large number of challenges compared to other plants.
"First of all, the genome in wheat is enormous, it's 128 times the size
of arabidopsis," the geneticist's favourite model plant.

Wheat's structure unique but 'better'
The hexaploid structure of the wheat plant also confounds the conventional process
of gene identification because six copies are present that can mask mutations
that could be used to identify genes that impart resistance. Yet, according
to Scofield, VIGS in wheat has turned out to work better than in barley which
has just two copies of each gene.

The process begins with identifying a genotype of wheat that has a naturally
high level of resistance to fusarium. By testing methods, one gene is found
that may be involved in imparting resistance. "We then can put a fragment
of that gene into the virus, used for VIGS, then infect the plant and allow
the silencing to be established, and then we infect the head of the plant with
fusarium and observe whether the plant remains resistant to fusarium, or because
of the silencing of the gene, might become susceptible," explains Scofield.
"If it becomes susceptible, then we have a very strong suggestion that
the gene was essential for resistance."

It sounds as though it takes a long time to assess resistance, but Scofield
insists VIGS speeds the identification and confirmation of resistant genes and
allows him to test more candidates for resistance. "It's not going to have
an immediate effect in terms of what farmers are able to plant in their fields,
but it should help breeders in the near future," says Scofield. "If
we found gene 'X' was essential to the mechanism, and geneticists might know
that in different varieties of wheat there were versions of gene 'X' that were
superior, then those could be bred into fusarium resistant lines." -30-