April 15, 2014 - Michigan State University's 5,200-acre campus is primarily powered by the T.B. Simon Power Plant, which burns coal, natural gas and biomass to produce steam that is used for heat and electricity. Coal has been the plant's fuel source since it's inception, but research within the past two decades has shown the harmful byproducts of this energy source. As a result, the university has begun to increase the use of natural gas and biofuel at the plant, and has installed equipment to reduce emissions.

The Energy Transition Plan adopted by the MSU Board of Trustees in 2012 aims for the university to eventually be 100 percent reliant on renewable energy sources. The plan outlines a requirement of 15 per cent campus renewable energy by the year 2015 and 40 per cent by 2030.

To help meet these goals, a group of MSU researchers and students are collaborating to explore efficient ways of converting woody biomass into viable coal alternatives.

Christopher Saffron, assistant professor in the departments of Biosystems and Agricultural Engineering and Forestry, is leading the project aimed at transforming bulky woody biomass into dense, compact forms that have low ash content to minimize the risk of fire, can be easily transported, are water-repellent and can be stored outdoors for extended periods of time.

"It's a replacement for coal," Saffron explained. "Although it's completely derived from biomass, it burns like coal. It is brittle like coal. It behaves like coal, so it's a drop-in coal substitute that we're attempting to make."

The first step in converting the biomass into a renewable energy source is putting the wood chips through a process known as torrefaction. This process, which Saffron calls a "mild pyrolysis," takes place in a torrefaction reactor, which heats the biomass in an oxygen-free environment to temperatures between 250 and 350 degrees Celsius for up to 40 minutes at a time.

Saffron is overseeing a team of undergraduate students who are designing a densification system to transform the torrified biomass chips into a more compact, denser form that can be economically transported. Following the torrefaction process, Saffron said the brittle, lightweight chips are ground into a fine powder.

"Then we must densify the ground torrefied biomass to a level where it's affordable to transport," he said.

"It's important that transportation vessels be load-limited and not volume-limited to reduce hauling costs. Volume-limited transport results in hauling light loads, which will require many trips. We aim to avoid this expense by densifying biomass into briquettes, pellets or pucks, which reduces the number of trips between the regional torrefaction facility and the power plant."

Saffron notes that having biomass cultivation near torrefaction facilities would also offer an economical advantage. In fact, some of the woody biomass he plans to eventually burn at the university power plant has been planted on the southern part of the campus. Fellow MSU AgBioResearch scientist Raymond Miller is in charge of the hybrid poplar plantings, which are expected to total 60 acres.

"This collaboration really underpins the conversation. Those trees can be harvested every 6 to 9 years, and they grow on land not used as agriculture to avoid the food versus fuel debate," Saffron said. "In addition, there are a lot of landowners no longer supplying material to the paper industry because of its decline in the Upper Peninsula. Something like this could come along and give them another product to produce and help stimulate the economy."

Saffron said his lab is examining the use of small, pellet-shaped forms of the torrefied material as well as larger sizes in the shapes of briquettes and hockey pucks.

"There are a lot of groups looking at torrefied material," he said. "The new piece is going to be the operating conditions required for the densification system to generate stable pellets, briquettes or pucks.

That may involve a number of things from different temperatures during the densification process to binding agents that can hold the pellet together. Making the final material stable is really the new part of the equation, and that's where our research program is headed."

Saffron said he is confident that this technology can compete with other alternative energy sources, especially given Michigan's increasing inventory of biomass.

"It's very difficult to compete with fossil sources of energy because of the costs," he said. "Coal is probably about half the price of torrefied biomass, and natural gas is even less expensive nowadays. However, with the new mandate in Michigan, we no longer have to compete head-to-head with coal. We compete with other alternative sources of energy — wind and solar — and we think we can be competitive with those, especially when you put them on equal footing."

A pilot burn of the torrefied biomass is expected to take place at the T.B. Simon Power Plant this spring. 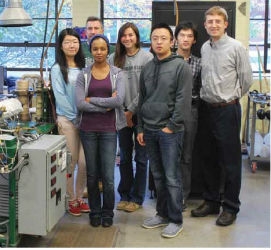