Getting down to the bread and butter of plant breeding, a collaborative five-year research initiative aims to develop improved techniques for use in wheat breeding programs in Western Canada. By advancing understanding of the inner workings of wheat cells, the researchers aim to develop more efficient, faster and less costly methods for creating better varieties.

This research, funded by the Western Grains Research Foundation, has three strategic activities. One component, led by Dr. Curtis Pozniak of the Crop Development Centre (CDC) at the University of Saskatchewan, aims to improve and develop new DNA markers to improve selection efficiency in Canadian wheat breeding programs. A second component is focusing on enhancing leaf rust resistance; Dr. Brent McCallum of Agriculture and Agri-Food Canada (AAFC) leads this component. And AAFC’s Dr. François Eudes leads the third component, which involves developing a more efficient way to create inbred lines that are breeding true. “This is a truly collaborative initiative that includes all major institutions in Canada involved in wheat research,” says Pozniak.

The project involves CDC; AAFC’s research centres at Lethbridge, Swift Current and Winnipeg; the National Research Council’s Plant Biotechnology Institute; and the Universities of Alberta and Manitoba. By bringing together all of their diverse expertise, the researchers hope to create synergies that will further advance wheat breeding on the Prairies.

Improving DNA markers
A DNA marker is a specific sequence of DNA that is associated with a particular trait. Researchers use these markers to quickly screen breeding material in the lab for the desired traits, rather than having to take weeks or months to grow seeds into plants and test them for those traits. “Breeders are currently using marker-assisted selection, but we hope to develop more effective markers,” explains Pozniak, a durum wheat breeder who also specializes in molecular genetics. He will be taking a genomics approach to marker development; genomics is the study of an organism’s complete DNA sequence.

He says, “We hope to sequence some of the very best Canadian wheat varieties that each contain genes of interest to our breeding programs. Using this information, we will then identify the ‘next generation’ of DNA markers associated with traits that we can target with marker-assisted selection.”

These next-generation markers have several advantages. For instance, they’re more accurate than some of the existing markers. Some current markers are “linked markers”; that is, although they are near the gene’s location on the wheat chromosome, they may not actually be part of the gene. In that situation, there is a possibility the DNA marker may be present, but the actual gene lost or altered, so that the desired trait will not be expressed in the field.

With the genomics-assisted approach, Pozniak’s research team will know exactly where the genes are located along the wheat chromosomes so that they can ensure the markers developed have a much higher probably of indicating the presence of the actual gene conferring a desirable trait. He says, “We’ll be able to track the individual genes with the desired traits and make sure that we retain them throughout the breeding cycle.”

Another advantage of the new markers, which are called single nucleotide polymorphisms or SNPs, is that they are well suited to high-throughput screening procedures. As part of this project, Pozniak’s research team will be developing procedures that can screen tens of thousands of individual plants using DNA markers much more quickly than before.

As well, Pozniak’s research will indirectly help breeders to address traits such as yield, which are associated with multiple genes, rather than a single gene. He says, “Breeding is very much a numbers game where we’re selecting for a whole suite of traits: yield, maturity, straw strength, disease resistance and end-use quality, throughout the breeding cycle. Any tools we use to ensure that the materials we’re advancing in our breeding programs carry a desirable complement of genes are going to improve breeding efficiency. And that will allow breeders to then focus on other high-priority traits like yield, where DNA markers can’t be used as effectively.”

These next-generation markers will increase the efficiency and effectiveness of our wheat breeding programs. Pozniak says, “What’s most exciting is that we can go right from the DNA sequence, follow it in our breeding programs, and make sure those genes that are important to producers are maintained in newly developed varieties.”

This component’s objectives are: to assess the effects of three leaf rust resistance genes, called Lr34, Lr46 and Lr67, individually and in combination in wheat plants; to develop better DNA markers for these genes; and to incorporate the three genes into elite wheat lines. These three genes appear to have a different mode of action than those genes that confer less durable leaf rust resistance. “Lr34  was introduced into wheat cultivars in Canada in the 1970s and it’s been effective ever since. It doesn’t give complete immunity to leaf rust, but it does give an intermediate level of resistance. So with just that single gene, we’ve been able to protect a number of cultivars from having very severe epidemics,” says McCallum. “Currently about half our wheat cultivars have Lr34. We’re working with the breeders to try to incorporate Lr34 into all future cultivars.”

“Lr46 has been used a lot in cultivars developed at CIMMYT (the International Maize and Wheat Improvement Centre) in Mexico for many years and has proven to be durable. We would like to start introducing it into our Canadian cultivars,” he adds. “Lr67 was discovered in Canada by Peter Dyck in the 1970s. We just mapped it recently and named the gene. Lr67 really hasn’t been employed in agriculture anywhere in the world. However, it acts in all aspects like Lr34 and Lr46, so we’re hoping it will prove to be durable and that we can get it into Canadian material so it will be the first material on the market with Lr67.”

McCallum hopes incorporating all three genes together in a cultivar will have an additive effect. “We hope we can move from Lr34’s intermediate level of resistance to fully resistant or nearly immune by adding these other two genes. And hopefully those two will be as durable as Lr34 has been, so the resistance won’t break down over time.”

He also notes the three genes confer more than just leaf rust resistance. “Lr34, Lr46 and Lr67  are unique in that they control not only leaf rust, but they also have an effect on stripe rust and stem rust, and they are supposed to have an effect on powdery mildew. Most other rust resistance genes control just one pathogen; the leaf rust genes only control leaf rust, and the stem rust genes only control stem rust.”

A faster route to fixed breeding lines
Eudes’ component is targeting a process called isolated microspore culture. He aims to make this procedure more efficient and to share the resulting know-how with the research centres involved in the project and possibly with other wheat breeding programs.

Isolated microspore culture is already a couple of steps up from the conventional breeding techniques used to create fixed breeding lines. In simple terms, conventional breeding involves crossing two lines to produce offspring with half the genes from the mother and half from the father. It then takes a number of generations of self-pollination to get an inbred line, in which both sets of genes are identical, so that the genetics are fixed. This process can take about eight to 10 years, including the time needed to screen out unwanted offspring from each generation.

For much of the past 20 to 30 years, techniques have been available to more quickly fix the genetics of breeding lines by creating what are called “doubled haploids” in the lab. Currently, the doubled haploid process used in most of AAFC’s wheat breeding programs in Western Canada is complicated. It involves corn pollination of an emasculated wheat plant and “rescuing” the 12-day-old embryo because it has only half the usual set of chromosomes (the corn set of chromosomes is naturally eliminated from the egg cell), then getting the embryo to germinate, and treating the plantlet with colchicine, a chemical to induce chromosome doubling. “The colchicine treatment is so harsh that the plants are only able to produce one or two spikes with seeds, and the breeder needs to do a seed multiplication, which takes a minimum of four months for spring wheats and eight or 10 months in winter wheats,” notes Eudes, a cereal biotechnologist at AAFC’s Lethbridge Research Centre. “This is a cumbersome process that takes a lot of human resources and quite a lot of time. I think we’ve reached the point where the technique is well mastered and there’s not much more progress that can be done in this area.”

The isolated microspore culture technique for creating doubled haploids is faster. Eudes says, “Isolated microspore culture involves culturing immature pollen grains. It produces embryos, with spontaneous chromosome doubling, so that both sets of genes are identical. These embryos grow, germinate and produce a green plant that can be given to breeders. The seed set produced from the doubled haploids deriving from isolated microspore culture is much bigger, so the breeder doesn’t need to do a seed multiplication step before going to the field. He can collect the seeds from that plant coming from the Petri dish and right away go to the field, have two rows of plants and start to evaluate the lines.”

Now, Eudes wants to make the isolated microspore culture procedure even more efficient by addressing two key issues that currently limit its success rate and broad adoption by breeding programs. He hopes to greatly increase the number of cells that survive and go through the embryo generation process so more plants can be produced in the lab. And he would like to reduce oxidative stress within the cells. Oxidative stress can result in serious
problems, like albino plants lacking photosynthetic capacity.

These efficiencies could save about three to four years in the cycle of cultivar development and would reduce the cost of producing doubled haploids. He says, “The costliness of the method currently used to produce doubled haploids is a limiting factor for the use of doubled haploids in breeding programs. Programs without enough funding have to use conventional techniques, going through those eight to 10 years to really fix the genetic material.”

Eudes notes, “We also hope to simplify the process and make it user-friendly. We would like to develop it as a kit, so we can easily transfer the know-how to the breeding programs.”

He hopes to create an isolated microspore culture lab service at CDC to produce doubled haploids for breeders.
By gaining a deeper understanding of the wheat genome and the inner workings of plant cells, the project’s three components will contribute to valuable practical advances in wheat breeding for Western Canada. 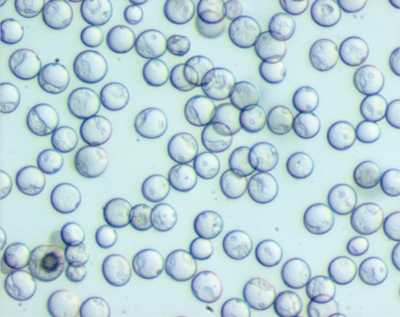 Isolated microspore culture involves turning immature pollen grains into plants. Getting down to the bread and butter of plant breeding