Aug. 19, 2015 - Determining the identity of parasitic wasps — some measuring less than a millimeter long — can be a time-consuming process that includes comparing their features to descriptions in published works and disparate specimen collections. Now, the same task could begin with the click of a mouse, thanks to an international team of researchers.

The team has published a new online document called a "monograph" that consolidates the latest information on the wasp superfamily Cynipoidea. The monograph uses pairs of interactive, image-based identification keys — including those of wing shape, body segmentation and other characteristics — to help users navigate to the correct genus or species of the wasp of interest, along with available biological, geographic and other information about the insect, including locations of existing specimens.

Cynipoid wasps are critical components of natural and agricultural ecosystems, attacking the larval stages of pest flies, such as leaf-mining flies and fruit flies, according to Matt Buffington, a team member and entomologist at the USDA Agricultural Research Service's (ARS) Systematic Entomology Laboratory in Washington, DC.

The monograph focuses on species from the Afrotropical Region, an area encompassing all of Africa south of the Sahara Desert as well as the southern Arabian Peninsula, Madagascar and surrounding islands. The monograph will not only make it easier to identify and categorize new species as they're discovered, but it will also broaden scientific understanding of their taxonomic associations and biological diversity. This could prove especially important in identifying wasp species that have potential as biological control agents, such as those that parasitize crop-damaging flies.

Buffington collaborated on the monograph with Simon van Noort, with the Natural History Department at the Iziko South African Museum, and Mattias Forshage, with the Swedish Museum of Natural History.

You can read more about their research in the August issue of AgResearch. ARS is USDA's principal intramural scientific research agency. 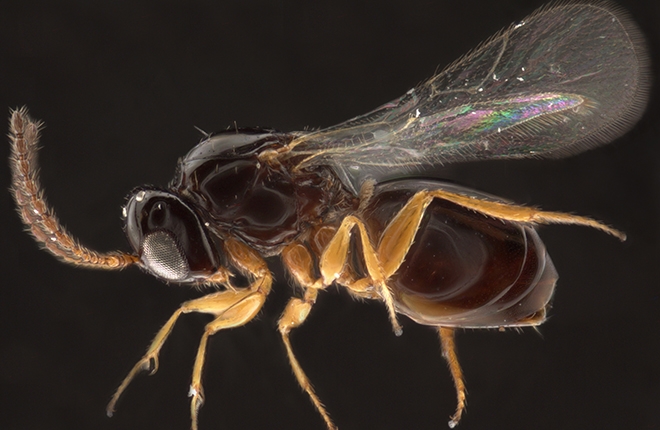 A new online resource will make it easier to identify and study parasitic wasps A new key-based system for identifying parasitic wasps has been developed.
Print this page