According to weed specialists, it's likely just a matter of time before glyphosate-resistant waterhemp arrives in the province of Manitoba.

Before the 1980s, waterhemp seems to have been a fairly uncommon annual weed in crops in the U.S. Midwest. Then in the mid to late 1980s and 1990s, the weed became a growing concern. One of the reasons for that was waterhemp's ability to develop herbicide resistance. For instance, in the 1990s waterhemp biotypes with resistance to Group 2 or Group 5 herbicides became increasingly common in the Midwest.

"In my own experience, waterhemp was a relatively unknown weed in North Dakota until we got the Roundup Ready crops and the overuse of Roundup," says Dr. Rich Zollinger, extension specialist in weed control at North Dakota State University (NDSU). That management change led to the development of glyphosate-resistant waterhemp.

Waterhemp's ability to continually overcome our control measures provides a great example of Zollinger's motto: "Mother Nature always wins. No matter what we do, Mother Nature will find a way to upset our most glorious plans."

Waterhemp is now such a problem in eastern North Dakota, particularly along the Red River, that NDSU named waterhemp its Weed of the Year in 2012. NDSU gave 16 reasons why waterhemp has become so troublesome. Some of the reasons relate to the weed’s biology, and some relate to management practices.

Zollinger highlights a few of the reasons. "The seed is small and light, so it can be transported very easily through water flow, especially flooding. The plant has a very long germination period. It can emerge with the main weed flushes in the spring, and emergence can continue all the way into August [so two post-emergent herbicide applications may be needed to control it]."

Waterhemp also takes advantage of any opening in the canopy. If there is a drowned-out area or a skip with the planter, it thrives in that kind of a situation. "In waterhemp, one plant is male and the other is female, and the female plants can produce easily over a million seeds per plant. In Iowa, a waterhemp plant was documented to produce almost five million seeds," notes Zollinger.

"But probably the most important factor is that waterhemp has become resistant to several different herbicide modes of action including Group 2 [amino acid inhibitors]. We just discovered Group 4 resistance, which are growth regulators; Group 5, the triazines; and of course glyphosate, Group 9. Some states have waterhemp populations that are resistant to Group 14, the PPO inhibitors, or Group 27, the HPPD inhibitors. And there’s multiple resistance in some states: for instance, some populations are resistant to Group 2 and Group 9 and Group 14 or 27."

Waterhemp's adaptability to different weed control tactics comes from its wide genetic base. The weed relies on cross-pollination, rather than self-pollination, so there is always a mixing of genetic material. Given its huge seed production, there’s a good chance the population will include at least a few individual plants that are resistant to the current control measures. As well, waterhemp's pollen spreads by the wind, so pollen from resistant plants can easily spread resistance genes to new areas.

In addition, waterhemp and several other weed species in the same genus, Amaranthus, are able to interbreed, which can be another way to spread genetic adaptions to different conditions. Waterhemp itself used to be considered two species – Amaranthus tuberculatus and Amaranthus rudis – but frequent hybridization between these two has led many weed scientists to consider them as one species. Some other Amaranthus weeds in Manitoba include redroot pigweed (Amaranthus retroflexus) and green pigweed (Amaranthus powellii).

Some of the other reasons for the rise of waterhemp in North Dakota include overreliance on glyphosate alone, mistaken identification of the different Amaranthus species and the resulting ineffective herbicide selection, failure to make timely herbicide applications to control small plants, mistaking herbicide resistance for herbicide application problems, and failure to remove early infestations of herbicide-resistant plants.

Manitoba situation
"So far waterhemp has not been reported as a major weed anywhere in Manitoba, although we know the weed may occur in a few spots in the province," says Dr. Nasir Shaikh, provincial weed specialist with Manitoba Agriculture, Food and Rural Development (MAFRD).

"However, glyphosate-resistant waterhemp will show up in Manitoba eventually; it's just a matter of time."

Data on the spread of glyphosate-resistant waterhemp show that it's moving north toward the Manitoba border. Dr. Jeff Stachler of NDSU and the University of Minnesota has produced a series of maps tracking the yearly spread of glyphosate-resistant weeds in North Dakota and Minnesota. Those maps show that glyphosate-resistant waterhemp was first confirmed in 2007 in a county on the Minnesota River, a tributary of the Red River. Since then, confirmed and highly suspected occurrences of this biotype have multiplied, spreading along the Minnesota River and then the Red River. As of 2013, the biotype had spread as far north as Traill County, about 200 kilometres south of the Manitoba border.

Shaikh and his Manitoba colleagues collaborate with Stachler, Zollinger and other weed specialists in the U.S. and Canada to share information on the latest weed issues. Shaikh notes, "We are definitely keeping an eye out for weeds that may move from south of the border into Manitoba, especially through waterways, via the Red River Valley or even the Souris River."

The spread of glyphosate-resistant weeds is a key issue. "Over the last couple of decades, many growers have moved toward minimum or zero tillage, and they have been using glyphosate year after year after year. Especially with a species like waterhemp, which has a very wide genetic base and can produce from 200,000 to 5 million seeds per plant, there’s so much genetic diversity that it is very easy for it to develop resistance when the same herbicide is used again and again," says Shaikh.

He is also concerned about the potential for the spread of herbicide resistance through crosses between waterhemp and its Amaranthus relatives. "Redroot pigweed, which is a close cousin of waterhemp, is a major weed in Manitoba. Unfortunately we have Group 2-resistant redroot pigweed in Manitoba and this biotype has been spreading somewhat over the last few years." As well, Manitoba has Group 2-resistant green pigweed (also called Powell amaranth).

For now, Shaikh advises Manitoba growers to be on the lookout for waterhemp. It can be hard to distinguish waterhemp from its pigweed cousins, especially at the seedling stage. But, as Zollinger notes, there are good online sources for accurate identification of the various species in this family.

"And of course if anybody is overusing Roundup, then that would be an environment where glyphosate-resistant waterhemp would come through quite quickly."

Shaikh reminds growers to take steps to reduce the risk of herbicide-resistant weeds developing on their own farms. "Once a weed develops resistance, it's like the horse is already out of the barn; you can't use that herbicide chemistry anymore. Integrated weed management is the key [to preventing and managing herbicide resistance]. It includes practices like rotating crops, rotating herbicide modes of action, and using non-herbicide methods of weed control – mechanical, cultural and agronomic methods."

He adds, "The biggest plus we have in Manitoba is a lot of diversity of crops. That really helps us to have a more diverse crop rotation and a better herbicide rotation compared to south of the border."

Zollinger also recommends scouting about one or two weeks after each herbicide application to check for resistant weeds. If most of the weeds in the field are dead but a few individual plants have survived, then those individuals may be resistant to the herbicide. Resistance needs to be confirmed through lab testing to make sure the plant’s survival is not just due to something like a sprayer skip.

If you find plants that you suspect may be herbicide-resistant, Zollinger suggests erring on the side of caution: kill or remove the plants before they set seed.

With a single plant releasing perhaps a million seeds, a serious infestation could develop very rapidly if glyphosate-resistant waterhemp plants are left unchecked. 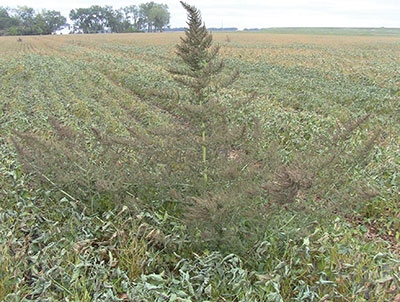