Features Agronomy Other Crops
A new go at processing hemp 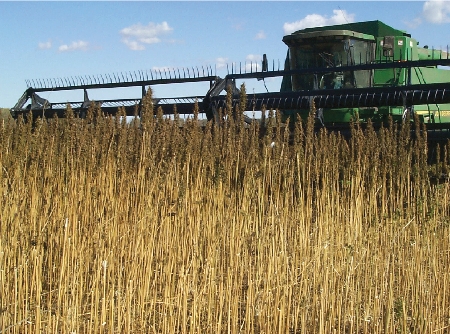 Growing hemp is nothing new. Farming hemp in western Manitoba goes back a century to eastern European pioneers. In China, it dates back 7000 years. In recent times, Canada cracked open the window in 1998 to modern industrial hemp production in North America. Licensees included nine Manitoba growers for 20 acres each. “For us, it all began at that time,” says Art Potoroka of Ethelbert, Manitoba. Potoroka seeded 425 acres of hemp in 2010. He is also a municipal reeve and is directly involved with several hemp-related projects.

At the peak of the “hemp rush,” earlier this decade, Canada had about 20,000 acres of industrial hemp. Western Manitoba and eastern Saskatchewan, the heartland, had 80 percent of the acres.

The first hemp crops grew like weeds, as tall and heavy as corn, recalls Potoroka. Virtually unmanageable, hemp would wrap on headers and inside combines. Some led to harvest-time fires. Then growers had market trouble. Production contracts for 50 cents per pound paid off at 10 cents, for birdfeed. The rush collapsed.

Crop management
Since then, a faithful few have solved issues, organized and supported market efforts. Supporters hoped to harvest 25,000 acres of industrial hemp in 2010.

Parkland growers have developed dual-purpose varieties well suited to the area. Fibre is ready for harvest in less than 90 days; grain matures in about 110 days. It is still a hardy and tough crop, Potoroka says, but a bit shorter and tamer than a decade ago.

Wet soil in May and June is the most common production problem. Heavy rain and strong winds in June or July also may do damage.

Potoroka does a two-stage harvest. He clips the heads for grain, and returns for a fibre harvest a few weeks later. Sometimes, he collects the fibre in early spring. His crop inputs are modest, similar to wheat, and his only weed control work is a burnoff prior to seeding. Mid-season, in some years, sclerotinia stem rot can be an issue. He maintains a normal crop rotation, and his net return to the farm, per acre, equals or exceeds canola.

Fibre company
Harvested hemp can break down into long fibres from the outer stalk, short fibres and hurd from the hard inner core. The natural fibre is soft and durable, with a growing list of uses. The best prospect for hurd seems to be construction material.

Plains Industrial Hemp Processing Ltd., scheduled to open in April 2011, initially will process hemp at six tonnes an hour. The $10-million facility is being built by Robert Jin, a Chinese-Canadian partner and businessman.

Jin came to Canada in 2006 from Shanghai, looking for a hemp fibre supply for his yarn factory. He did not find fibre ready to export, but he did find hemp bales dating back as far as 1999. Three inches under the weathered surfaces, he found good material. At his own expense, Jin imported proprietary machinery for a pilot plant near Gilbert Plains. He worked with Potoroka in the winter of 2008-09 to produce semi-finished long fibre that he sent to his factory.

Results were excellent, Potoroka says. Sweaters, shirts, yarn, insulation, matting, car panels and even car headliners were manufactured and sent back to Jin as samples of what could be produced. Some of the fibre was from Potoroka’s fields.

Potoroka says, “This fibre plant will do 7000 tonnes the first year. That’s not large, but this is just the beginning of things to come. We will need about 5000 acres for fibre, the first year.”

The fibre market
Manitoba has its own business development specialist for fibre and composite materials, and a Composites Innovation Centre on Smartpark at the University of Manitoba. It also participated in developing a national industrial hemp strategy in 2009. “The Composites Innovation Centre does broad technology and product development for all types of natural fibre,” says Eric Liu, a fibre and composites specialist with Manitoba Agriculture, Food and Rural Initiatives, who welcomes the development at Gilbert Plains. “I help companies develop and market their products using natural fibres, including industrial hemp, from Manitoba resources. Unless the fibre side of the hemp industry picks up, the acreage probably will not grow tremendously. We need a strong pull on the fibre side.”

Manitoba growers need to develop or improve hemp harvest practices that are friendly to the fibre industry, he suggests. Europeans have advanced technology for high-quality fibre harvests, and have dominated the supply side, but that could change. The EU subsidy for natural fibre is due to be reduced by 2012. “Probably, fibre production in Europe will be reduced. Assuming the demand is still there, it means there will be a huge opportunity for growers in Canada,” Liu says.

The seed and oil market
While Jin sees fibre in the field, the natural health food industry sees gold in the seed. It sees hemp as anything but industrial.

Thirty-two southwest Manitoba growers are now acting on their vision for hemp oil. In January 2010, they received federal and provincial support to build a large-scale hemp oil facility.

The Farm Genesis Marketing Group, in Waskada, is investing about $6 million to extract and export hemp oil to an international market. It has 1800 acres of hemp in production for 2010.

One of the better markets is in Winnipeg. Three university friends started a hemp-oriented company called Manitoba Harvest Hemp Food & Oil in Winnipeg in 1998 that works with both seed and oil. Today they process hemp seed into hemp nut, hemp oil, hemp powder, hemp butter and a hemp beverage. They operate from a 20,000-square-foot facility, certified for both kosher and organic products.

Trade alliance
The Canadian Hemp Trade Alliance (CHTA), a non-profit national group of processors, marketers, farmers and information specialists, was formed in 2003 to organize and represent the emerging industry. “Our membership is about 150 today, both American and Canadian,” says Kim Shukla, CHTA executive director, based in Steinbach, Manitoba. Several US companies are members. Although industrial hemp is still prohibited federally for US growers, American companies are keen to import whatever they can, after it is off the field. “Two hemp builders from Hemp Technologies came up from Asheville, North Carolina, to speak at a recent hemp building symposium,” Shukla says. “They’re using hemp hurd in a lime-based binder to build high insulation-value exterior walls in half-million-dollar, environmentally friendly, model homes.”

Potoroka says they want as much hurd as Canada can supply. “I can’t imagine where hemp could go in 10 years, but it is here to stay,” he says.