Self-limiting moth could provide incidental benefits if used in the U.S. 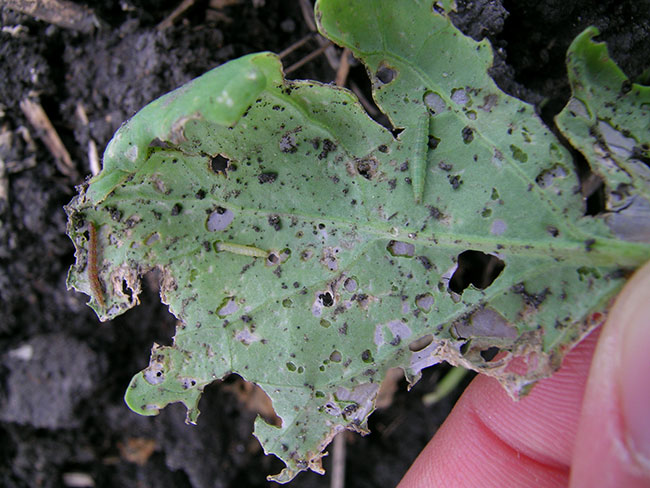 The type of feeding damage that high populations of diamondback moth can potentially do to young canola plants. Photos courtesy of John Gavloski.

They breed, but female offspring don’t survive. That’s the technology behind Oxitec Ltd.’s insect control technology. The insects contain a self-limiting gene and, when this gene is passed on to their offspring, female offspring do not survive to adulthood, resulting in a reduction in the pest insect population. The technology was recently field-tested on diamondback moth by Anthony Shelton, a professor in the department of entomology at Cornell University in New York.

“Our research builds on the sterile insect technique for managing insects that was developed back in the 1950s and celebrated by Rachel Carson in her book, Silent Spring,” Shelton says. “Using genetic engineering is simply a more efficient method to get to the same end.”

After release of males of this strain, they find and mate with pest females, but the self-limiting gene passed to offspring prevents female caterpillars from surviving. With sustained releases, the pest population is suppressed in a targeted, ecologically sustainable way. After releases stop, the self-limiting insects decline and disappear from the environment within a few generations.

Open field trials were conducted in the summer of 2017 at Cornell University’s College of Agriculture and Life Sciences (CALS) Agriculture Experiment Station in Geneva, N.Y. These trials examined the ability of diamondback moth to survive and disperse in the field.

The researchers used the “mark-release-recapture” method. A fluorescent powder was used to mark each strain before release. The insects were later captured on pheromone traps. Each released group was then identified by the powder colour and a molecular marker in the engineered strain.

The field study results found good potential for control of diamondback moth outbreaks. The self-limiting male insects behaved similarly to their non-modified counterparts in ways like survival and distance travelled.

“Our mathematical models indicate that releasing the self-limiting strain would control a pest population without the use of supplementary insecticides, as was demonstrated in our greenhouse studies,” Shelton says.

This method can be applied to all kinds of insect pests, from the mosquitoes that transmit diseases, such as dengue and Zika, to moth caterpillars that destroy corn fields. For example, Oxitec implemented a pilot project in the Florida Keys in August 2020 using this self-limiting technology on Aedes aegypti mosquitoes. The female A. aegypti mosquito is an invasive species found throughout the world that spreads dengue, Zika, chikungunya and yellow fever. It poses an increasing threat. In 2020, there were localized outbreaks of dengue in the Keys.

The diamondback moth is common wherever Brassica crops are grown globally. The pest returns to Canada each year, but the severity varies considerably from year to year. Only low levels may successfully overwinter on the Prairies, and infestations primarily come from insects blown in on wind currents from the southern or western U.S. Early arrival on the Prairies can mean diamondback moths go through up to four generations in a year, building up to economically damaging levels. 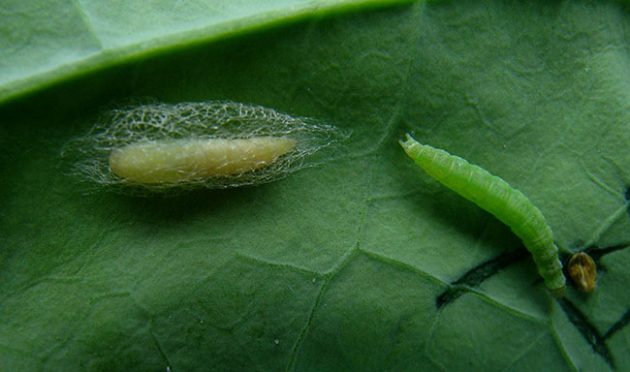 A pupa and larva of diamondback moth on a canola leaf.

John Gavloski, an entomologist with Manitoba Agriculture and Resource Development, says the technology is unlikely to be implemented on the Prairies for diamondback moth control, given the sporadic nature of infestations here. “I see this as having potential for diamondback moth management in areas where [the moth] overwinters or is an annual concern. The feasibility of rearing and releasing male moths with the lethality gene in the Canadian Prairies may not be as great,” Gavloski explains.

Similar technology has been used in Canada on the codling moth in the Okanagan Valley, where the insect causes damage to apples and pears. The first sterile codling moths were released in the South Okanagan in 1994 and in the central and northern parts of the Valley in 2002. While the program has been relatively successful in reducing codling moth populations, some damage is still seen every year – and it is expensive. The sterile release program has a full time staff of 17 and 70 seasonal staff.

Oxitec indicates that the release of self-limiting diamondback moth in the U.S. is a long way off. The approval of the release of A. aegypti mosquitoes came after the U.S. Environmental Protection Agency, U.S. Centers for Disease Control and Prevention and seven government agencies in Florida approved an Experimental Use Permit, following a regulatory assessment that included more than 70 scientific and technical documents, 4,500 pages of material and 25 commissioned scientific studies.

Prairie canola growers could see incidental benefits if the self-limiting diamondback moth be approved and implemented in the U.S., like reduced U.S. populations and fewer migrant moths. Since the bulk of Canada’s diamondback moths come from the Pacific Northwest, Texas and northern Mexico, reduced populations in these source areas could reduce pressures for Brassica crops.