Features Research Traits & Stewardship
A matter of life or death 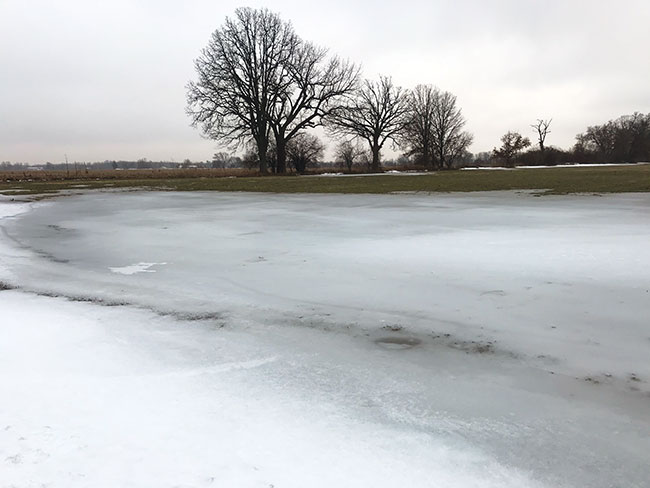 A midwinter thaw followed by refreezing can lead to ice encasement and winterkill of winter wheat. Photo by Alex Barnard.

“With winter wheat – or any other overwintering crop – we often refer to winterkill as if it is a single thing. But we don’t talk about ‘summerkill;’ we talk about insect damage, disease, drought, heat, and we talk about all the different problems separately,” notes plant physiologist Eric Lyons.

“Winterkill is a very variable problem that occurs in many different ways. If we want to improve winter wheat yields and increase adoption of perennials, overwintering ground covers and diverse crop rotations, we need to start looking at winterkill’s different mechanisms, to define them and tackle them one by one.”

And that is the purpose of a three-year project led by Lyons, an associate professor in the University of Guelph’s department of plant agriculture.

“Our project’s goal is to identify the conditions that lead to winterkill, focusing primarily on low-temperature flooding and ice encasement, because we can’t do it all in three years,” he explains.

“We want to know what conditions lead to plant death under ice encasement and what traits in the wheat plants are associated with better survival in these conditions. We are trying to help breeders develop hardier plants, so farmers will be more likely to adopt a rotation with winter wheat, especially with all the other advantages that planting winter wheat in a crop rotation gives to farmers.”

Breeding winter wheat varieties for improved winter survival is a big challenge. “The trick with studying winter survival of winter wheat in Ontario is that we don’t get winterkill every year,” Lyons says. “Instead of 20 per cent death every year, we get 80 per cent death every seven years. How do you breed for a problem that only shows its effect once every seven years?” On top of that, the plant may require different traits to tolerate different winterkill mechanisms.

Lyons’ project includes a growth chamber study to find wheat traits related to improved winter survival under ice encasement conditions. It also has field experiments to investigate winterkill risks associated with planting date and fertility. And it has modelling and mapping work to provide a greater understanding of winterkill risks in Ontario.

“One of the great things about this project is that the proposal was born out of discussions with a Masters student in my lab – Jaber Husiny – and two PhD students in our wheat program – Alexandra Ficht, who is now a postdoctoral researcher, and Rachel Whaley,” Lyons notes. “With all the COVID restrictions in 2020, they had the time to really engage in the formulation of this project.”

This research is funded by Grain Farmers of Ontario and the Ontario Ministry of Agriculture, Food and Rural Affairs (OMAFRA).

Simulating ice encasement
“By focusing on ice encasement, we can make the greatest impact with our project because a) ice encasement is pretty common, and b) we can do multiple runs of the experiment per year in a controlled environment,” Lyons explains. “If we were trying to study the impacts of winterkill for an event in March, for example, then we would have to wait for the plants to undergo a full winter before we could test them, so we could only test one set of plants each year.”

Low-temperature flooding and ice encasement happens when warm spells with rapid snowmelt and/or rainfall cause ponding, and then freezing conditions return and change the water into a solid ice cover. Wheat plants can suffocate under the ice cover in less than two weeks.

“Ice encasement is very unpredictable, and when it occurs it can be devastating,” Lyons emphasizes.

“In years when you get a consistent ice cover across a flat field, you can get 100 per cent kill. That can deter a farmer from using a crop rotation that includes winter wheat – no one likes to play a one-out-of-seven scenario with making a living.”

Husiny and Lyons have almost finished the task of figuring out how to replicate ice encasement conditions in a growth chamber. Lyons says, “We’re working hard at developing a methodology for simulating ice encasement in a controlled environment, so that the results we get will be indicative and true to what we observe in the field.”

Tolerance to ice encasement
The next step for Husiny and Lyons will be to employ their growth chamber methods to look into the factors causing winter wheat injury and death under ice encasement conditions, and to search for traits related to improved survival.

“We want to be able to say that wheat plants with these particular characteristics tend to be better at surviving ice encasement. Then breeders can screen for those traits in their breeding programs,” Lyons says.

Until now, winter wheat breeders have not been selecting for resistance to ice encasement, so the project team has to determine which traits might be most reliable and practical for breeders to use. Husiny will be measuring various physiological, morphological and biochemical characteristics in the plants and analyzing how strongly the characteristics correlate with ice encasement survival.

“We know that plant size can have an impact on winter survival. So, in our trials, we are planting later and later in the season and seeing how that affects survival,” Lyons explains.

“In Ontario, winter wheat typically follows soybeans in the rotation. Farmers want to use the longest-season soybean they can have to maximize their soybean yields. That limits the window for planting winter wheat. And as the planting date gets later and later, there’s an idea that you will increase the risk for winterkill because you will have smaller plants that haven’t yet developed the mechanisms needed to survive the winter.”

Along with the planting date treatments, the trials include treatments where phosphorus is added to the seed row at planting. The idea is to boost the seedling’s growth by providing immediate access to phosphorus. According to Lyons, other studies have shown that this practice results in a bigger wheat plant going into winter. The team wants to see whether the larger plant size means the plant will be more likely to survive the winter.

Predicting winterkill
In another component of the project, Ficht is developing a winter wheat survival model for Ontario conditions. As this model is developed, it will help Lyons to get a deeper understanding of the conditions that lead to winterkill in Ontario so he can add those conditions to his controlled-environment experiments.

The model could also help agronomists and others to predict the risk of future winterkill events. It could also provide information to help farmers better understand their own winterkill risks and make more informed decisions about managing those risks.

To develop the model, Ficht will be drawing on a range of data sources. These include historical and current weather station data and data on winter wheat yields and varietal winter hardiness, as well as data from the project’s field experiments, and some new data from specialized field sensors.

“We are working on the idea of using some novel ground-level sensors at a few locations to measure things like crown-level soil temperature, crown oxygen levels or perhaps carbon dioxide levels. We could put all these sensors right where the life-or-death situation for the wheat plant is occurring,” Lyons explains.

“The idea is that we could use the information about broader weather conditions collected by traditional weather stations and try to correlate it with the measurements from those ground-level sensors. Then we could use that for winterkill predictions, for instance, that there will likely be ice, and the ice will look like this, and these are the winterkill conditions that it will create.”

Mapping winterkill mechanisms
The project team will also be refining and updating an old map developed many years ago that divides Ontario up into regions based on the major cause of winterkill in each region.

“[On this map,] as you move from Windsor up to Ottawa, first you have a region of frost heaving and thaw-refreeze cycles. Then you get into a region with snow mould because of the more consistent snow cover, and then a region where you can have a warming event and then a quick cold event in the spring that causes a rapid killing of the plants,” Lyons outlines. “Then in the Ottawa area, you can get ice coverage that hits in January and may last until March. And up in northern Ontario, you can get low-temperature injury, where the temperatures at or just below the soil surface can fall to -30 C without a snow cover.”

He thinks that, with climate change, the old map may not necessarily be correct. “I think all of these types of winterkill happen everywhere, and I think there will be changing frequencies of the different types of winterkill based on how the weather is changing over time,” he explains.

“We have historical weather data and historical winter wheat yield data, and we can go through it and assess how accurate this map is. And once we determine whether it is accurate or not, we can make the map better.”

The updated map could prove to be a useful tool for farmers, crop advisors and others to see how the complex problem of winterkill in Ontario relates to their own area.

The results of Lyons’ project could benefit Ontario farmers in multiple ways. The findings could help towards development of winter wheat varieties with greater winter survival and could provide more information for growers’ decision-making on winter wheat planting dates and fertility practices. Overall, the results could help increase winter wheat yields and yield stability, thereby encouraging more farmers to add winter wheat to their rotations, enhancing the sustainability of their cropping systems.