New nutrition and agronomy traits will help change the face of soybean production. 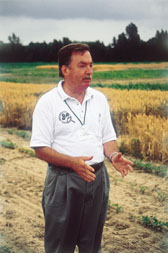 The latest in high-end technology is sending some traits down the research
pipeline that are certain to revolutionize the soybean industry for Canadian
growers, within a few years. With improvements to consumer health and agronomic
benefits, some new traits – achieved through the tools of biotechnology
as well as conventional breeding techniques – may even be enough to improve
consumer acceptance of new scientific approaches while simultaneously guaranteeing
Ontario soybeans a larger share in the marketplace.

Whether new varieties are created out of the latest in biotechnology or by
selective breeding techniques, competition among major seed companies such as
BASF, Bayer, Dow AgroSciences, Monsanto, Pioneer, and Syngenta Seeds is tight,
especially with many new traits being 10 to 15 years in the making and requiring
significant investment of money and effort.

"A number of companies have extensive research programs that are producing
exciting new traits now and in the near future, but it's a competitive marketplace
and many of them aren't ready to divulge specifics just yet," says Denise
Dewar, executive director of plant biotechnology with CropLife Canada.

Dewar says new technologies in plants typically fall under four main pillars
of benefit: nutritional enhancements, agronomy, industrial production and pharmaceuticals,
with nutrition and agronomy being developed in the near future.

Nutritional enhancements
"If there's one thing our IP system has taught us, it's that we need to
stay on top of the traits our customers want, and we need to deliver those traits,"
says Bill Riley, market development manager for Ontario Soybean Growers.

One trait sparking renewed interest is low linolenic soybeans. The University
of Guelph breeding program has been working on low linolenic soybeans developed
through conventional breeding techniques for several years. Although linolenic
acid is needed by the body, when soybean oil is used to manufacture margarines
and other food products, it often needs to be 'hydrogenated', where hydrogen
is added to the fatty acid chains. That process produces 'trans' fatty acids,
and consumption can increase the risk of developing cardiovascular disease when
it is included in the human diet.

Gary Ablett, soybean breeder and director of Ridgetown College, University
of Guelph, recalls that in the mid-1990s the university's breeding program developed
the first low linolenic soybean line with less than 2.5 percent linolenic acid
in Canada. At the time there was little interest in the material, although in
1996/97 it was released to several breeding programs in Ontario.

Recently there has been much great awareness of low linolenic soybeans as a
result of new labelling laws in the US (effective January 1, 2006). Ablett states
that while the original variety is of course no longer competitive, new lines
are in the breeding program.

The University of Guelph program is not the only one with a 'low-lin' trait.
Iowa State University and Monsanto are among others who have recently developed
similar varieties. Monsanto has put specific emphasis on improving the soybean's
oil profile, with a particular concern for the three oil components all involved
in human cardiovascular health – saturated fat and oleic acid levels, in
addition to linolenic acid levels.

Lowering saturated fat will help to meet Health Canada's dietary guideline
of consuming only 10 percent of total daily calories in the form of saturated
fat. Increasing the level of oleic acid imparts stability to an oil, and oleic
acid is also considered a positive cardiovascular health factor in the diet
because it is known to raise the level of 'good' cholesterol in the blood while
lowering the level of 'bad' cholesterol.

Ablett expects the low-lin variety he is working on to be available for commercial
production by 2007. Monsanto's first low linolenic acid soybean varieties could
potentially be introduced in 2006 in Canada but have already been announced
for commercial release in the US. These varieties also have a 'Roundup Ready'
background. Mid-oleic acid, low linoleic acid soybeans are expected to be commercialized
by Monsanto in 2008, and mid-oleic, low saturated fat soybean varieties will
be commercialized in 2011.

Agronomy
Although nutritional benefits are often the best way to see consumers endorsing
the benefits of biotechnology, the majority of benefits are most often seen
at the agronomic level, where it affects growers. A plant's resistance to insect
and disease pressure, and its adaptability to various weather conditions and
soil types are often a grower's top priority.

Art Stirling, biotechnology affairs manager for Pioneer Hi-Bred Limited, says
agronomic traits have been the core focus for that company. "Our research
program focusses on enhancing genetic yield potential and increasing the package
of key defensive rates to protect yield," he says. The company's research
network – which, like many of the larger seed companies, includes research
stations in a variety of areas around the world – focusses quite heavily
on harvestability, shattering resistance, stress tolerance, herbicide tolerance
and resistance to key diseases such as phytopthora and soybean cyst nematode.

Pioneer has been working on Asian rust in soybean since 1995, Stirling says.
"Should it be an issue in three to five years, the plan is to have resistant
material in our research pipeline."

Monsanto also has an Asian rust resistance program in development. Other germplasm
characteristics that they are working on and are expected to reach the market
are drought tolerance, improved yield and cold tolerance, by the year 2012.

Industrial
Monsanto has also expressed an interest in the industrial market, where company
researchers have been exploring the possibility of increasing the oil content
of soybeans (currently 21 to 22 percent) to more than 30 percent oil, for use
as biodiesel feedstock. Although they do have higher oil content varieties available
now, it is not known when varieties with as high as 30 percent oil would be
available.

"Canada is very well positioned for industrial development because our
highly developed IP system is capable of directing these varieties to their
specific end-use markets," says Bill Allison, chair of Ontario Soybean
Growers.

Pharmaceutical
While pharmaceutical traits in soybeans, such as edible vaccines, may sound
like something out of science fiction movies, they are a very real possibility
for technologies down the road. Unfortunately, due to regulatory constraints,
growers should not look toward growing them anytime soon.

With millions of dollars in investment, thousands of field trial applications
on file, and more than 1000 patents held, growers can trust that the major seed
companies and public researchers are committed to bringing new technologies
and benefits to the forefront of crop production.