It’s been a bad year for flax in Canada.

“Markets are suffering a bit across Canada,” says Brian Johnson, chair and director-at-large of the Flax Council of Canada.

Johnson believes the reason for the drop in acreage is the huge increase in acreage in Eastern Europe over the last seven or eight years. “Flax is volatile – when the prices go up, we over-seed a bit. We have a much bigger carryover this July than last July, because prices were better last year,” Johnson says.

In Western Canada, acreage is down 40 per cent. Johnson says a big reason for the decrease is the explosion in lentil and pulse crops in Western Canada due to the shortfall in pulse production in India. “Lentils and flax are grown in the same area and basically a lot of farmers switched from flax to lentils,” he says.

But the picture in Ontario, where flax is hardly grown at all, is relatively unchanged from the last few years. Flax acreage in the province is down to fewer than 5,000 acres, though at its peak acreage was up to 75,000 acres, according to Mike Cowbrough, weed management field crops program lead for the Ontario Ministry of Agriculture, Food and Rural Affairs (OMAFRA). Cowbrough is also the organization’s de facto “flax guy” due to the fact that he grew flax on his hobby farm for a decade.

Why the lack of flax in Ontario? Conditions in the province for growing flax are good, particularly in cooler regions such as Grey and Bruce County in central Ontario, and Verner and New Liskeard in the northeast.

Cowbrough believes there are two main reasons keeping producers from planting more acres. The first is economics. “If you look at the gross revenue potential in flax and compare it to other field crop staples, there’s anywhere from a 100 to 400 per cent difference in gross margin.

“The other potential knock against flax is that it’s never been an easy crop to harvest and the straw is a bit of an issue,” Cowbrough says. “It’s tough, it doesn’t break down, it’s difficult to spread out. It’s beautiful to grow and wonderful to look at but a pain to combine.”

From a production standpoint, the crop performs well in terms of disease and weed concerns, Cowbrough says. The main problems Ontario producers have with flax are price stability and harvesting ease.

“It’s a great crop in Ontario for harvesting earlier than soybean, and wonderful to have in a rotation with winter wheat,” he says. “If we grew more flax, our winter wheat yields would benefit from that. But it’s agribusiness, and the economics aren’t there for flax.”

Potential for growth
Troy Snobelen, owner of Snobelen Farms, a private grain producing, processing and trading company in Lucknow, Ont., says the company hasn’t processed flax in over a decade. “We got out of it because we didn’t have the volumes,” he says. “We used to bring in quite a bit of it from Western Canada, but it was hard to take a western product and add value and try to ship it to a U.S. market. It was inefficient.”

This sentiment is echoed by Steve Murray, a manager at Parrish and Heimbecker – but Murray still deals in flax, primarily for Ontario’s feed market.

“Most of our flax comes from the west, although in Ontario in the last couple of years the amount has increased,” he says. “Right now, our flax is probably 95 per cent Western Canadian, five per cent Ontario. Those numbers might change but they won’t change substantially. I can’t envision a 50-50 or anything like that.”

But there are positive indications for growth in local flax production. Formerly, producers couldn’t get crop insurance on flax, so they avoided the risk, but as of a few years ago, crop insurance is available on flax across the province. Murray believes this might make a difference.

John Gleeson, a private grain processor and trader near Moorefield, Ont., says increased local production would be of major benefit to his business. “We have big problems getting flax out west,” he says. “The railway is a joke. You can’t get rail cars for love nor money. We send our own trucks out to get flax, and we’re loading those new B-trains.”

Cowbrough says new research out of the University of Saskatchewan, funded by the Western Grains Research Foundation, will have little application in an eastern context and is unlikely to stimulate flax production in Ontario.

But the Flax Council of Canada is heavily invested in research to improve flax for food, feed and other markets – and to promote its excellent nutritional profile to stakeholders across the country. “There’s getting to be a better and better understanding of the health benefits of flax. That information is getting out there and that part of the industry is growing,” Johnson says. “There’s a lot of work to be done, but flax has a lot of potential.” 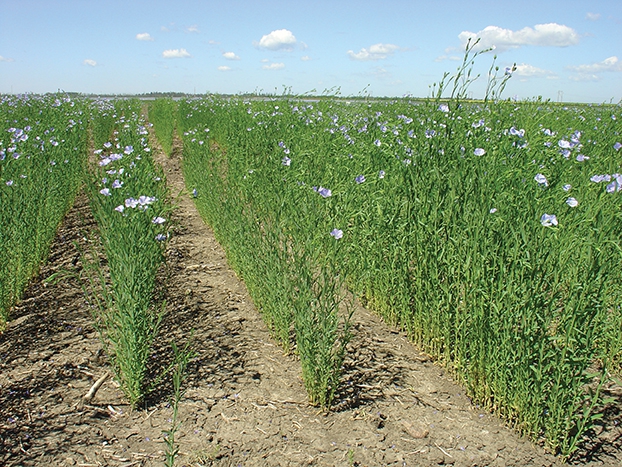