Green seed concerns may not be top of mind right now. But what you do in the spring might make a crucial difference to green seed counts in your canola crop at harvest time.

High green seed counts occur when frost or hot, dry weather deactivates the enzymes that clear chlorophyll from canola seeds as they mature. In Western Canada, most green seed problems are caused by frost; it damages those enzymes, preventing any further clearing of chlorophyll even if better weather returns. The risk of high green seed counts increases with late and uneven crop maturity.

Early seeding, early maturity
It’s no surprise that one practice to reduce green seed risk is early seeding, which helps the crop mature earlier and more consistently. Similarly, choosing an earlier maturing variety gives the crop a better chance to reach maturity before frost damage occurs. The Canola Council of Canada’s (CCC) online tool for comparing canola performance trial data makes it easy to search for varieties with fewer days to maturity and other important characteristics.

Keith Gabert, agronomy specialist with the CCC, says if you have a lot of acres of canola, consider varying your seeding dates a bit or trying different varieties to try to space out the workload at swathing time. “Swathing timing is the most critical tool to use and manage yourself away from green seed issues,” he explains. “You need to evaluate each field individually and really watch for seed colour change, and then swath at the appropriate time.” According to the CCC, the optimum swathing time for yield and quality is when 50 to 60 percent of the seeds on the main stem have started to turn colour.

Target plant population
Another springtime practice for earlier and more uniform maturity is to aim for a stand with seven to 10 canola plants per square foot. “A really key step for a successful canola crop is to make sure your plant population is high enough so the crop behaves in a predictable fashion,” notes Gabert.

Although a canola crop with as few as two plants per square foot can sometimes be quite successful, such thin stands are riskier. In thin stands, the plants tend to branch more so the field takes longer to mature and has a higher risk of green seed problems. “Especially if the field has adequate moisture and nutrition, the plants will flower and flower and flower, extending the season and making it a lot harder to get an accurate swathing timing decision,” explains Gabert. As well, thin stands tend to have a tougher time competing with weeds and a tougher time recovering if canola seedlings happen to be injured by problems such as hail or frost.

“With about seven to 10 plants per square foot, the main stem and a few side branches are predominantly determining your yield. So the stand won’t have an extended flowering period, and that makes the crop more manageable and uniform,” he says.

As a result, with seven to 10 plants per square foot, you tend to have an easier decision about when to swath, an earlier harvest, a better chance of reaching the crop’s yield potential, and less risk of frost causing a high green seed count.

To achieve that target plant population, Gabert suggests a seeding rate of 5 lb/ac as a starting point. “Obviously, the seeding rate to achieve your target would be the number of seeds per given area multiplied by what you believe your emergence rate will be. But a lot of growers and most of the seed companies don’t focus on, for instance, using a 1000-kernel weight and doing the math. Most suppliers simply recommend a 5 lb/ac seeding rate. That is perhaps not as accurate as a producer could be, but since you often don’t know the 1000-kernel weight until you pick up the bags, I suggest ordering 5 lb/ac of seed. That’s a good average seeding rate that will give good establishment,” says Gabert.

“Some growers will go below 5 lb/ac, but you can’t make that decision until you’re standing in the field on the day you’re seeding. At that point you’ll know the conditions of factors [affecting germination and emergence] like crop residue cover, soil temperature and soil moisture, and you’ll have a feel for how well your seeder is operating that day and how big of a rush you might be in.”

Avoid excessive nitrogen
Nitrogen rates are another consideration because high nitrogen levels tend to cause the crop to be vegetative for a little longer, delaying maturity by one or two days. “If you are pushing nitrogen – and particularly if you are also seeding late – you have a little more risk of having some immature plants,” explains Gabert, who recommends farmers avoid excessive nitrogen applications.

However, that doesn’t mean growers should further reduce already low nitrogen rates. “One of the most common problems limiting canola production on the Prairies is that, on average, we probably aren’t giving our crop enough nitrogen,” he says. “For many producers, the one thing that would likely improve their canola yields, assuming they have good moisture, would be adding more nitrogen.”

Other tips
Gabert identifies some other practices that contribute to uniform, rapid emergence and a healthy canola crop. “Good trash management in the previous year, so you have a fairly uniform residue cover, helps provide a good seedbed. Also, a well-thought-out crop rotation improves your odds of having a healthy stand of canola.”

Proper seeding depth may also help, since seeding too deeply can delay emergence. “Between 0.5 and one inch is the recommended seeding depth. Deeper seeding may mean that your crop struggles to establish, so you could be setting yourself up for an uneven stand and possible green seed. However, if you have light soil and good moisture, then a deeper seeding depth may not make a difference,” says Gabert.

“For instance, in central Alberta where I am, if we don’t get a frost until the middle of October, then chances are that seeding a little deeper wouldn’t matter. But if we get a frost on Sept. 10, then some growers who didn’t feel they had to manage for green seed will have some issues with it,” he adds.

“The risk of high green seed counts is as much about the weather as management. But we can’t change the weather, so we’d better manage well.” 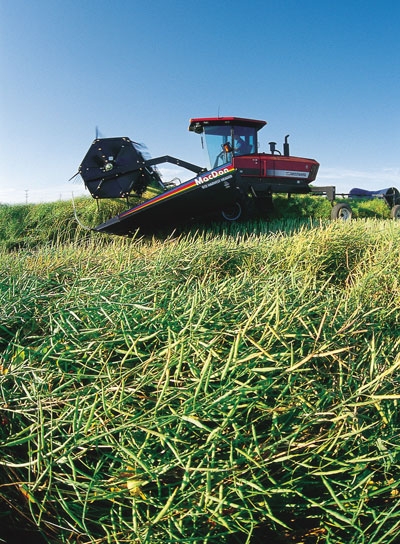 A canola stand with seven to 10 plants per square foot tends to mature earlier and more uniformly than a thin stand. What you do in the spring might make a crucial difference to green seed counts in your canola crop at harvest.