What is the optimal amount of phosphorus to maintain yields? 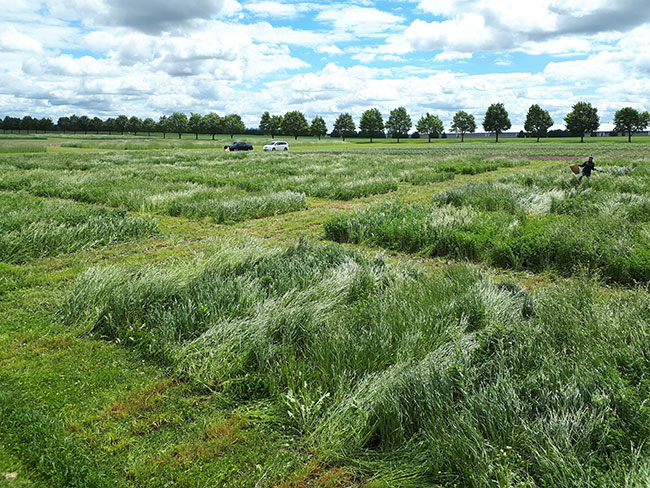 A project is underway to update and improve information about fertilizer rates for Ontario forages, especially with regard to phosphorus-use efficiency. Improving nutrient-use efficiencies could help forage growers to sustain yields while reducing fertilizer inputs, and that makes sense economically and environmentally. The University of Guelph’s Kim Schneider is leading this project, which includes three studies that are looking at this issue from different angles.

Study 1: Fertility for 19 forage options
Study 1 is an applied field trial that aims to provide information on current forage options in terms of their quality and yields over time under some current fertilizer practices. The findings might also shed some new light on forage nutrient needs and perhaps point to possible opportunities for better nutrient-use efficiencies. 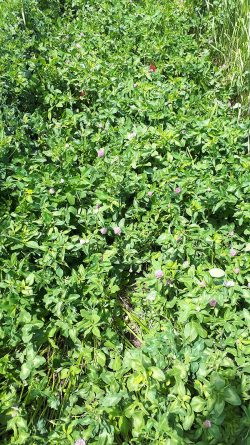 The trial was set up in 2019 by Christine O’Reilly, forage specialist with the Ontario Ministry of Agriculture, Food and Rural Affairs (OMAFRA), and Donna Hancock, forage technician at the University of Guelph. When Schneider started her new position as an assistant professor in forage and service crops in January 2020, she took on this study.

The field site is at the university’s Elora Research Station. Soil tests at the start of the trial showed the site was low in potassium (K) and a little low in phosphorus (P).

The trial is comparing 19 different forage species or mixtures under three different fertilizer treatments, from 2020 to 2022.

The forage treatments encompass varieties and species available on the market in Ontario these days, including new choices like festuloliums (crosses between a fescue and a ryegrass). The plots range from legume monocultures and grass monocultures to various hay mixtures and a few pasture mixtures.

The fertility treatments are: 1) zero fertilizer as the control treatment; 2) 100 pounds per acre of triple-19 (19 per cent each of nitrogen (N), phosphorus (as P2O5), and potassium (as K2O)), applied each year; and 3) fertilize each year as needed, based on soil testing and OMAFRA’s forage fertility recommendations.

Schneider was interested in evaluating these treatments for several reasons. “We have some new mixtures of forage species on the market and some new varieties such as festuloliums. So, a lot has changed, but OMAFRA’s forage fertility recommendations have not been updated since the 1980s,” she explains.

“As well, the OMAFRA recommendations do not distinguish between hay and pasture. But hay producers obviously are removing more biomass and nutrients compared to pastures, where a lot of the nutrients come back in the manure. So, it would make sense that hay crops should receive more nutrient inputs than pasture.

“Also, Christine O’Reilly had some anecdotal evidence that many farmers are applying a very light application of nutrients, like 100 pounds per acre of a triple-19 fertilizer, to their hay and pasture,” Schneider adds. “I’ve chatted mostly with pasture managers, and some of them apply that type of light fertilizer application and some don’t apply fertilizer at all.”

Preliminary findings and tips
Schneider and her research group have finished collecting field data for Study 1. They have done some analysis of the data from 2020 and the first cut of 2021, and will complete the rest of the analysis in 2023. 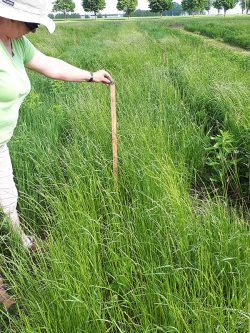 Festulolium, a cross between a fescue and a ryegrass, is one of the new forage options that are part of Study 1.

The key finding so far is that the fertilize-as-needed treatment was clearly higher yielding than the other two treatments. “Those effects became more dramatic over the study’s three years. By 2022, it was very visually obvious that the control and the light application of nutrients had very low production.”

So, Schneider recommends that hay producers soil test about every two or three years to determine the field’s starting nutrient levels. Then they can consider making a fertilizer application based on the stand’s nutrient needs.

“For hay production, the study’s results are showing that, in general, following OMAFRA recommendations is reasonable,” she says. “Typically, grazing removes about 30 per cent of the nutrients. Hay removes a lot more, and alfalfa is a big user of potassium and also phosphorus. So if you’re not applying manure to hayfields, I definitely think fertilizer is important.”

Most of Study 1’s other initial findings are in line with the expected results. For example, timothy and meadow fescue had much higher forage quality, a little higher protein, and lower yields compared to the other grasses. Also, adding a legume to a grass stand reduced the stand’s N fertilizer needs and boosted forage quality and protein content.

Schneider is looking forward to seeing what the study’s final results show in terms of the changes in stand persistence and yields over the three years and the nutrient needs of the different forage options. She hopes to identify the most productive forages and the ones with greater nutrient-use efficiencies.

Study 2: P-use efficiencies and rates
“The second study’s objective is to see if forages can maintain their yields at less than the recommended phosphorus rate, and if so, does this vary by plant type, whether it is a grass or a legume, or by species,” Schneider says. The results could allow producers to reduce their P fertilizer applications while maintaining yields.

Hancock cutting red clover with a plot-scale forage harvester in Study 2, which is examining phosphorus-use efficiencies of different forage species and mixtures.

Schneider wanted to investigate this issue because of an intriguing finding in one of her previous studies, which examined soil test P levels and hay yields on organic and conventional dairy farms. “Interestingly, we found there was no real relationship between soil test P and forage yield, which went against conventional wisdom about fertility.”

Some of those hayfields had quite good yields even though they had very low soil test P levels. “Under 10 parts per million (ppm) would be considered low with the Olsen soil phosphorus test, which is the common P test we use in Ontario. Some of the hayfields had between about 3 and 7 ppm,” she notes.

She explains that the Olsen P test gives a reasonable indication of the amount of P immediately available to plants, but it has some limitations. “It gives a snapshot in time of one pool of phosphorus, and that pool is not static. There are mineral P pools and also organic P pools in the organic matter. So there is quite a bit more P in the soil than the Olsen test would represent. And we don’t know how much plant-available P is being replenished and how quickly it is being replenished.”

So, Study 2 is a way to explore how some hayfields could have good yields despite low soil test P values. Schneider is particularly curious to see if legumes perform better than grasses when the soil test P is low.

“Legumes are known to have more relationships with mycorrhizal fungi than grasses,” she says, explaining that these soil fungi colonize a plant’s roots and then grow beyond the roots into the surrounding soil and gather nutrients, especially P, for the plant. “We also know the plants and these fungi form those relationships more when phosphorus is low. So, it might be good to have a low level of soil P to take advantage of this biological relationship, but not so low that the forage yield suffers.” 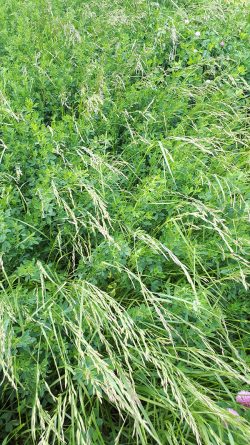 A Study 2 plot of a tall fescue and alfalfa mix.

Study 2, which is being conducted at the Elora Research Station, was established in 2021. The first production year was 2022, and the fieldwork will continue for two more years.

The study’s 14 forage treatments include monocultures of alfalfa, red clover, orchard grass, timothy and tall fescue, and various mixtures of these common forage grasses and legumes.

Schneider and her group will track the forage yields under the different treatments. As well, depending on available personnel and funding, she hopes to look at how mycorrhizal colonization varies with different soil P levels and different forage types in the study’s third year.

Initial observations
“We haven’t analyzed the 2022 data yet but, visually, we did not see a big yield effect this year,” she says. This wasn’t a surprise to Schneider, given that the average soil test P at the site was 8.5 ppm, which is low but not extremely low.

“Sometimes there isn’t a yield response to phosphorus in one year because, even though the soil test P value might be a bit low, the plant can access enough P so that the plant is not deficient. Also, we may find some subtle differences this year that weren’t obvious visually. Over the three years, we will likely see more obvious differences.”

She adds, “Based on my research, I’m not always concerned the minute I see a low soil test phosphorus value in a hayfield or pasture. Perennial forages need a steady supply of phosphorus accessed over a longer growing season, unlike annual crops which need readily available phosphorus in a much shorter time frame.”

Compared to annual crops, perennial forages have more time to extend their roots and their mycorrhizal network further into the soil to find more P, and more time to access P that becomes available over the growing season.

Schneider’s tip for forage growers who are considering a P fertilizer application is to soil test for P, but also look at other factors. Those factors include: whether the stand shows signs of P deficiency, whether the field has a good potential for higher mycorrhizal fungi populations based on its cropping history, and what are the soil organic matter (SOM) levels, which will indicate potentially available organic P.

Study 3: P and soil organic matter levels
Schneider’s third study in this project is examining the effects of SOM on P recommendations. “Our hypothesis is that we might need less phosphorus to achieve the same yield when the soil has a high soil organic matter concentration compared to when it is low.”

Study 3 is a controlled environment pot trial that will start this winter. Schneider and her group plan to compare three different soil types collected from three locations. At each location, they want to collect two soils, both with low soil test P values, but one having high SOM and the other having low SOM. They are in the process of selecting the three locations. Interestingly, the low P/high SOM sites they have identified tend to be pastures, whereas the low P/low SOM sites tend to be annual crop fields.

Her group will be characterizing the selected soils in terms of SOM and other indicators of soil health. They plan to have one or two forage species in the trial and to apply five different P rates. They will be plotting forage yield versus P rate, and then seeing how these P response curves differ depending on the SOM level.

The results could help forage growers in their decision-making about P applications. “This study could also give us a better understanding of how soil health can impact P management,” she notes. “It might also show that it is helpful to have forages in a rotation with annual crops because the forages may provide increased organic matter, which might help nutrient-use efficiency.”

Schneider concludes, “Some people say, ‘Aren’t forages environmentally friendly anyway, with a lower risk of phosphorus loss?’ I think that is probably correct, compared to annual crops. But I think it is good for all sectors to try to increase phosphorus-use efficiency, for the water quality benefits and to reduce our reliance on mined resources.”

This project has received funding from OMAFRA (through the Ontario Agri-Food Innovation Alliance), the University of Guelph, and the Natural Sciences and Engineering Research Council of Canada.