Fertigation is quite common in southern Alberta, but very, very little research has been done on it in replicated plots,” says Doon Pauly, an agronomy research scientist with Alberta Agriculture and Forestry. His recently completed study took up the challenge of assessing the effectiveness of fertigation in wheat and canola. 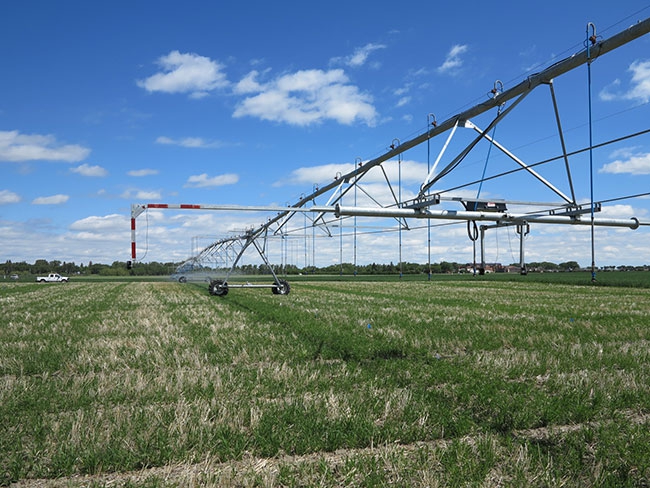 This Alberta research is one of the few replicated plot studies on fertigation in wheat or canola on the Prairies. Fertigation is quite common in southern Alberta

Fertigation – applying fertilizer through an irrigation system – can potentially offer some advantages. “In short-season crops, like wheat and canola, the vast majority of nitrogen uptake happens about four to six or seven weeks after our time of planting. Fertigation allows you to deliver nitrogen to the crop as it is needed,” Pauly explains.

“If you apply a lot of nitrogen at the time of seeding, it is potentially at risk for some kind of nitrogen loss event before the crop has taken up a lot of it. You can reduce that risk by an in-crop application.”

“And fertigation has advantages over an in-crop application of a dry product. When you apply broadcast urea in-crop, often it is surface-applied with no incorporation, so you could get volatilization losses. Also, the fertilizer is applied onto that high organic matter mulch [in no-till systems] and could be immobilized. But with fertigation you’re putting it on with water, which washes the nitrogen right into the soil. In our study, we fertigated with half an inch of water, which moves the nitrogen down to about the depth where banded fertilizer would be placed at the time of seeding. So, fertigation reduces the potential for volatile losses, it’s possibly less prone to immobilization and it’s placed where the roots can access it.”

Fertigation can also provide logistical benefits. Pauly says, “Some growers don’t want to haul all of their fertilizer at seeding and have to be stopping all the time to fill up their drill. They want to get their seeding done and fertigation is a way to do it.”

One of the challenges with fertigation is that, in a soggy growing season, the crop may need a nitrogen application even though the saturated soil doesn’t need to be irrigated and the soil may be so wet that the irrigation equipment could get stuck. Very wet conditions can be an especially serious problem if growers choose not to apply any nitrogen at seeding.

“If you get a high rainfall event that might be limiting the nitrogen [because of leaching or denitrification], then a crop that hasn’t had nitrogen from the start is probably going to be suffering even more. And there is no way you can get onto the field to correct the problem [until the soil finally dries],” Pauly says.

About the study
Pauly’s study was initiated by Ross McKenzie, who was the previous agronomy research scientist in Lethbridge, Alta. “Ross had been trying for years to get funding in place for this research, and eventually the Alberta Crop Industry Development Fund and Agrium made it happen,” Pauly says.

He sees two key reasons why so little replicated fertigation research has been conducted in Prairie field crops: “Very few people are set up to do this type of research and it is really hard to do. There was one study about 30 years ago, then this one that Ross started, and now Dale Tomasiewicz with Agriculture and Agri-Food Canada at Outlook, Sask., has a project that is going into the field in 2017.”

From 2013 to 2016, Pauly and his team conducted two experiments in Lethbridge: one with wheat and one with canola. Each experiment included 120 plots.

Each fertigation required a time-consuming effort, first to set up the nozzles to fertigate only those plots that were to receive nitrogen at that timing, then to flush the equipment to remove all the fertilizer, and finally to provide water to the remaining plots that weren’t being fertigated at that time.

As well, the plot design had to allow a considerable space between the individual plots to ensure uniform fertigation application within each plot and to prevent accidentally contaminating adjacent plots that weren’t supposed to have a fertigation application. With all that non-plot space, each experiment occupied an area of 150 metres by 100 metres. Because each experiment occupied such a large area, it encompassed a lot of soil variability across the plots. Pauly notes, “In some cases, we had to have very large differences between our treatments in order to say with confidence that those differences were due to treatment [and not to soil variability].”

“Because we were applying nitrogen when the crop is needing it, we were expecting or hoping to get a bigger bang for our buck with fertigation and see a yield benefit, especially since canola is plastic and responds to changing conditions. The fact that we didn’t see a yield benefit surprised us,” Pauly says.

In almost every case, splitting the fertilizer application didn’t help or hurt canola yields. However, in one instance the split application with fertigation at flowering produced a lower yield, which makes Pauly view this timing with some caution.

“Our site had a fair bit of nitrogen at depth and the plots were under very high-yield conditions, so I don’t think this lower yield was because nitrogen was applied too late to improve yield. To me it almost looks like we might have injured the crop under high-yield conditions with that fertigation going onto the flowers, but I can’t prove that.”

However, the fertigation applications did increase the protein levels in wheat. Pauly explains, “Especially with the anthesis timing, we got comparable yields plus one to 1.5 per cent higher protein. This protein boost is really good news in a crop like hard red spring wheat where there is the potential for a protein premium.”

He notes that other researchers have assessed the benefits of split nitrogen applications in wheat with mixed results – probably at least in part because of complexities around how much of the in-crop nitrogen application was lost through volatilization. In Pauly’s study, the results strongly indicate fertigation was getting the nitrogen into the soil and into the crop.

Irrigation around heading time in cereals is not recommended because of the risk of Fusarium head blight, so Pauly’s team tested samples in the lab for the presence of the pathogen. “Most of the time it was below detection levels. And when we did have Fusarium, it was not related to treatment. It was probably more related to how much inoculum was present.” He notes that in this study, wheat was always seeded into canola stubble, so inoculum levels tended to be low. However, if wheat is seeded into wheat stubble and more Fusarium inoculum is present, then the disease could be an issue with fertigation at anthesis.

More to learn about in-crop N
The results in both wheat and canola tend to indicate that applying all the nitrogen in-crop is always a poorer option. Another surprise in this study relates to growing season nitrogen losses. “In 2013, we had 130 millimetres of rainfall and in 2014, we had 170 millimetres of rainfall during that third week in June. With those conditions, I would have predicted substantial denitrification. And if substantial denitrification did occur, then our fertigation treatments that came after the rainfall event should have given us a nice replacement of nitrogen that was lost. But I see nothing in our data that indicates that happened,” Pauly says.

“We were pumping water off our plot area in 2014 to try to keep the plots dry – that is how much water was there. If the soils weren’t at saturation then they were probably between field capacity and saturation. And we were dealing with warm soils; there should have been lots of nitrate. Under those conditions, I would have expected lots of denitrification and that our fertigation treatments after that would give a really nice boost. So how much do we not know about denitrification?”

For future fertigation research in southern Alberta, Pauly thinks looking at a longer-season crop like corn could be useful. “From other research, we know about 75 per cent of the nitrogen is taken up by the time these [short-season] crops go into flowering. But a longer-season crop like corn is reaching its peak nitrogen uptake about three weeks later. So if you apply all your nitrogen fertilizer at seeding time on corn, then there is a really big window where a nitrogen loss event could occur,” he says. “And if a loss event occurs during that window, it could really affect corn yields because in southern Alberta the corn grows so slowly early in the season it is not taking up much nitrogen.”