For several years, edible bean growers have had to deal with the prospect of anthracnose being a problem, particularly for growers of white beans. The disease, along with bacterial blight and sclerotinia, is a challenge to growers because of its capacity to reduce yield.

Yet in edible bean production, anthracnose is an issue for a different reason; because it can mar or blemish the seed coat, making the disease a threat from a quality standpoint, in addition to hurting yield.

A trend that is taking shape in the United Kingdom is emphasizing the need for even greater control of anthracnose. In the UK, canned or baked beans are a dietary staple – they are eaten for any meal, including breakfast – and Canada is one of the major exporters of dry beans to the British Isles. However, where baked beans in North America tend to be prepared with a dark tomato sauce, diners in the UK are favouring a clear sauce for their beans. That shift means that any blemishes or marks left behind by anthracnose are more apparent and less pleasing to the consumer.

And that means greater attention to disease management in Ontario fields is necessary.

It is well accepted that compared to corn, wheat or soybeans, edible beans are a more management-intensive crop, and that disease management has more to do with guarding quality than it does yield. But just as quality is persistent in edibles, so is anthracnose. “Anthracnose is one disease that is a constant, one that growers deal with every year, and unfortunately, will continue to deal with,” says Albert Tenuta, field crops pathologist with the Ontario Ministry of Agriculture, Food and Rural Affairs. “It’s one that has been challenging to keep under wraps all of the time, and we’ve made strides, but as with anything, when you go forward, sometimes you end up going back a bit.”

Mike Bakker, brand manager for fungicides for BASF Canada in Mississauga, Ontario, acknowledges the difficulty of managing diseases such as anthracnose, especially with the demand on quality, and particularly now with the trend in clear sauces in baked beans. But as with most diseases, it is often a case of out of sight, out of mind. “Anthracnose was a significant issue two years ago, then it didn’t get as many press highlights this year, so it sounds like quality was better,” says Bakker. “But it’s one of those diseases you have to be preventative about in application, you can’t be reactive.”

Growers are familiar now
In 2009, there was a fairly widespread anthracnose infection in Ontario bean fields, and that led to significant dockage issues with buyers. “Probably the worse-case scenario, we’ve already dealt with it,” says Grant Jones, chair of the Ontario White Bean Growers Association, who farms near Hensall. “That infection put everybody on notice; it was a real learning curve and dealers realized there were a lot of costs involved with harvesting infected beans.”

The lesson learned then was to drive around and monitor those areas of a field that were hardest hit with the infection.

The reality now is that consumer trends are pushing their way back onto the farm, and growers are learning to pay closer attention to their management strategies. “You’re almost at different levels of bean production, where the highest you’d have is an edible bean, which would include a white bean, or a kidney or a cranberry bean,” explains Bakker. “A little bit lower, you go into an IP soybean, and then far below that, you get into a Roundup Ready production system, where the issue is all about how many bushels I can produce, and quality is a much lesser factor driving that decision.”

Tenuta agrees. “Edible beans require more scouting, more hands-on, not even just within season, but during the planting process and ultimately, even at harvest time,” he says. “So rotation is one thing that can help, and clean, disease-free seed is one of the most important aspects of managing this disease, particularly from an introduction early on in the season.”

Research showing slow progress
One of the key factors in dealing with anthracnose in the long term is the development of resistant varieties, which Jones believes will be available within three years. But Tenuta points out that anthracnose does not stem from a single-race pathogen. “There are differences in terms of some of the varieties, but we also have multiple and different races, and that throws a kink into the whole system as well,” he notes.

That can also have an impact on how fungicides perform. “There’s no fungicide which is curative; the vast majority of applications need to be done preventatively,” reminds Bakker.

In the case of BASF, Bakker says Headline not only provides a solid level of anthracnose control, but it also enhances plant health benefits (known as AgCelence in BASF’s program) that add to the plant’s performance, including better standability, better harvestability and increased yield potential. “This is in combination with a tank mix of Lance, because it really affects growers today in making sure they’re getting their sclerotinia product on, which is another key part of ensuring that you’re going to get a high-quality sample.”

Jones mentions that Quadris is another option for control of anthracnose.

Beyond the farmer’s “bottom line,” however, is this growing reality for row-crop producers, particularly in North America: the consumer does have a say in what is happening on the farm, particularly with edible bean products.

“People don’t realize that any edible crop, a food crop, and 95 percent ends up in a can or on a plate somewhere in the world,” says Jones, adding that anthracnose is not a health hazard, but just unsightly. “It’s purely cosmetic, but it’s the first thing the consumer looks at – it’s that first glance when they take the lid off.” 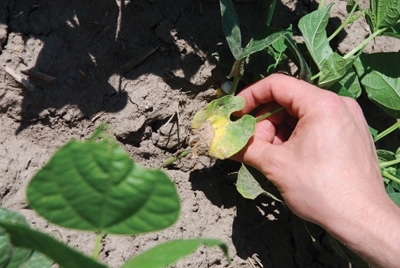