In the late 1800s, Canadian wheat breeders began their quest to develop top-quality bread wheat varieties adapted to western Canadian conditions. Luckily they had Red Fife, a very good milling and baking wheat, as a starting point. Its genetics are the basis for many generations of western Canadian hard red spring wheat varieties. Now, a project is proving that Red Fife’s descendants have the same or better milling and baking performance and the same nutritional goodness as Red Fife, while having greatly improved agronomic performance.

Or, to put it another way, the project is disproving recent claims in the popular media that today’s wheat varieties are not as good as heritage wheats.

The project is called Red Fife and Descendants. It is a joint effort of Dr. Ron DePauw and Dr. Richard Cuthbert, wheat breeders with Agriculture and Agri-Food Canada (AAFC), Dr. Nancy Ames, an AAFC cereal research scientist, Dr. Nancy Edwards, a cereal chemist who was with the Canadian Grain Commission when the project started in 2011, and now Dr. Bin Xiao Fu, who has taken over for Edwards in the project.

The researchers have evaluated the agronomic, nutritional, and milling and baking properties of 20 hard red spring wheat varieties. These varieties span more than a century, ranging from three heritage wheats from the 1800s – Red Fife, Ladoga and Hard Red Calcutta – to Marquis, released in 1909, and all the way to CDC Utmost, registered in 2010 (see Table 1).

In the beginning
“Wheat was brought to Canada by settlers, missionaries, fur traders and so on. Canada’s first prime minister, Sir John A. Macdonald, realized that to settle the west, and build this nation from coast to coast, you had to have people on the land. And to have people on the land you had to have economic activity and food. So one of the first things that they did was to figure out what could be grown on the Prairies [and] exported, and return some value to the people who grew it,” explains DePauw.

“They knew that Red Fife grew in Western Canada and that it was considered a very good milling wheat. William Saunders, who was the first head of the Experimental Farms system in Canada, which is now Agriculture and Agri-Food Canada, wanted to develop a wheat variety with the milling and baking properties of Red Fife but with earlier maturity because Red Fife was too late, resulting in crops being frozen.”

Red Fife is thought to have come from Galicia, now part of Poland and Ukraine. It is named for David Fife, an Ontario farmer who was the first to grow it in North America. He started growing it in 1842, and by the 1880s it was being grown in various places in Canada.

Saunders and his sons crossed Red Fife with Hard Red Calcutta, and from that cross came the famous Marquis wheat. “Marquis was the variety that really opened up the West and was the economic foundation of Canadian agriculture. It was well adapted and had very good quality,” says DePauw.

Almost all Canadian wheat varieties can be traced back to Marquis and Red Fife. DePauw gives some examples: “Marquis became susceptible to stem rust, so breeders added stem rust resistance to Marquis and retained its milling and baking properties, and that became Thatcher. When Thatcher became susceptible to some new strains of stem rust, they built in resistance to those virulent strains to create varieties like Canthatch and Neepawa. And then they added more resistance genes to deal with changes in leaf and stem rust and came up with other varieties. And they incorporated resistance to the wheat stem sawfly to create varieties like Rescue, AC Eatonia and Lillian. And so on. But they were always selecting for the milling and baking properties of Marquis and therefore Red Fife.”

Building on an excellent foundation
DePauw, Ames and Edwards were interested in conducting the Red Fife and Descendants project for two main reasons. “One reason was that people are putting out information that Red Fife, or heritage wheats, are much better than contemporary wheats. And some people have approached me for information about Red Fife,” explains DePauw.

“The other reason was that there are a number of what I would call unscientific books and other popular press articles, which aren’t based on nutritional evidence, that are claiming that modern grains are not healthy and lead to adverse effects on humans.” One of these recent books claims that breeders have made changes in wheat varieties over the last 50 years that are “drastic” and “bad.”

To test the claims that heritage wheats are somehow different from today’s varieties, the researchers set out to answer the question: what are the differences, if any?

DePauw grew the 20 wheats in replicated trials at Indian Head and Swift Current, Sask., from 2011 to 2014. He assessed the agronomic performance of each variety, and he provided the samples to Ames for the nutritional analysis, and to Edwards and Fu for milling and baking analysis.

“To evaluate the agronomic performance, we looked at attributes like grain yield, days to maturity, straw strength, plant height, test weight, 1000 kernel weight, protein content, diseases like the rusts, Fusarium, and so on,” says DePauw.

The results show many major advances in agronomic performance since the late 1800s. “We found that grain yield has increased, the time to maturity has been reduced, and the straw is shorter and stronger, resulting in better standability. There are improvements in test weight, protein content, water-use efficiency and nutrient-use efficiency. And there are benefits to the environment because you don’t have to spray for some of the diseases and insects.” For example, the varieties with tolerance to midge yielded about 45 per cent more than Red Fife. Other varieties, such as Carberry, yielded more than Red Fife and had significantly higher grain protein content and shorter, stronger straw than Red Fife.

Ames and her lab have almost completed the nutritional analysis. They are evaluating a wide range of nutritional components like carbohydrates, fat, fibre and protein, as well as bioactive compounds that could have significant human health benefits. They have found that today’s varieties are just as nutritious as Red Fife.

The milling and baking quality analysis is showing that our modern varieties are as good as Red Fife, and sometimes even better. In general, the descendants of Red Fife have improved dough strength, improved water absorption capacity and improved baking performance.

To people who are concerned about claims that today’s wheat varieties are not as good as heritage wheats, DePauw says, “Where’s the evidence to support those claims?”

He points out the Red Fife and Descendants Project is just one example of studies looking into those claims. “Other researchers in the United States, Europe and so on are doing the same kind of studies, looking at the range of grains that have been grown over time, and they cannot find any support for the assertions that whole grains are a health issue.”

DePauw and his colleagues are hoping to start some new research in the years ahead to explore other questions related to wheat, gluten and nutrition. “We want to ask questions like: What is the digestibility of the proteins when you compare one kind of processing to another one? What happens to the bioavailability of the minerals when you manufacture a food one way compared to another?”

He adds, “I enjoy working with my research colleagues very much because there are so many fascinating unanswered questions out there.” 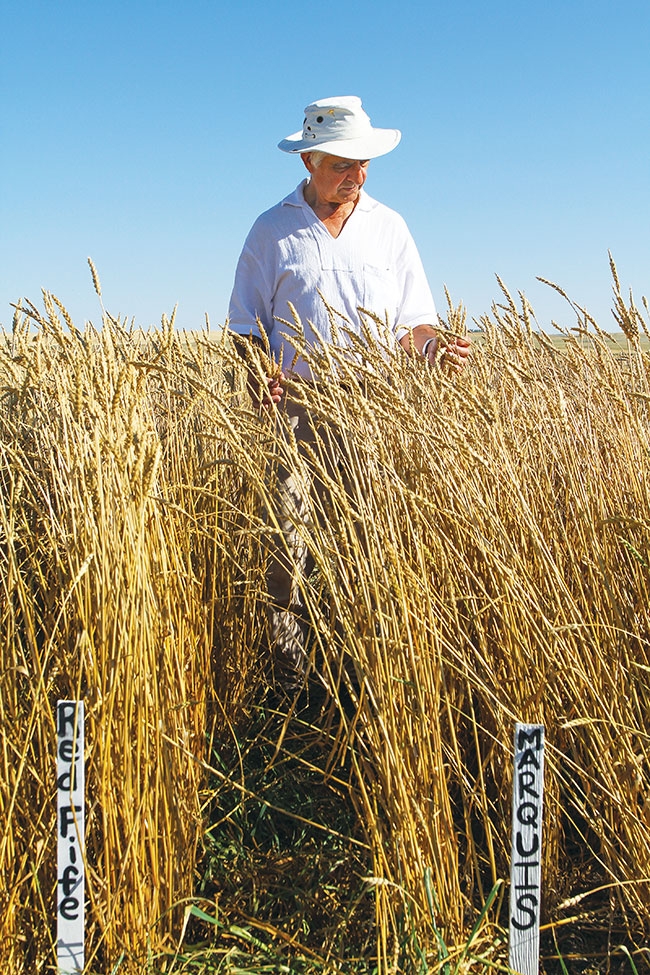