A fungus native to Saskatchewan helps control both Fusarium and its toxins. 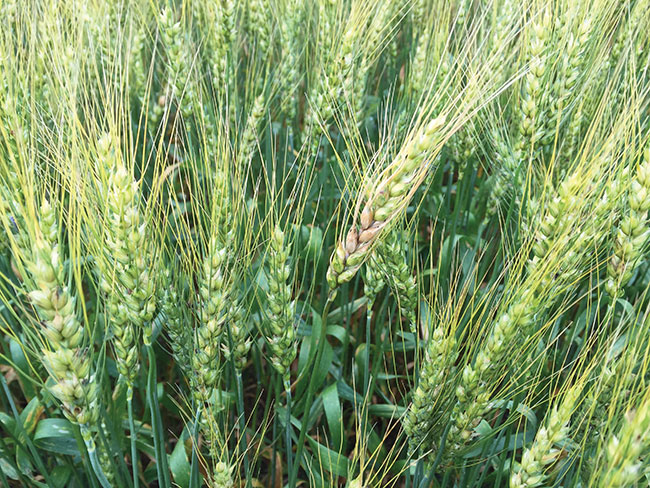 As cereal growers know, Fusarium head blight (FHB) is a major threat, as it not only reduces crop yields but can also produce toxins that limit the end-uses of the grain. Neither resistance genes in crops nor chemical fungicides provide complete control of this disease. So, Saskatchewan researchers are working towards commercialization of a new option for FHB control, using a unique fungal parasite that attacks both the Fusarium fungus and its toxins.

Vladimir Vujanovic, an associate professor at the University of Saskatchewan, discovered this parasite a few years ago after a long search. As a microbiologist, he had been working on various Fusarium species causing disease in diverse plant species, ranging from asparagus, to oak, to wheat. And that got him thinking.

“My hypothesis was that, since Fusarium is so widely present, there should be some organisms that control the fungus’s population. So in 1996, I started to analyze all taxa diversity – all microbial organisms associated with a particular sample – to try to find organisms that might offer a natural way to control Fusarium.”

Using that approach, Vujanovic eventually discovered a fungus that was parasitizing Fusarium in samples collected from Saskatchewan wheat fields.

Vujanovic and his research team have confirmed that this fungal parasite, or ‘mycoparasite’, is a new species, which is now called Sphaerodes mycoparasitica. He adds, “Because discovering this mycoparasite was quite difficult, only our laboratory has this unique species.”

A fierce little foe of FHB
Since that discovery, Vujanovic and his team have been working with this mycoparasite to better understand how it affects FHB. This research has included molecular studies as well as experiments in the greenhouse, the field and the controlled growth chambers at the university’s phytotron.

Their findings show Sphaerodes mycoparasitica has strong potential as an FHB biocontrol product for several reasons.

One key characteristic is that the mycoparasite has just the right amount of specificity in the range of fungal species that it parasitizes. “Most of the microbes used for commercial biocontrol products are generalists; they attack many different organisms. Such products have the potential to harm beneficial microbes as well as pathogens,” explains Vujanovic, who holds the Agri-Food Innovation Chair in Agricultural Microbiology and Bioproducts at the university.

Vujanovic lists five other characteristics that help make the mycoparasite a good choice for the battle against FHB.

“First, it reduces the amount of Fusarium cells in a plant. Second, it turns off the genes in the Fusarium fungus that are responsible for manufacturing the different toxins produced by different Fusarium species, such as deoxynivalenol (DON), zearalenone, aurofusarin and fumonisin. So those genes stop producing toxins.”

He adds, “A chemical fungicide has just the opposite effect on Fusarium toxins. We have published research showing that Fusarium produces mycotoxins as a defence mechanism. So my suggestion is: don’t fight Fusarium with something that is trying to kill it because that will just cause Fusarium to develop defences that produce more toxins than usual.”

“Fourth, the mycoparasite actually uses the Fusarium mycotoxins as a carbon source for energy. So it decomposes the toxins, degrading and detoxifying them,” he says.

“And fifth, given that the mycoparasite is tolerant to mycotoxins, it could also be tolerant to other toxins, such as synthetic pesticides used in agriculture.” In previous research, Vujanovic and his collaborators showed that the mycoparasite can be used in combination with chemical fungicides. Using this type of integrated approach would enable crop growers to reduce their use of chemical fungicides when fighting FHB.

This three-year project, which started in 2018, is funded by the Saskatchewan Wheat Development Commission and Saskatchewan’s Agriculture Development Fund. The research is also supported by the Natural Sciences and Engineering Research Council of Canada (NSERC), which has provided funding for Vujanovic’s Sphaerodes mycoparasitica research for many years.

He explains that the scale-up research is key to moving forward on commercialization. “The first thing that companies want to know is whether this mycoparasite biomass can be produced on a commercial scale and be cost-efficient. The mycoparasite is biotrophically related to Fusarium [in other words, it feeds on a living Fusarium host]. Usually it is difficult to grow biotrophic organisms outside of their host. I know of only one commercial biocontrol product today that uses biotrophic-specific mycoparasites, and that product is efficiently used in greenhouse systems but not in the field.”

Fortunately, the project has now shown that scaled-up production of Sphaerodes mycoparasitica is possible. Working in collaboration with Vujanovic, a team at the Saskatchewan Research Council has successfully produced the mycoparasite biomass using a system that simulates commercial-scale production.

Vujanovic and his team are using this biomass in their field trials.

In Vujanovic’s Fusarium-inoculated plots, the plants treated with the biocontrol product (left) are healthy while the untreated plants (right) are diseased.

One of Vujanovic’s research technicians applies both the biocontrol product and a chemical pesticide spray to evaluate options for integrated FHB control. Photos courtesy of Vladimir Vujanovic.

Field trials
“Testing the mycoparasite under field conditions is very important because many biocontrol organisms show good potential when tested under greenhouse conditions but not in the field,” notes Vujanovic.

He has designed the field trials to cover the types of situations that Saskatchewan growers encounter with the pathogen, the host and the environmental conditions related to FHB development.

The trials also include a range of moisture conditions. He notes, “In 2018, the first year of the trials, the weather was dry, with less than 40 per cent of the average precipitation. In 2019, moisture conditions were relatively normal.” As well, one of the sites is irrigated, and the other sites are mostly non-irrigated but have a few irrigated plots for comparison.

The team is measuring crop yields and FHB symptoms in the plots. After harvest, they measure the mycotoxin levels in the grain, and examine the genes in Fusarium that manufacture mycotoxins to see if those genes are turned off.

Promising preliminary findings
The team has one more year to go in the field trials, so they can’t draw any firm conclusions yet. However, the results so far look promising. The biocontrol product is reducing FHB impacts and boosting crop yields.

“Overall, whatever application method you use, the effect is positive,” Vujanovic says.

The preliminary results suggest the foliar application may provide the most consistent results across all the varieties, whether the mycoparasite is applied alone or in combination with a fungicide. As Vujanovic notes, any product for controlling FHB needs to control the pathogen during flowering, the critical infection time for development of the disease.

Their initial findings also indicate that applying the mycoparasite on the crop residue after harvest could reduce the primary infection of Fusarium in the spring. “Although infection in the spring is relatively low, it is important because it allows establishment of Fusarium,” he explains. “Our application on straw is resulting not only in a positive effect on controlling Fusarium head blight but also a positive effect on plant growth.”

He thinks a straw application might be of particular interest to organic growers. Not only is the mycoparasite a natural way to manage Fusarium and its mycotoxins, but this application option would give organic growers who are trying to use less tillage an alternative to burying infested crop residues.

Vujanovic is hopeful that the seed treatment will also be a good option. “I know that farmers are usually more interested in seed applications, and I agree with them. Assisting with the seed germination process and early plant growth, establishment and health is very important,” he notes.

Results so far show that some of the cereal varieties in the trial are consistently improved by the mycoparasite application across years and geographic regions, whereas other varieties have year-to-year variations in how well they respond to the product depending on the weather conditions. Vujanovic says, “Our strategic partnership with experienced Saskatchewan breeders is well suited to explain these differences in varietal responses.”

The greatest improvements in disease control and crop yield are for the FHB-susceptible varieties. But the FHB-tolerant varieties also benefit from the mycoparasite applications.

It’s not clear yet if the yield benefits from the biocontrol product are entirely from the mycoparasite’s attack on Fusarium, or if the mycoparasite is also acting as a plant growth promoter and stimulating the plant’s immune system to some extent.

In 2020, Vujanovic and his team will be completing the field trials, and finalizing their work to fine-tune the dosage and optimize the formulation of the product. The data from this project will be used in the processes required for product registration and commercialization.

Exciting potential benefits
FHB is one of the most important cereal diseases in Canada. If the biocontrol agent lives up to its promising results so far, it could provide significant benefits to cereal growers and others in the cereal value chain.

“This biocontrol product could help Prairie crop growers in different ways. It could prevent [Fusarium] root disease and help plant establishment, which could provide yield benefits. And it could improve crop yield and grade by reducing Fusarium head blight infection and by reducing the amount of mycotoxins in the grain,” he explains.

“Prairie farmers are famous for producing grain with low amounts of mycotoxins, but in years like 2016, where the weather conditions really favoured the disease, farmers face this problem. If we could lower the mycotoxin levels in such years, that would allow the grain to be sold into more markets, and farmers would get a better price for their grain.”

For conventional crop growers, the biocontrol product could be a valuable addition to their toolbox for FHB control, to complement the use of chemical fungicides or FHB-tolerant varieties.

The biocontrol product could be especially important for organic producers. Vujanovic explains, “Organic growers don’t have the option of using chemical fungicides, so they have a relatively limited number of tools to counter FHB. They could really benefit from products that use natural organisms to fight Fusarium.”

He also notes, “Food industries benefit from the farmers’ efforts to produce clean grain because removing the mycotoxins can be difficult for food processors.” In fact, Vujanovic is hoping to work with some people in the food industry to see if it might be feasible to use the mycoparasite and a battery of its degradative enzymes to reduce Fusarium toxins in food processing systems.

This fascinating little mycoparasite shows promise as a practical tool to fight the serious threat of FHB by improving grain yield, quality and safety.